Soon, hard rains will hit the steep hillsides of the Azuero Peninsula in Panama, sluicing soil into the rivers and out to the sea. Centuries of slash and burn agriculture have left fewer trees to stand against the annual deluge of water during the rainy season. The erosion makes it harder for ranchers to grow good pasture for their cattle and food for themselves on the land that’s left behind. But an ambitious plan led by the Azuero Earth Project (AEP), an international nonprofit organization based in New York and Panama, may help reverse that pattern.

By enlisting the cooperative efforts of hundreds of ranchers and researchers, AEP aims to replant a swath of tropical dry forest, connecting the dry tropical Achotines Forest on the Pacific coast to the cloud forest in the Cerro Hoya National Park. The trees along the 140-kilometer (80-mile) wildlife corridor will create a continuous habitat for the Critically Endangered Azuero spider monkey (Ateles geoffroyi azuerensis) and improve the soil for people who farm and ranch along the way.

“We’ve focused on reforestation because it’s a key environmental and economic issue,” said Roman Yavich, the development director for AEP. “Deforestation has led to less habitat for the spider monkeys, but it’s also led to less productive soil.” 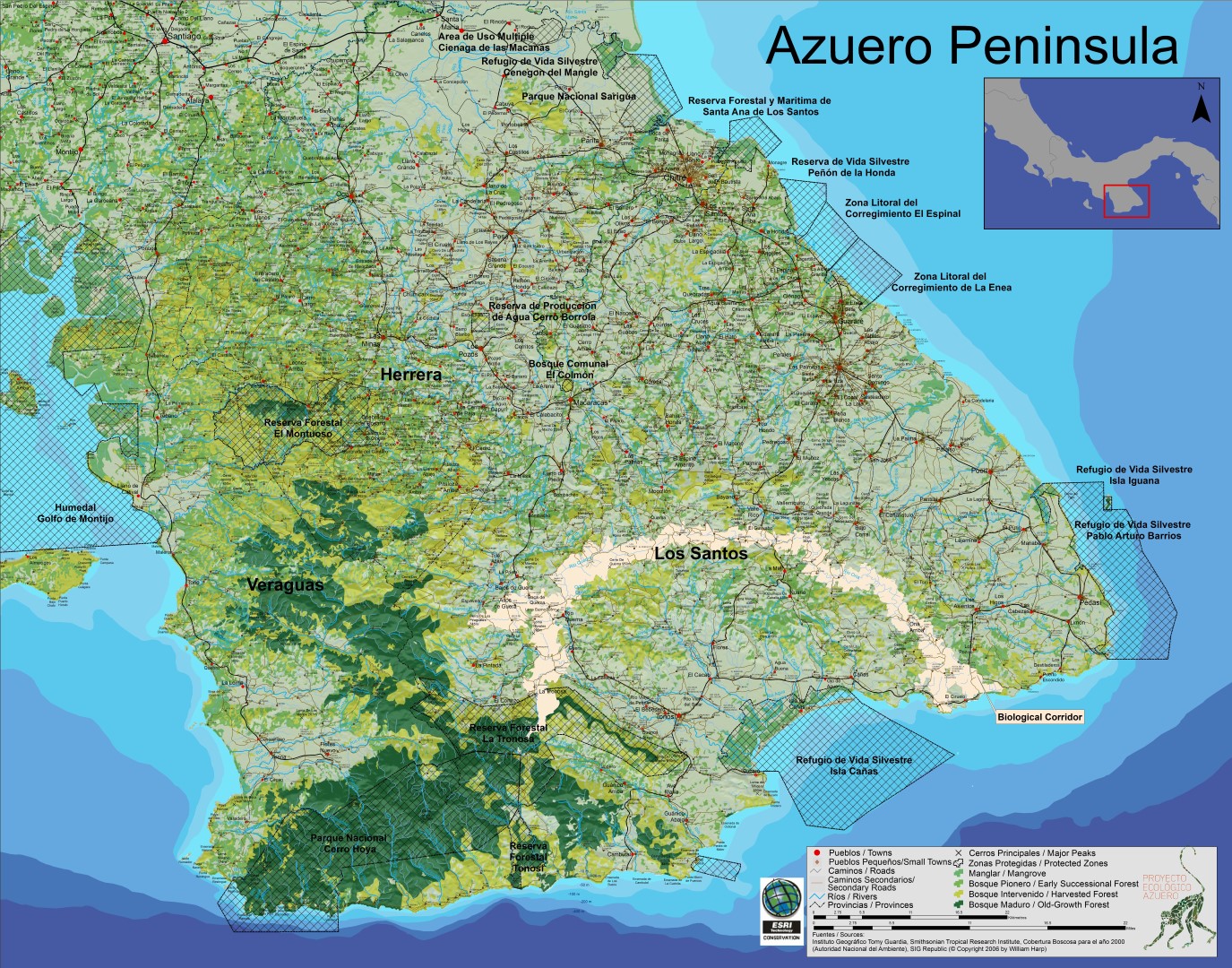 As planned, the wildlife corridor will span 140 kilometers (80 miles) and connect dry tropical forest along the coast to cloud forest further inland. Corridor map developed by Guillermo Durán and formatted by Ryan Dibala. Click to enlarge.

Sometimes called “the heartland” of Panama, the Azuero Peninsula is about 100 kilometers (60 miles) wide and 80 kilometers (50 miles) long, and lies along the Pacific Coast of the country. Just four hours south of the bustling capital of Panama City, the area is touted for a slower pace of life rooted in its 17th century Spanish origins. In many ways, the cattle ranching and subsistence farming hasn’t changed much since the Peninsula was settled. But traditional ranching methods have almost wiped out much of the tropical dry rainforest.

Five hundred years ago, there were 500,000 square kilometers (200,000 square miles) of tropical dry forest, stretching from western Mexico down to Panama, according to biologist Daniel Janzen, a professor at the University of Pennsylvania. Now, dry forests are considered one of the rarest tropical ecosystems. “If there is to be a conserved neotropical dry forest wildland large enough to maintain the organisms and the habitats that were present when the Spaniards arrived…then we will have to grow it,” wrote Janzen, twenty-five years ago. It’s even more true today.

In the area the AEP has designated for the wildlife corridor, less than five percent of the original forest cover remains. Of the trees that still stand, few are old growth native species such as mahogany, cedar, or teak. Dry tropical forest isn’t known for the concentrated biodiversity of its rainforest counterpart. Its ecosystem alternates between drought conditions, when deciduous trees shed their leaves, and deluges of rain. Because of these harsh conditions, plant species grow more slowly.

The farming cycle coincides with the rainy season. December through April is dry, with rain beginning in earnest in June and July. Farmers burn their fields when they believe rains are on the way, said Jonathan Clay, the education programs director for AEP. Without vegetation to blunt the force of the rains or soak up the moisture, the barren hillsides funnel the ash-laden water into narrow rivers, leaving the soil depleted of nutrients.

“Slash and burn can be sustainable at low population density levels,” said Clay. “But we’ve exceeded those thresholds here and the land doesn’t have enough time to recuperate.”

To improve land use – and crop yields – much of AEP’s efforts go toward sharing new strategies to improve soil performance. They’ve developed a series of eco-guides about improving soil resilience without resorting to pesticides and fertilizers. One way to return nutrients to the soil is silvo-pastoralism, which combines trees with pastureland. Or, instead of barbed wire, farmers can plant “live fences” using tree stumps that flower in the rainy season and benefit pollinators and other wildlife. Initial reforestation efforts focus on rebuilding multi-story tree canopies along rivers.

Forest fragmentation is a big problem in Azuero Peninsula. Agricultural and other human developments have whittled what dry forest is left into scattered islands, barring the natural movements of many wildlife populations. To figure out how to close the gaps between the forest fragments, researchers made a series of layered maps that accounted for resources such as water, nearby villages, interested landowners, and wildlife sightings. With the maps, they developed an algorithm to plot the arc of the corridor. But the route isn’t written in stone. More than 400 landowners live along the borders, and some are more conducive to reforestation than others. 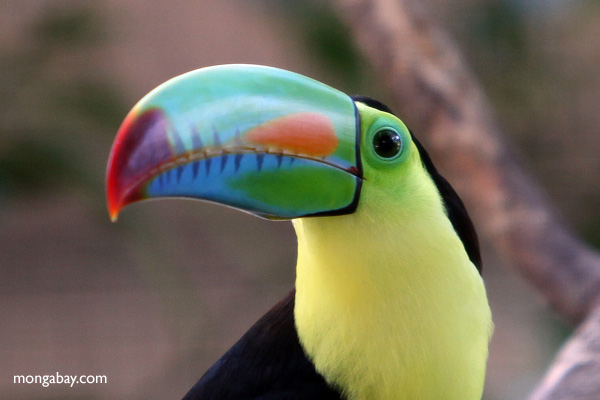 Panama is home to many species, like this keel-billed toucan ((Ramphastos sulfuratus). Photo by Rhett A. Butler.

Collaboration is key to the project’s success. Unlike the creation of wildlife corridors in other countries, no one is buying parcels of land to make this project work. Instead, AEP is relying on landowners to voluntarily permit the rewilding of their land.

“It will be a challenge to build the consensus that we need,” said Yavich.

Community outreach is a big part of the effort to garner support. An upcoming conference at the end of May, “Options for Productive Sustainable Landscapes Across the Azuero: learning from experts and local experience,” will bring together experts from all over the world along with local farmers and ranchers. The conference will also include programs for the children who will one day inherit the land.

However, even if every stakeholder gets on board with the project immediately, it will still take time to grow a forest – about eight to 15 years to see trees with significant canopy cover. In the meantime, AEP is eager to work with researchers as well as citizen scientists.

“We need surveys of wildlife, flora, and fauna to develop baselines and determine the impact of this project,” Yavich said. “A lot of information is simply not known about this area.”

Jessica Fort is a researcher who worked with AEP during her Peace Corps service in Panama. Now she’s returned to study jaguars as part of her master’s degree work at Southern Illinois University. Along with her advisor, Clayton Nielsen, they’ve nearly finished conducting their first large field season, placing around 30 remote sensor cameras along trails and areas that wildlife frequent in Cerro Hoya National Park. They’ll do similar surveys during next year’s dry season. Will the jaguars use the corridor when it’s complete? “We hope so,” said Nielsen.

Although the wildlife corridor is a major undertaking, it’s not without precedent. Since 1987, Costa Rica has been working to protect the 50-kilometer (30-mile) “Path of the Tapir” that covers more than 30 major rivers and habitats that range from marine sanctuaries to forest preserves. But nothing compares to the Mesoamerican Biological Corridor, an initiative that looks to incorporate 900 square kilometers (350 square miles) for wildlife migrating between Mexico and Colombia.

“Just think, someday we could be connected to that,” said Yavich.

(03/19/2014) Mongabay.org, the non-profit arm of environmental science web site Mongabay.com, has selected winners of three environmental reporting prizes under its Special Reporting Initiatives (SRI) program. The three prizes, which were launched in January, explore the impacts of rising human consumption on forest and marine ecosystems. The winners, selected from more than 150 applicants by a panel of issue-area experts, include Robert S. Eshelman, Ruxandra Guidi and Bear Guerra, and Dominic Bracco II and Erik Vance.

(03/19/2014) A new short film, entitled La Trocha, highlights the plight of the Wounaan people in Panama, who are fighting for legal rights to their forests even as loggers and ranchers carve it up. The conflict turned violent in 2012 when local chief, Aquilo Puchicama, was shot dead by loggers.

(01/23/2014) Secondary forests, which are areas that were previously cleared of old-growth cover, now comprise the majority of the forested areas in the United States, Europe, and elsewhere. A heavily debated issue is to what extent secondary forests are able to contribute to the preservation of biodiversity. In an article published in PLOS ONE, a group of researchers from the Smithsonian Tropical Research Institute led by Michiel van Breugel evaluated the biodiversity preservation potential of secondary forests.

For agoutis, the night is fraught with peril

(01/15/2014) In a study recently published in the online Animal Behavior journal, scientists from the US and the Netherlands have examined the impact of predation patterns on prey’s food foraging habits. The two-year long study on Barro Colorado Island, Panama, focused on the predator-prey relationship between the Central American agouti (Dasyprocta punctata), a common rainforest rodent, and the ocelot (Leopardus pardalis).