Commentary by Paula Kahumbu on 13 December 2012 Royal Malaysian Customs have just announced the seizure of 24 tons of ivory in Port Klang. This is the largest-ever seizure of ivory in transit through the country. The 1,500 pieces of ivory came from over 750 elephants and were exported from Togo, a tiny west African country that has fewer than 200 elephants. The ivory was hidden in containers containing wooden crates that were built to look like stacks of sawn timber. The two crates were shipped from the port of Lomé in Togo, and were going to China via Algeria, Spain and Malaysia. Richard Leakey, the former Director of the Kenya Wildlife Service (KWS), who set Kenya’s ivory stockpile alight in 1989, responded to the announcement.

“We have been warning that the ivory trade is out of control for some years now. This seizure is equal in size to all of the ivory seized in 2011 from Africa and it represents the tip of the iceberg. Unless African governments and donors respond, there will be no elephants left”.

Bonadventure Ebayi, CEO of the Lusaka Agreement Task Force the African Interpol for wildlife, echoed Leakey’s statement, He says he is not at all surprised with this seizure, and he predicts many more to come. Togo has virtually no law enforcement to speak of—in trafficking circles it is considered something of a free port. It is a country through which timber from other central African countries is exported by both China and Malaysia. The ivory, he believes, came from several central African countries. 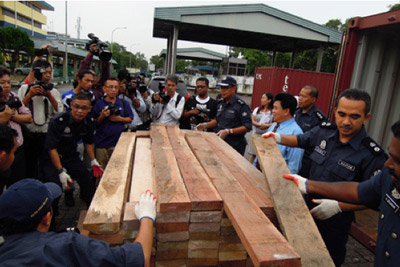 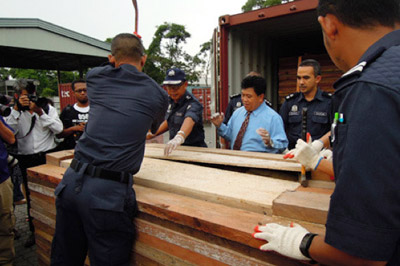 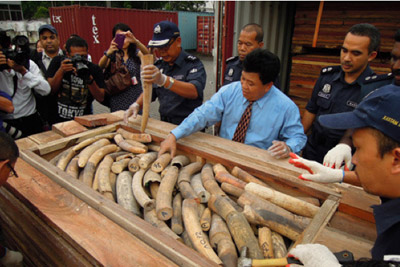 The ivory bust in Malaysia. Tusks were concealed in a container meant to look like stacks of sawnwood. Photos © Elizabeth John / TRAFFIC

The size of this shipment reveals that it probably took months for the dealers to accumulate this volume of ivory, which was smuggled on small boats. Togo is notorious for slack enforcement and the dealers of this ivory clearly operated without any hindrance, according to Bonadventure, who says the problem is corruption. “Nothing would make a consignment of 1 ton, or even 500 kg of ivory through a port without corrupt practices,” he said, adding that the Togolese government seems to care little about the illegal trade going on at Lome. Nor is it likely that the Malaysian or Chinese governments will do anything about this seizure

Apart from one seizure of ivory in Singapore from several African countries which was returned to Kenya and later burned, none of seizures of African ivory in Asia have been returned to the country of origin. Investigations are not carried out, and there is no system of monitoring the contraband. At the end of the day this ivory will become “owned” by Malaysia.

The reason for this apparent lapse in investigations and monitoring of illegal ivory is money, or rather, lack of money. The law enforcement agencies of Africa are extremely poorly resourced in terms of man power, equipment and funds considering the work that they are expected to do. The ivory syndicates are operating on mega budgets of tens or hundreds of millions of dollars. African enforcement agencies which are expected to monitor all ports, and all wildlife, are cash strapped.

Moreover, there is a general lack of political will in the governments concerned. Many African countries wildlife agencies are dependent on support from the US Fish and Wildlife Agency, which is its self a national agency in USA, not an international agency. The US Fish and Wildlife Agency receives its funding from the US government. Why aren’t African governments financing their wildlife agencies adequately? International agencies and CITES agencies are spending hundreds of thousands of dollars on monitoring elephants and writing reports for CITES conferences – their budgets often exceeding those of the government agencies. The reports often say that the problem is that law enforcement is lacking in Africa. It’s a tail-chasing exercise. Hillary Clinton has raised concern in Congress about the scale of illegal trade of wildlife in Africa, but the silence from African leaders is deafening. Not one of them has echoed her call for addressing the problem.

We need to rethink our priorities in Africa

To turn things around, a lot of work needs to be done.

I asked Mr Ebayi what he thought of the Memorandum of understanding between Vietnam and South Africa would make a difference for rhino, and if we should pursue a similar arrangement with China on ivory. He wondered aloud what a piece of paper would achieve. “So long as the culture of consuming ivory and rhino horn are not addressed the demand would remain”. He asked for and end to all the talking and concrete proof of actions taking place on the ground.

(09/27/2011) Hundreds of thousands of Kenyans are supporting government efforts to enact progressive new policies through its Vision 2030 initiative as it promises to lift us out of a depressed economy and to take us onto a path to becoming a prosperous developed nation. For this to occur, development must be sustainable —but for now what the people want and need most is for the basic necessities for life to be assured like adequate water, sanitation, energy, health, education, homes, and jobs. It is unfortunate that some of our leaders are mistaken in believing that this means Kenya should look like USA or Europe with concrete cities and mega highways, speed trains, and artificial gardens—it will all be at the cost of our spectacular natural environment and wildlife heritage. Kenya hardly has any natural resources, what we have is wilderness and wildlife. For Kenya to stand apart, she must aspire to safeguard the environment and protect forests and wildlife as a central means of to attaining this sustainable development goal.