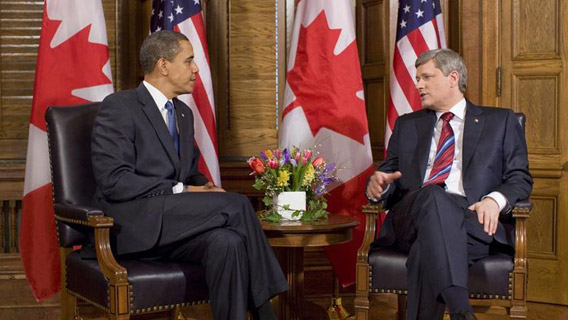 Having sent a delegation to the United Nation’s Rio+20 Summit on Sustainable Development, the World Wide Fund for Nature (WWF), the world’s biggest conservation group, has recently declared their Heroes and Villains of Rio+20—so far. The NGO has strong words for the negotiating position of the U.S. and the major oil exporting countries (OPEC), but saves its harshest criticisms for Canada.

“Canada has blocked progress so far in every realm at Rio +20. […] This is a negotiation, and yet it’s not clear anyone from Canada has any mandate to move in any way on any issue. Canada appears disinterested in measures to safeguard the environment,” WWF writes.

This is not a huge surprise since Canada has recently proven intractable at climate change negotiations, pulled out of the Kyoto Treaty, and slashed environmental protections at home. Critics contend that the Stephen Harper administration has placed the expansion of nation’s tar sands above all other domestic and international issues.

At Rio+20 WWF says Canada is refusing to acknowledge differing responsibilities between industrial and poor countries and blocking any new funding sources.

“Canada appears disinterested in measures to safeguard the environment,” WWF says, adding, “So, why are they here?”

Next in line for Rio+20 villains, WWF points to the major oil exporting countries, or OPEC, for opposing the phasing out of fossil fuel subsidies. The issue has captured twitter today: the hashtag #endfossilfuelsubsidies was the second most “tweeted” issue on the site this morning worldwide.

WWF also has harsh words for the U.S. which it says “has largely played a spoiler role in this process calling for a weak and non-committal outcome.”

In particular, WWF says the U.S. needs to stop blocking progress on ocean governance, such as new protections for the high seas.

Best of the Bunch

The group that receives the most praise at the summit is the “African Group.” According to WWF, these nations “are progressive on forest protection and are calling for Zero Net Deforestation.” In addition, this group of countries have proven key in pushing for an economy that takes nature into account.

They praise the EU for past work on environmental issues, but urge the EU “to be brave on new sources of finance, such as Financial Transaction Taxes (FTTs) and the removal of agricultural and fossil fuel subsidies.”

According to WWF, the host country, Brazil, has the greatest opportunity to push for more ambition at the summit, but to date has not done so.

Brazil has “pushed out a compromise text that compromises our future. Brazil President Dilma Roussef needs to step in immediately and give this process a boost, or 20 years from now, we’ll remember Brazil as the country where the world gathered and failed to secure a sustainable world,” WWF writes.

The conservation group also calls for more leadership from Mexico, India, and China.

WWF: only Brazil can save Rio+20 summit

(06/16/2012) WWF is calling upon Brazil ‘to play politics as well as they play football’ to ensure the Rio+20 summit produces a meaningful outcome.