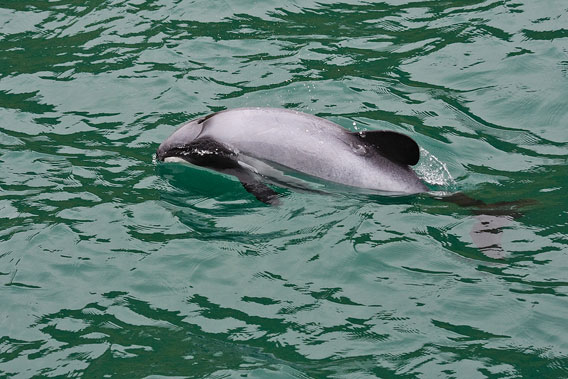 Hector’s dolphin is the parent species of the subspecies Maui’s dolphin. Both are only found in New Zealand. Photo by: Bigstock.

The world’s smallest dolphin is also the closest to extinction. New Zealand government figures show that Maui’s dolphin (Cephalorhynchus hectori maui) are down to just 55 mature individuals, falling from 111 in 2005. The small cetaceans, measuring up to 1.7 meters (5.5 feet), are imperiled due to drowning in gillnets with the most recent death by a fisherman’s net occurring in January.

“These latest population figures show we have to act now, there is no choice. Any delay could lead to more deaths of Maui’s dolphins in fishing nets and tip the species past the point of no return,” Katrina Subedar with New Zealand NGO, Forest and Bird, said in a press release.

The conservation group is calling for immediate safeguards for Maui’s dolphin while the government discusses long-term actions. They say the Primary Industries Minister should use emergency powers to ban gillnets and trawlers in Maui’s dolphins habitat.

With 55 mature Maui’s dolphins left, researchers believe only 20 may be female. Maui’s dolphins are slow breeders: they take around seven years to breed and then only reproduce every few years.

“We can’t change our past to bring back species like the moa that are lost forever, but we must not, and will not, give up on our critically endangered dolphins,” Rebecca Bird, WWF-New Zealand’s Marine Program Manager, recently said. “We know that solutions exist to save Maui’s, it is time the government acted on behalf of all New Zealanders to protect this precious national treasure.”

Maui’s dolphins are a subspecies of Hector’s dolphin (Cephalorhynchus hectori), which is listed as Endangered by the IUCN Red List. Like Maui’s dolphin, the major threat to Hector’s is the use of gillnets. Both are found only in the seas surrounding New Zealand.

A petition on the issue has been started on Avaaz: Save the Maui’s Dolphin.

(02/27/2012) Scientists have captured what is believed to be the world’s first footage of the cryptic Shepherd’s beaked whale (Tasmacetus shepherdi), one of a number of beaked whale species about which scientists know almost nothing.

(01/24/2012) Threats to marine mammals usually include climate change, drowning as by-catch, pollution, depletion of prey, but what about eating marine mammals? A new study in Biological Conservation finds that a surprising 87 marine mammals—including polar bears, small whales, and dolphins—have been eaten as food since 1990 in at least 114 countries.