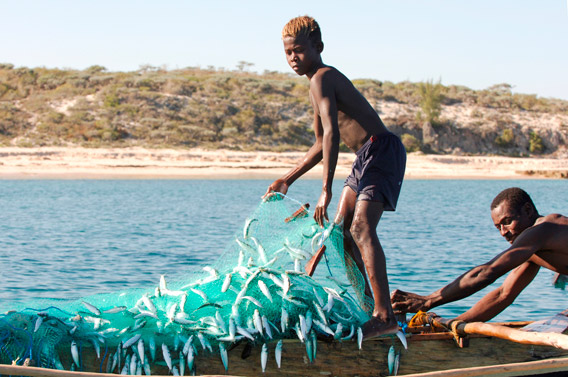 With the government of Madagascar planning to increase marine protected areas by one million hectares, a group of researchers have laid out flexible recommendations in a new study in the open access journal PLoS ONE. The researchers employed four different analyses in order to highlight a number of different conservation options, however the different analyses pointed to the need to protect certain areas with high biodiversity, including the Barren Islands’ reefs, the reefs of Juan de Nova, the Banc de Leven, and the shallow banks of the Cap Sainte Marie.

“Creation of protected areas is a key conservation strategy to safeguarding marine resources, but one size doesn’t fit all. This study demonstrates the need for a comprehensive portfolio of management solutions from community based coastal fisheries to fully protected marine parks,” Caleb McClennen, co-author and Wildlife Conservation Society (WCS) Director for Marine Programs, said in a press release.

Currently, marine conservation is poor in Madagascar. The study notes that less than 1 percent of the nation’s coral reefs are in no-take zones and there is only one marine protected area, Sahamalaza-Isles Radama. Among the most important marine sites the Barren Islands has already received some conservation attention, but other sites have so far been neglected by conservation efforts.

Many Malagasy (inhabitants of Madagascar) depend on marine resources for livelihood and protein, but the waters are still plied by foreign fisheries. In addition, Madagascar is among the world’s poorest countries with around 70 percent of the population suffering from malnutrition and two-thirds living below the international poverty line (making less than $1.25 a day). The nation has also seen massive population growth, with officials estimating that during the 20th Century the population rose from 2.2 million to nearly 12 million. Today, over half the population is under 20. This combination of poverty, population growth, and foreign fishing fleets are putting massive pressure on the nations’ fisheries. A recent study in Marine Policy found that fish-catches in Madagascar were twice as high as reported, with around half being taken for consumption abroad.

“Signs of decline have already been observed in several stocks, suggesting that current levels of catches are likely to be exceeding sustainable yields. This has profound implications for the economic and ecological sustainability of fisheries, as well as food security in a country where people rely heavily on the ocean for their daily protein needs and livelihoods,” reads the Marine Policy study.

Establishing marine protected areas and other management schemes would be one of the best tools to ensure local fisheries do not collapse.

“It behooves countries, in the face of impending fisheries and climate crises, to plan and implement intelligent management that will increase the resilience of
their natural marine resources,” said co-author Tim McClanahan, also with WCS, “This paper will provide a roadmap for Madagascar to plan and manage these resources and the methods should prove affordable and useful for the poorest countries where adaptation to climate change will make marine spatial planning a critical part of a successful response.”

(10/11/2011) A new study warns that overfishing could exacerbate poverty and political stability in one of the world’s poorest nations: Madagascar. According to the recent study by the University of British Columbia’s Sea Around Us Project and Malagasy NGO Blue Ventures, fish catches in the African island-nation from 1950 to 2008 are actually double the official numbers, with foreign wealthy nations currently taking half the haul.