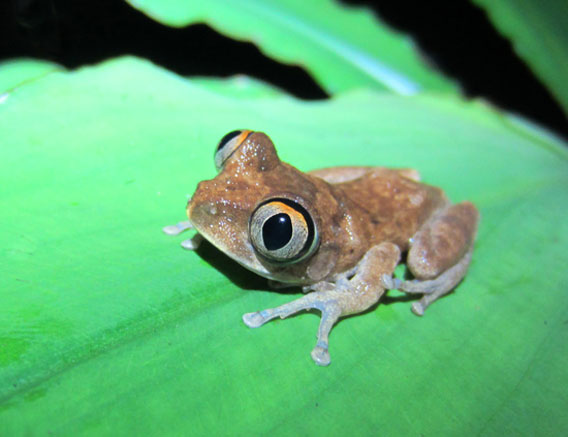 One of Ghana’s 78 recorded frogs: Leptopeles spiritusnoctis. Photo by: SAVE THE FROGS!.

Frogs need all the help they can get. With the IUCN Red List estimating that 41 percent of amphibians are endangered, frogs are currently the world’s most imperiled animal family. Scientists estimate that around 200 amphibian species have been lost to extinction in recent decades to habitat loss, pollution, and a devastating fungal disease. Yet as the frog emergency worsens, there have been positive movements in conservation. The most recent comes from the small West African country of Ghana. Partnering with the enthusiastic US-based organization, SAVE THE FROGS!, two Ghanaian herpetologists, Gilbert Baase Adum and Caleb Ofori, have started a sister branch in their country: SAVE THE FROGS! Ghana. This is West Africa’s first conservation group devoted exclusively to amphibians.

“Born to a hunting tribe in northern Ghana, my first and immediate interest in frogs was for their ‘meat’. I feel ashamed to always confess it. It was not until my secondary school days when I repented of eating frog meat and then at university I developed another interest, this time to save them,” Executive Director of SAVE THE FROGS! Ghana, Gilbert Baase Adum told mongabay.com.

Adum’s says Ghana’s 78 known species of frog are facing a number of impacts, including logging, mining, overconsumption, roads, herbicides, and a general lack of awareness among the people and policy makers.

The new group’s first task is turn the Atewa Hills region into a national park. This area is home to a rich biodiversity, including the last known population of the Togo slippery frog (Conraua derooi). Given its rarity and unique heritage—it’s related to the world’s biggest frog—the species has been listed as number 29 on EDGE’s top 100 most endangered and evolutionary distinct amphibians.

“Despite the unique ecosystems with the exceptional species richness and high levels of endemism, the reserve is under constant threat from mining interests and illegal logging, and is not managed as a wildlife reserve. Locals also exploit the Togo slippery frog for food consumption. Therefore, preserving the reserve as a national park would afford it the fullest protection deserved, and would prevent its becoming another mountaintop removal site that once harbored abundant wildlife, as has unfortunately been the case elsewhere in West Africa,” Adum explains.

Founder of SAVE THE FROGS, Kerry Kriger, said of the recent partnership with Ghana: “There are few countries in the world whose people and wildlife are so desperately in need of assistance as Ghana […] I’ve been amazed at the positive reception we’ve received from the Ghanaian people. They’re poised to help; the difference between success and failure in saving Ghana’s frogs will come down to how much support the outside world provides.”

In an November 2011 interview Gibler Baase Adum discusses the rich biodiversity of Ghana, including its wonderful frogs; the fight to save Attewa Hills; and the benefits of joining up with SAVE THE FROGS! 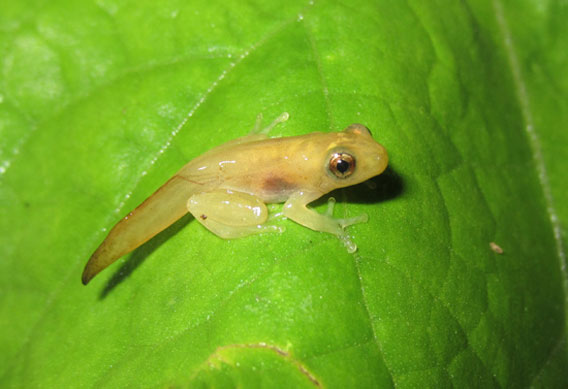 A specimen of Hyperolius concolor in Ghana. Photo by: SAVE THE FROGS!.

Gilbert Baase Adum: I am both an ecologist and a conservation researcher, mostly interested in understanding threats to wildlife fauna and finding appropriate ways to halting these threats. I had my first and second degrees in fields related to amphibians at the Kwame Nkrumah University of Science and Technology’s Department of Wildlife in Kumasi, Ghana. I have also taken other relevant training courses at Humboldt University in Germany, the University of Nottingham in the United Kingdom and through Cambridge University’s Tropical Biology Association program in Tanzania.

Gilbert Baase Adum: Born to a hunting tribe in northern Ghana, my first and immediate interest in frogs was for their “meat”. I feel ashamed to always confess it. It was not until my secondary school days when I repented of eating frog meat and then at university I developed another interest, this time to save them. What moved me then and now is the unprecedented declining in frogs’ populations around the world including my own home region where their status now can only be a shadow of their former abundance.

Mongabay: What threats are frogs facing in Ghana?

2. Many people in northern Ghana eat frogs and use frogs as fishing bait.

3. Ditches and potholes created by logging roads are ecological traps, where amphibians are attracted to spawn but then the eggs are destroyed by vehicles.

4. Lack of interest in frog research by ecologists and general ignorance about frog conservation issues by the public and government.

5. The use of toxic agrochemicals including Atrazine in important frog agro-forests like cocoa farms.

Mongabay: What frogs would you say are notable in Ghana?

Gilbert Baase Adum: There are at least 78 known frogs in Ghana, each of these being special in its own way! Two are the Endangered giant west African squeaker (Arthroleptis krokosua) and the Critically Endangered Togo slippery frog (Conraua derooi). The former is evolutionarily distinct from any other West African frog, and only 12 individuals are known to exist. The latter is the closest relative of the world’s largest frog, the Goliath giant frog (Conraua goliath), and is found in only two streams, both in Ghana’s Atewa Hills.

Mongabay: What will be some of your first actions to help frogs in Ghana?

Gilbert Baase Adum: Creating the Atewa Hills National Park, which would be Ghana’s 6th national park. Getting biology students and other scientists interested in frog research and conservation by enhancing their capacities in the taxonomy, ecology and importance of frogs. While we are making small grants available to students we will also help university lecturers to supervise their works. For the general public we have already started to embark on campaigns aimed at raising awareness of people including locals of all ages—at churches and schools and through radio broadcasts. We are planning to implement alternative livelihood activities such as beekeeping and mushroom farming in communities that currently eat frogs or destroy their habitats.

Mongabay: Will you tell us about the Atewa Hills? Why should this region be preserved?

Gilbert Baase Adum: The Atewa Hills is located in south-eastern Ghana (6°12’24.7’’N, 0°34’37.2’’W) within the West Upper Guinean Forest Zone. It is one of only two reserves in Ghana with Upland Evergreen forests and undoubtedly it is Ghana’s most biodiverse wilderness area. It supports exceptional numbers of endemic and rare animal and flora fauna including black star plant species and 700+ butterfly species, several of which are endemic (e.g. Neaveia lamborni and Sapium aubrevillei). Atewa Hills is also the final remaining home of the critically endangered Togo slippery frog (Conraua derooi), which lives on two streams in the Atewa Hills and nowhere else. Despite the unique ecosystems with the exceptional species richness and high levels of endemism, the reserve is under constant threat from mining interests and illegal logging, and is not managed as a wildlife reserve. Locals also exploit the Togo slippery frog for food consumption. Therefore, preserving the reserve as a national park would afford it the fullest protection deserved, and would prevent its becoming another mountaintop removal site that once harbored abundant wildlife, as has unfortunately been the case elsewhere in West Africa.

Mongabay: What stands in the way of turning Atewa Hills into a national park?

Gilbert Baase Adum: Many influential companies and individuals profit off of the continued exploitation of the Atewa Hills and are working diligently to thwart any efforts of turning it into a national park. It appears to be difficult for the government itself to decide between whether to have it as a protected area or mining for its minerals. Our goal at SAVE THE FROGS! Ghana is to educate the surrounding villages about the importance of the Atewa Hills to their livelihoods; to build nationwide and international movements to protect the Atewa Hills, and to educate our country’s politicians and other decision-makers about the value in permanently protecting the reserve as the Atewa Hills National Park.

Mongabay: How will partnering with SAVE THE FROGS in the US help your new organization take off? 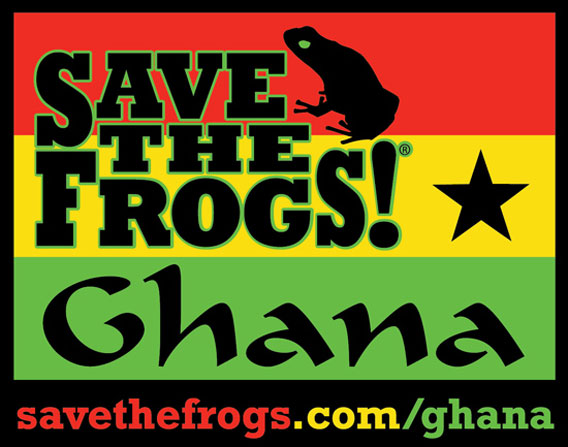 (09/27/2011) Scientists with Cornell have discovered genetics that may provide immunity to frogs in face of the killer amphibian-disease chytridiomycosis. This plague, which is spreading to amphibian populations worldwide, is responsible for a number of frog species’ recent extinction. But now researchers report in a new study in the Proceedings of the National Academy of Sciences (PNAS) that they are one step closer to understanding why some frog populations are able to fend off the disease, while others succumb with lightning-speed. In time, the results may lead to breeding strategies in captivity that could produce immune populations.