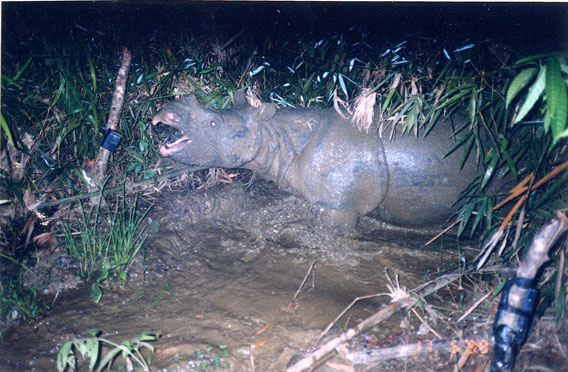 Camera trap catches one of the world’s last Vietnamese rhinos before its extinction. Photo courtesy of WWF.

In 2009 poachers shot and killed the world’s last Vietnamese rhinoceros (Rhinoceros sondaicus annamiticus), a subspecies of the Javan rhino, confirms a report from International Rhino Foundation (IRF) and the World Wide Fund for Nature (WWF). The Vietnamese rhino was the last Javan rhino to survive on the Asian mainland and the second subspecies to vanish, following the extinction of the Indian Javan rhino (rhinoceros sondaicus inermis). The Javan rhino is the world’s most imperiled rhino species with now only around 50 individuals surviving in a single park on its namesake island in Indonesia.

“The last Javan rhino in Vietnam has gone,” Tran Thi Minh Hien, WWF-Vietnam Country Director, said in a press release. “It is painful that despite significant investment in the Vietnamese rhino population conservation efforts failed to save this unique animal. Vietnam has lost part of its natural heritage.”

From 2009-2010 Researchers collected 22 dung samples from Cat Tien National Park, the subspecies’ final stand, only to find that they all belonged to the single rhino found dead due to poaching last year, essentially closing-the-book on the Vietnamese rhino for good.

“Given the good survey coverage of the area, the field observations, and the genetic and bacterial diversity work, we can therefore confirm that the Vietnamese
population and the annamiticus subspecies of Javan rhinoceros is extinct,” the WWF report on the subspecies’ extinction reads.

Once roaming much of Southeast Asia—from Vietnam to the east, Thailand to the west, and Malaysia to the south—the Vietnamese rhino was initially thought extinct after the Vietnam war due to the proliferation of guns, but a single population of the Vietnamese was rediscovered in 1988, only to last another 23 years.

“The extinction of the Javan rhinoceros in Vietnam is a major conservation failure. When the subspecies was rediscovered in 1988, the population was estimated at up to 10-15 individuals (although this was probably an over-estimate), and adequate habitat remained,” reads the report, adding that, “had the rhinoceros and its habitat been preserved, it may have been possible to affect a population recovery in the style of the Indian (Rhinoceros unicornis) and African rhinoceros species through an intensive management program.”

The report blames the ultimate demise of the rhino on poachers. Rhinos are illegally killed for their horns, which are ground into traditional medicines used throughout eastern Asia, primarily in China and, more recently, Vietnam.

“This is an unspeakable tragedy and a horrible loss not only for the wildlife community, but for our planet and future generations,” Rhishja Larson, creator of Saving Rhinos and author of the blog, Rhino Horn is NOT Medicine, told mongabay.com. “If illegal wildlife trafficking continues to proliferate at the current rate, then the extinction of the Javan rhino in Vietnam is a tragic glimpse into the future of many endangered species.”

Though numerous scientific studies have shown that there are no medicinal benefits to consuming rhino horn—made mostly out of keratin, it’s the nutritional equivalent of eating one’s fingernails and hair—rhino poaching has hit new heights recently. In South Africa alone, 333 rhinos were killed by poachers last year to feed the black market demand in Asia.

Beyond poaching, the Vietnamese rhino also suffered from large-scale habitat loss, agricultural encroachment, and the inability of Vietnam to protect the last individuals even in one of its most famous parks.

“The [rhino] population was restricted to only 6,500 hectares of [their] habitat due to the presence of a heavily used motorbike dirt-track connecting settlements within the park,” reads one snippet from the report.

Nick Cox, Manager of WWF’s Species Program in the Greater Mekong, says that if further extinctions are to avoided in Vietnam, the nation’s protected areas “need more rangers, better training and monitoring, and more accountability.”

According to the report, bushmeat and traditional medicine are rapidly emptying Vietnam’s remaining forests of its megafauna: “Asian elephant has been reduced to very small and isolated populations in the central and southern parts of Vietnam and are
being persecuted where they remain. The tiger population is estimated at fewer than 30 individuals in Vietnam, a direct result of hunting for wildlife trade. Gaur is reported to be in serious decline in Vietnam and banteng are in a similar situation, having been lost from many sites in which
the species formerly occurred.”

Now that the Vietnamese subspecies is gone, conservation focus must turn solely to the Javan rhino population in Ujung Kulon National Park, where recent camera trap footage has documented mothers with calves, proving the population there is still breeding. There are no Javan rhinos in captivity and experts fear a natural disaster, especially a massive volcanic eruption, could doom the species entirely.

Javan rhinos have a single horn and folds of skin similar to the Indian rhino. The Vietnamese rhino was distinguished from its island-relative by its size: it was much smaller than those roaming Java.

Across Asia and Africa, the same pressures—habitat destruction and poaching—have pushed all five of the world’s rhino species, at one time or another, into endangerment. Three of the five species—the black, the Javan, and the Sumatran—are listed as Critically Endangered.

“There are around 48 of the Indonesian Javan rhinos, perhaps fewer than 250 Sumatran rhinos, and only seven Northern white rhinos left on Earth. Seven! If rhino conservation efforts continue to be undermined by the rhino horn market, then these populations could be knocking on extinction’s door,” Larson explains. Still, Larson says she has seen recent signs of progress.

“Global efforts to address the demand side and debunk medicinal myths about rhino horn are finally on the rise and have increased, especially during the last year. This willingness to take a stand means there is hope for the future of the rhino.” 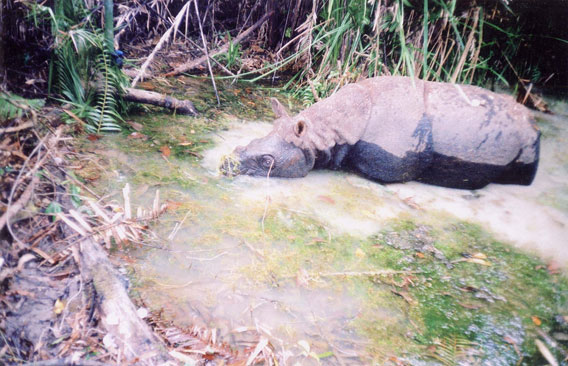 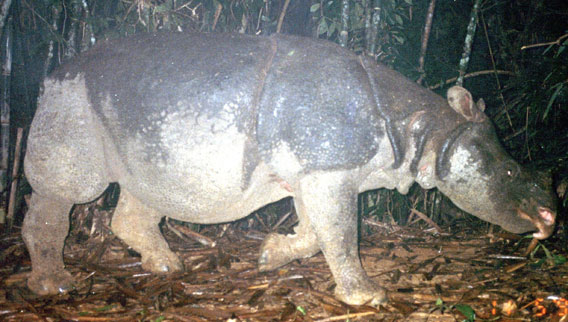 Down to 50, conservationists fight to save Javan Rhino from extinction

(05/17/2011) Earlier this year, the International Rhino Foundation launched Operation Javan Rhino to prevent the extinction of the critically endangered Javan Rhinoceros (Rhinoceros sondaicus), formerly found in rain forests across Southeast Asia. Operation Javan Rhino is a multi-layered project which links field conservation, habitat restoration, and management efforts with the interests of local governments and communities. The following is an interview with Susie Ellis, Executive Director of the International Rhino Foundation.

(07/08/2011) Nearly 200 rhinos have been killed in South Africa through the first six months of 2011, reports TRAFFIC, the wildlife trade monitoring network.

(06/30/2011) A Vietnamese woman ended up in the hospital after consuming rhino horn, reports savingrhinos.org. Used for a rash around her mouth, the rhino horn instead caused a serious allergic reaction, including reddening skin, itching, and fever. Listed under the Convention on International Trade in Endangered Species of Wild Fauna and Flora (CITES), rhino horn is illegal to purchase or sell worldwide.

(04/27/2011) Good news for rhinos is rare recently, but a new census shows that Nepal’s one-horned rhino (Rhinoceros unicornis) population has increased by 23% since 2008 even in the face of poaching. In total 534 rhinos survive in Nepal, a rise of 99 individuals from 3 years ago.

(04/11/2011) Using genetic data and re-assessing physical evidence, scientists write that they have uncovered a new species of rhino, long considered by biologists as merely a subspecies. Researchers write in an open access PLoS ONE paper published last year that evidence has shown the northern white rhino is in fact a distinct species from the more commonly known—and far more common—southern white rhino. If the scientific community accepts the paper’s argument it could impact northern white rhino conservation, as the species would overnight become the world’s most endangered rhino species with likely less than ten surviving.

(02/28/2011) There may only be 40 left in the world, but intimate footage of Javan rhino mothers and calves have been captured by video-camera trap in Ujung Kulon National Park, the last stand of one of the world’s most threatened mammals. Captured by World Wildlife Fund (WWF) and Indonesia’s Park Authority, the videos prove the Javan rhinos are, in fact, breeding. “The videos are great news for Javan rhinos,” said Dr. Eric Dinerstein chief scientist at WWF, adding that “there are no Javan rhinos in captivity—if we lose the population in the wild, we’ve lost them all.”

(01/19/2011) Three hundred and thirty-three rhinos were killed in South Africa last year, the highest number yet. Ten of the rhino were black rhinos, which are listed as Critically Endangered by the IUCN Red List, the rest were white rhinos, listed as Near Threatened. In total South Africa has over 20,000 rhinos.