Commentary by Richard Blaustein on 2 October 2011

Richard Blaustein is a freelance environmental journalist writing primarily on climate change, biodiversity, and genetic resource issues. He has written articles for BioScience, World Watch and Ecosystem Marketplace, and other publications. 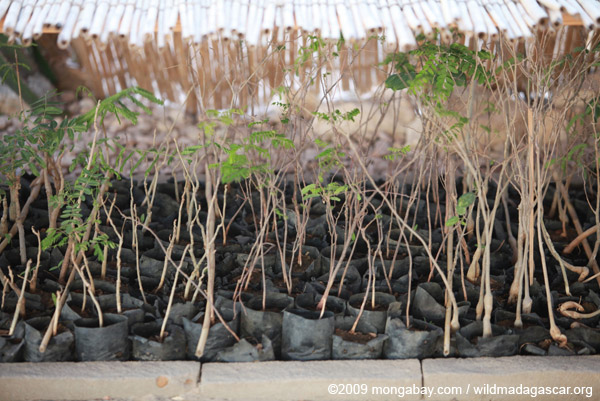 Reforestation project in Madagascar. Photo by: Rhett A. Butler.

President Obama’s sole focus of his September 8th speech to the United States Congress was job creation. He closed his speech by summoning an earlier time of promise: “President Kennedy once said, ‘ Our problems are man-made—therefore they can be solved by man. And man can be as big as he wants.’ These are difficult years for our country. But we are Americans. We are tougher than the times we live in, and we are bigger than our politics have been. So let’s meet the moment. Let’s get to work…” Inspiration is surely needed because in addition to the United States, where unemployment remains at about 9 percent, severe unemployment is found throughout the world, with Greece, Spain, and South Africa, for example, having 2011 summer unemployment rates at over 16, 20, and 25 percent, respectively.

At this time, as we ready for the November 2011 Durban UN Framework Convention on Climate Change (UNFCCC) negotiations, the participants of this season’s discussions should underscore the critical opportunity for large scale public works programs that have carbon sequestration as a prime focus. This climate mitigation synergy with unemployment response is compelling and should rise to the top of the conference’s agenda.

A public works ecosystem restoration agenda would support the surest tool—namely, healthy ecosystems—that sequesters carbon and lessens the impacts of greenhouse gases in the atmosphere. The other great benefit is that healthy ecosystems best deliver the ecosystem services, such as water, fisheries, pollination, and flood protection, on which we depend.

Fortunately, we do have great paradigms for such an initiative. For example, in the United States in the 1930s, the New Deal’s Civilian Conservation Corps (CCC) employed millions during the Great Depression in conservation and ecological restoration projects. Another successful public works initiative during these years was the U.S. government’s many-agency response to the Dustbowl, which successfully focused on the soil erosion and other factors that rendered millions of agricultural hectares unproductive. Indeed, throughout the world, employment programs have been initiated following natural disasters and economic crises.

For the developing world, the upcoming UNFCCC negotiations should call on the world’s public financial institutions to immediately support and fund ecosystem restoration projects that immediately put people to work. Poor nations in all the continents and ocean regions have compelling ecological restoration needs and large numbers of people ready to work.

In the developed world, governments, and—in the absence of willing governments—universities (which have endowments in the billions of dollars) and philanthropists should be encouraged by a UNFCCC decision to fund one to two year programs that will provide transitional employment. In the United States for example, many of America’s billionaires have signed a public pledge to dedicate a half of their wealth to philanthropic causes. Their capital investment, perhaps combined with that of university or other sources, in ecosystem restoration at this time would have a lasting legacy, while providing thousands with transitional employment.

The actual public works could include: forest restoration and rejuvenation, for example, in the tropical deforested area or with the proven successful longleaf pine reforesting in northern Florida; invasive species removal, perhaps replicating South Africa’s successful Working for Water program; range, pasture, and agricultural land revitalization; wetlands, mangroves, and sea grass recovery; mine clean-up ; and even collecting biomass waste, such as from grass clippings or trees killed by pest infestation, and converting it to the carbon-mitigating, soil amendment, biochar.

These efforts would make lands, watersheds and coasts more productive, while also bolstering nations’ response to climate change. For example, range and pasture lands become more productive for forage and feeding when their soil becomes carbon-enriched. In the United States it is estimated that 90 percent of private rangelands have carbon-deficient soils. Range and pasture land degradation is similarly common throughout the world. These lands sequester carbon and become more productive by increasing plant cover and introducing legumes. It is labor intensive work that could be done under the auspices of public works projects. The prescient landowner in any nation who would allow this restorative and free work on his or her land should also be encouraged by a UNFCCC signal of their receiving credits within the further development of carbon markets.

At Durban, the UNFCCC should summon the proven success of land-focused public works programs and demonstrate that climate activism and economic redress are akin, based on caring about people in the short- as well as long –term. All that’s needed is will and a little creativity to help meet the national and natural challenges we collectively face.

(09/29/2011) Investors funneled $178 million into forest carbon projects intended to mitigate global climate change last year, according to a new report by Forest Trends’ Ecosystem Marketplace. By trading a record 30.1 million tons of carbon dioxide equivalent (MtC02e), the market saw a 48 percent rise over 2009—including a rise in private investors over non-profits as well as greater support for the global program Reduced Emissions from Deforestation and forest Degradation (REDD)—shows that the burgeoning market may be beginning to make good on its promise to provide funds to save forests for their ecosystem services with an initial focus on carbon.

(09/21/2011) When most of Asia is cutting down its forests, China stands apart. In the last two decade the massive country has gained over 30 percent forest cover. However, a new opinion piece by Jianchu Xu, with the World Agroforestry Centre and the Kunming Institute of Botany, argues that China’s growing forest is not what it appears to be. The problem, according to Xu, is that the statistics of forest cover include monoculture plantations.