Commentary by Paula Kahumbu on 27 September 2011 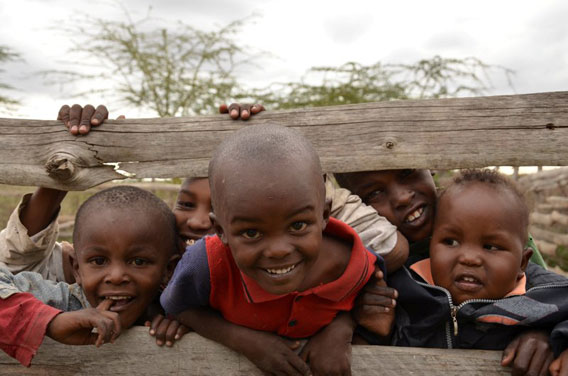 These children’s parents have enlisted in a program where their 100 acres will remain unfenced, no subdivisions no land sales, no retaliatory killings of wildlife in event of predation, in return for $4/acre! It generates the little income that allows these kids to go to school. For now these payments allow the Maasai to retain their pastoral way of life, but in the medium and long term it will not compete with value of the land for development, quarrying or many other land uses. Photo by: Paula Kahumbu.

Hundreds of thousands of Kenyans are supporting government efforts to enact progressive new policies through its Vision 2030 initiative as it promises to lift us out of a depressed economy and to take us onto a path to becoming a prosperous developed nation. For this to occur, development must be sustainable —but for now what the people want and need most is for the basic necessities for life to be assured like adequate water, sanitation, energy, health, education, homes, and jobs. It is unfortunate that some of our leaders are mistaken in believing that this means Kenya should look like USA or Europe with concrete cities and mega highways, speed trains, and artificial gardens—it will all be at the cost of our spectacular natural environment and wildlife heritage. Kenya hardly has any natural resources, what we have is wilderness and wildlife. For Kenya to stand apart, she must aspire to safeguard the environment and protect forests and wildlife as a central means of to attaining this sustainable development goal.

Under Kenya’s new Constitution, the passage into law of any new legislation is subject to several Acts of Parliament. The worry is that, in the rush to pass new legislation, the consultative process leading up to the drafting of new policy may also be rushed. The quality of Bills may be compromised as a result. Where this is allowed to happen, an historic opportunity might go a-begging.

The review of Kenya’s Wildlife Bill, under way at present, is a case in point. The review will culminate in the formulation, of a new Wildlife Policy and Act for the country. The Ministry for Wildlife wants the new policy and bill to be passed in Parliament within weeks. In the rush to meet this deadline, the Ministry is running the risk of presenting and pushing through a bill that is deeply flawed and potentially disastrous for Kenya’s unique wildlife heritage.

This would be a disservice, not only to those hundreds of thousands of Kenyans who—through tourism and other wildlife-reliant activities – have a direct stake in wildlife conservation policy, but also to the nation as a whole, and of course the animals who have no voice.

Like the government, all Kenyans with an interest in conservation can see that existing wildlife policy does not work and needs to be radically overhauled. So they welcome the opportunity to review it. They see the ongoing wildlife legislation review as a chance for Kenya to enact the most progressive and enlightened wildlife legislation in Africa—and in the world.

Yes, Kenya could be the proud flag-bearer of a radical new approach whereby conservation, far from being treated as if somehow competing with development or agriculture, is instead embraced as an integral driver of mainstream national development and economic well-being.

Kenya’s Minister for Wildlife, Dr Noah Wekesa, has it in his power to make this happen. He can hold out for a comprehensive Wildlife Policy Bill that will serve the interests and concerns of all Kenyans. Or he can rush through a half-baked piece of legislation that could have dire consequences for the nation as a whole.

Let’s get it right 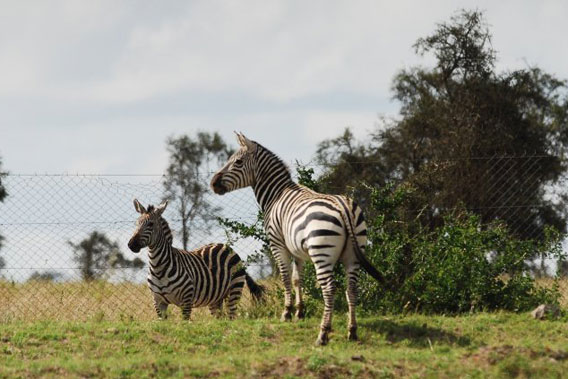 Two zebras separated by a fence. Photo by: Paula Kahumbu.

Far too many of the assumptions made in the draft of the proposed new bill, as this now stands, are antiquated. Conservation is still presented, for example, as something that is controlled by Kenya Wildlife Service (KWS) who have clear mandate primarily in national parks and reserves. The fact that most of the country’s wildlife occurs outside these protected areas on land that falls under the stewardship of communities and private landowners is not adequately taken into account. The role of conservation in nurturing economic growth and prosperity is, likewise, not taken into account.

Perhaps the biggest failing of the draft proposals is the conspicuous absence of tangible incentives to encourage land owners to protect wildlife on their land or to preserve wild habitats through setting up registered conservancies. Again, this is indicative of a failure to recognize the key role privately and community owned conservation areas now play—as buffer zones to the parks and reserves, as safe corridors for wildlife movements, even as core breeding grounds for wildlife populations.

Instead, the emphasis in the draft proposals is on compensating people for losses they might suffer due to wild animals. The losses contemplated include damage to crops or to property, the killing of livestock and human injury or loss of life. The intention with respect to crop and livestock losses is to compensate the owners at the full market rate. Where, though, is the money going to come from? Even under the existing system (where compensation is offered only in cases of human injury or death), and at one seventh the rate now proposed, the government has been unable to find funds enough to pay the victims of human–wildlife conflict, or their families.

In seeking to garner community support through the promise of a compensation scheme that, however well-intentioned, cannot possibly be delivered, and which in any case is open to considerable abuse, our policy makers, surely, are barking up the wrong tree. Worse still, they are engineering a ‘no-win’ situation that will result only in the wholesale massacre of wildlife. People who suffer losses, yet who fail to receive the promised compensation, will find it easier simply to kill the problem animals. The inevitable failure of such a policy will unfairly pit entire communities against the KWS. A compensation scheme is not an incentive for people to protect and live with wildlife.

Let us be fair to the KWS. The organization has an illustrious record; it is justly regarded as one of Africa’s foremost wildlife management authorities. Kenyans from all walks of life are genuinely proud of its distinguished role in upholding Kenya’s long-standing reputation as a global leader in the wildlife conservation field. It has its critics too; but then, just look at the scale of its mandate.

It is wholly unrealistic to expect a single wildlife authority to be able to operate effectively at all times and in all places, over the length and breadth of the entire country. So the KWS has chosen, unsurprisingly, to concentrate on the national parks and reserves. Even these areas, while covering just a small percentage of Kenya’s wildlife landscapes, are a handful. Only a few of the better known parks and reserves generate income; the rest are a cost to the organization. The result, inevitably, is that the KWS simply does not have the financial means to operate as well in conservation areas outside the Parks and Reserves.

Conservation-minded communities and private land owners, meanwhile, have—in setting up wildlife conservancies—taken matters into their own hands and they are even making money out of conservation! Yet the proliferation around the country of privately managed conservation areas has not, so far, been factored into any integrated national conservation strategy. The draft proposals for Kenya’s new Wildlife Policy and Bill conspicuously fail to address this issue except with regards to taxing such enterprises.

Instead of providing a road map for a new and mutually empowering partnership between the KWS and the various conservation operations of community groups and private land owners, the accent in the draft proposals is on further burdening the already stretched government authority with added responsibilities. This will lead inevitably to a further weakening of KWS authority.

By the same token, failure to empower the communities and private land owners, through providing them with conservation incentives, responsibilities and guarantees, threatens to undermine conservation gains made in parts of the country outside the Protected Areas—where most of Kenya’s wildlife is to be found.

We risk getting it wrong with this new wildlife legislation if we fail to capitalize on the goodwill and the expertise of all those genuine Kenyan stakeholders who have made their views known—and who will settle for nothing less than a model Wildlife Bill.

Mugo Kibati, as the champion of the Government’s Vision 2030 initiative, may be the answer we need. He could turn the tables by taking a stand towards re-branding Kenya not as another developing country with industrial ambitions, but a country that recognizes that embraces wildlife conservation as part of development—after all, it is our most valuable natural resource. Kenya should take her place as the global model of successful economic development that makes environmental protection and conservation a key pillar of a new and more prosperous country.

The economic well-being of the country depends ultimately, not on the bricks and mortar of runaway development activity, but on the natural environment that—alone—will define the limits of what we can, or cannot, do. Only by embracing conservation can we create a sustainable basis for our continued economic and social development.

WARNING: SOME PHOTOS BELOW ARE GRAPHIC 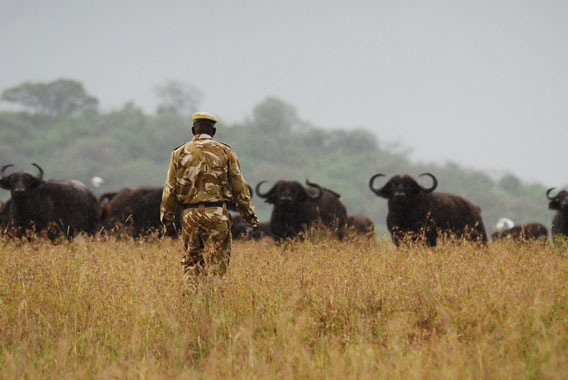 Paramilitary approach of the KWS has served Kenya well under an era of ivory and rhino poaching, but it is not going to save Kenya’s rich wildlife heritage. Photo by: Paula Kahumbu. 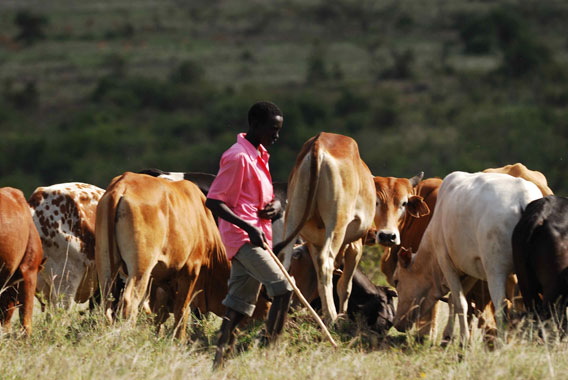 Pastoralism is a way of life that can co-exist with wildlife. Photo by: Paula Kahumbu. 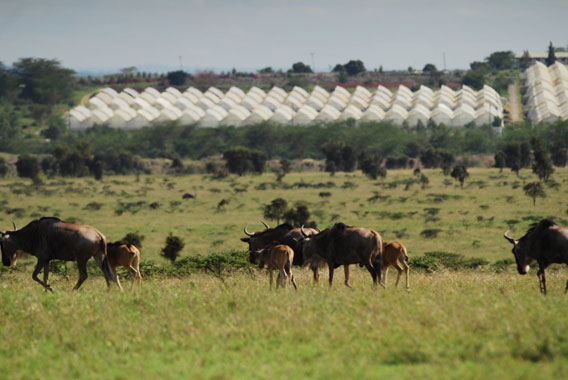 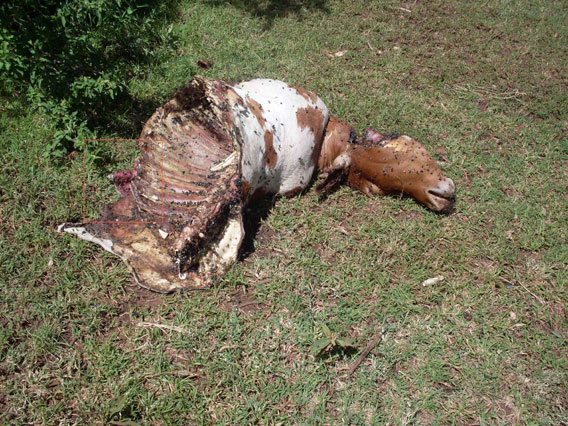 Cow preyed on by lions and then poisoned to kill lions in revenge. Photo by: Paula Kahumbu. 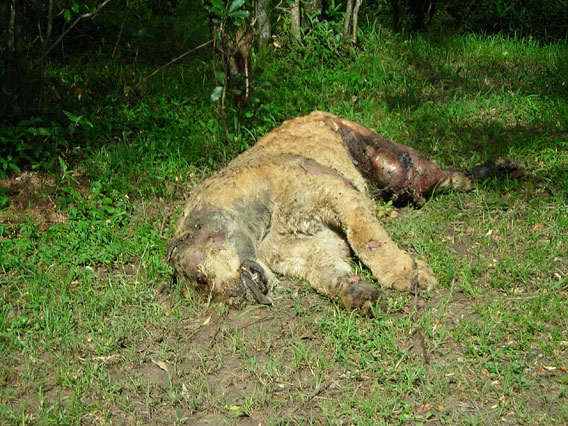 One of five lions poisoned because of conflict with pastoralists. KWS warned in 2009 that Kenya’s lions could be gone in 20 years if urgent action isn’t taken. Photo by: Paula Kahumbu.

(07/21/2011) Yesterday the president of Kenya, Mwai Kibaki, sent a fiery signal to illegal wildlife traffickers worldwide. Kibaki lit up five tons of elephant ivory, worth $16 million on the black market, to show the continent’s resolve to undercut illegal poaching. This was the second time Kenya has set fire to millions of dollars worth of ivory.

(03/23/2011) PUMA, the sporting goods brand, and its parent company PPR will offset their 2010 carbon dioxide emissions by purchasing carbon credits generated through conservation of wildlife habitat in Kenya.

(01/19/2011) It’s a common image of the African savanna: vultures flocking to a carcass on the great plains. However, a new study has found that vulture populations are plummeting in Kenya’s Masai Mara National Reserve, a part of the Serengeti plains, due to habitat loss as well as the illegal killing of lions. Increasingly farmers and livestock owners have targeted lions and other big predators by poisoning livestock carcasses with toxic pesticides, such as Furadan. Not only illegal, such poisonings take their toll on other Serengeti wildlife, including vultures that perish after feeding on the laced carcasses.