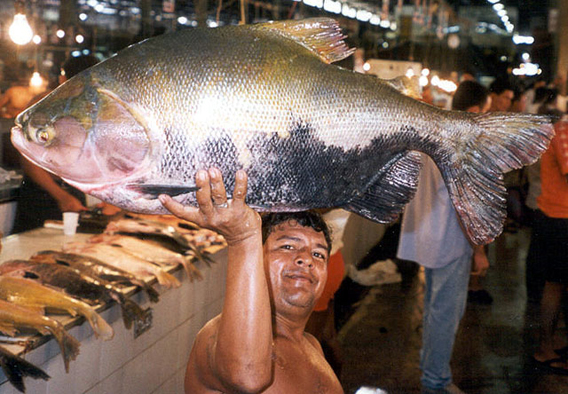 A fruit in the flooded Amazon falls from a tree and plops in the water. Before it can even sink to the floor, a 60-pound monster fish with a voracious appetite gobbles it. Nearly a week later—and miles away—the fish expels its waste, including seeds from the fruit eaten long ago and far away. One fortunate seed floats to a particularly suitable spot and germinates. Many years later the new fruit tree is thriving, while the same monster-fish returns from time-to-time, waiting for another meal to drop from the sky. This process is known as seed-dispersal, and while researchers have studied the seed-dispersal capacity of such species as birds, bats, monkeys, and rodents, one type of animal is often overlooked: fish. Jill T. Anderson, a post-doctoral associate at Duke University, however is one of a few researchers who have begun to connect the dots between massive fruit-eating Amazonian fish, such as the weighty tambaqui (Colossoma macropomum), and the diversity and health of the Amazon rainforest. Unfortunately just as researchers are uncovering the importance of these fish, the fish themselves are vanishing in many parts of the Amazon due to unregulated and overfishing.

The seed dispersal activities of many animals is essential for the Amazon and other forests, because, as Anderson explains: “plants rely on the seed dispersal activities of these animals (i.e. birds, bats, monkeys, tapirs, rodents, and fish) to move seeds away from the mother tree to good sites for germination […] For pioneer species like Cecropia (a genus of tree that we studied), seeds might need light gaps to germinate—that is, seeds might have very specific requirements for germination.”

In a 2009 study Anderson and her colleagues studied two species of frugivorous fish—the tambaqui and the pirapitinga (both known as pacus)—in Peru. Picking through over a million seeds, they documented 44 species of seeds, including 36 from trees and lianas, from the guts of 195 individual fish.

“But,” she says, “it is likely that [tambaqui] disperse seeds of many more species in different locations. For example, Michael Goulding [from the] Wildlife Conservation Society has done beautiful work, documenting a diverse array of species in the diet of Colossoma macropomum (and other fruit-eating fishes) in Brazil.”

A paper published by Anderson and other researchers this year outlines that the tambaqui are truly long-distance dispersers.

“In our study, fish can carry seeds up to 5.5 kilometers, although it is likely that
larger (older) fish can disperse seeds much farther than that,” says Anderson. The older the fish, according to research, the more effective it is at dispersing seeds

“Previous studies of ours, and our colleagues, have shown that younger fish consume fewer fruits and disperse fewer viable seeds,” explains Anderson adding that “in this study, our models indicate that smaller (younger) fish do not disperse seeds as far as larger (older) fish.”

Of course, this finding has implications for conservation, since older fish are vanishing from ecosystems due to overexploitation by locals.

“[Tambaqui] is very commercially important. The population size of this species has decreased by up to 90% in some parts of its range over the past several decades because of overfishing. Fish is the primary source of protein for human populations throughout the Amazon, so it is not surprising that people would overfish a massively large fruit-eater,” Anderson says.

While humans likely have fished for tambaquis and other pacus for millennia, rising populations in the Amazon and increasingly easy access to once impenetrable places have pushed big fruit-eating fish into treacherous territory. Even if these species don’t vanish altogether, a significant drop in the population or a loss of older individuals has the potential of impacting the diversity and abundance of the Amazon rainforest.

Neither the tambaqui, the pirapitinga, nor any of the pacu-like species have yet been evaluated by the IUCN Red List, the main authority behind extinction threats.

Anderson says there is much researchers don’t know yet, such as how do these fish compare to other seed dispersers?

“Honestly we don’t have a good answer at this point. There was a Biotropica paper (see below: 1) from 2002 that showed that fish in Costa Rica were among the best seed dispersers. But, that is the only study that has attempted to compare fish with other dispersers.”

When asked about conservation measures, Anderson points to 1996 study (2) that recommends a larger-catch size to spare juvenile fish from the hook, protection of spawning and migrating areas, and expansions of a fishery statistics database. Though the recommendations were published over a decade ago, Anderson says they “have not been implemented in many locations.”

Anderson adds that, “it is very important to conduct educational programs, respectful of local culture, throughout the Amazon Basin so that people understand that overfishing could ultimately eliminate [tambaqui] from the fisheries.”

Although Anderson has broken new ground on how fish grow forests, she never intended on studying fish when she entered college.

“I became interested in these fascinating fishes in 1999 when I was working as a plant taxonomist on a project in a remote field site in Ecuador. The field site was located next to a river, and I remember the river flooding. When the flood came through our field station, I could see fish swimming everywhere,” Anderson says. “When I read about fruit-eating fishes, I was hooked! (Pun only somewhat intended.)” After that Anderson split time between researching frugivorous fish and plants.

Currently researchers have identified 200 fruit-eating fish in South America. However, there may be even more, since new fish species are consistently uncovered in the Amazon basin. As more research is conducted, scientist may find that the role fish play in dispersing the Amazon’s plants may be very big indeed.

(11/04/2010) According to the first study of its kind in Africa, bushmeat hunting impacts African rainforests by wiping-out large mammals and birds—such as forest elephants, primates, and hornbills—that are critical for dispersing certain tree species. The study, published in Biotropica, found that heavy bushmeat hunting in the Central African Republic changes the structure of forest species by favoring small-seeded trees over large-seeded, leading to lower tree diversity of trees that have big seeds.

How the overlooked peccary engineers the Amazon, an interview with Harald Beck 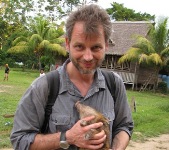 (09/20/2010) When people think of the Amazon rainforest, they likely think of roaring jaguars, jumping monkeys, marching ants, and squeezing anacondas. The humble peccary would hardly be among the first animals to cross their mind, if they even know such pig-like animals exists! Yet new research on the peccary is proving just how vital these species are to the world’s greatest rainforest. As seed dispersers and seed destroyers, engineers of freshwater habitats and forest gaps, peccaries play an immense, long overlooked, role in the rainforest. “Peccaries have the highest density and biomass of any Neotropical mammal species. Obviously these fellows have quite an appetite for almost anything, but primarily they consume fruits and seeds. Their specialized jaws allow them to crush very hard seeds. The cracking sounds can be heard through the thick vegetation long before we could see them. As peccary herds bulldoze through the leaf litter in search for insects, frogs, seeds, and fruits, they destroy (i.e. snap and trample) many seedlings and saplings, sometimes leaving only the bare ground behind,” Harald Beck, assistant professor at Towson University in Maryland, told mongabay.com in an interview.

Long-distance seed dispersal and hunting, an interview with Kimberly Holbrook


(05/24/2010) Scientists are just beginning to uncover the complex relationship between healthy biodiverse tropical forests and seed dispersers—species that spread seeds from a parent tree to other parts of the forest including birds, rodents, primates, and even elephants. By its very nature this relationship consists of an incredibly high number of variables: how abundant are seed dispersers, which animals spread seeds the furthest, what species spread which seeds, how are human impacts like hunting and deforestation impacting successful dispersal, as well as many others. Dr. Kimberly Holbrook has begun to answer some of these questions.

How hornbills keep Asian rainforests healthy and diverse, an interview with Shumpei Kitamura

(04/26/2010) Hornbills are one of Asia’s most attractive birds. Large, colorful, and easier to spot than most other birds, hornbills have become iconic animals in the tropical forests of Asia. Yet, most people probably don’t realize just how important hornbills are to the tropical forests they inhabit: as fruit-eaters, hornbills play a key role in dispersing the seeds of tropical trees, thereby keeping forests healthy and diverse. Yet, according to tropical ecologist and hornbill-expert Shumpei Kitamura, these beautiful forest engineers are threatened by everything from forest loss to hunting to the pet trade.

Seed dispersal in the face of climate change, an interview with Arndt Hampe

(04/05/2010) Without seed dispersal plants could not survive. Seed dispersal, i.e. birds spreading seeds or wind carrying seeds, means the mechanism by which a seed is moved from its parent tree to a new area; if fortunate the seed will sprout in its new resting place, produce a plant which will eventually seed, and the process will begin anew. But in the face of vast human changes—including deforestation, urbanization, agriculture, and pasture lands, as well as the rising specter of climate change, researchers wonder how plants will survive, let alone thrive, in the future?

Why seed dispersers matter, an interview with Pierre-Michel Forget, chair of the FSD International Symposium

(03/07/2010) There are few areas of research in tropical biology more exciting and more important than seed dispersal. Seed dispersal—the process by which seeds are spread from parent trees to new sprouting ground—underpins the ecology of forests worldwide. In temperate forests, seeds are often spread by wind and water, though sometimes by animals such as squirrels and birds. But in the tropics the emphasis is far heavier on the latter, as Dr. Pierre-Michel Forget explains to mongabay.com. “[In rainforests] a majority of plants, trees, lianas, epiphytes, and herbs, are dispersed by fruit-eating animals. […] As seed size varies from tiny seeds less than one millimetres to several centimetres in length or diameter, then, a variety of animals is required to disperse such a continuum and variety of seed size, the smaller being transported by ants and dung beetles, the larger swallowed by cassowary, tapir and elephant, for instance.”