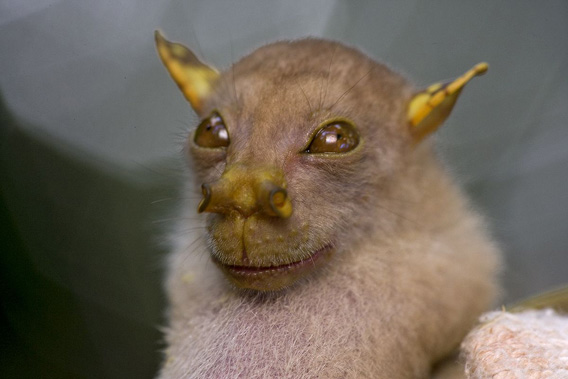 This fruit bat has been seen prior to this expedition, but remains undescribed. Although scientists have yet to name the species, the popular media has already dubbed it the ‘Yoda bat’ given its resemblance to the Jedi master character from the Star Wars series. Fruit bats are vital to rainforests as they disperse seeds. Photo © Piotr Naskrecki/iLCP.

A 2009 expedition to Papua New Guinea proves once again that the island-nation is as diverse in life as it is in human cultures. It took researchers with Conservation International (CI) and the local Institute for Biological Research (IBR) just two months to uncover a startling 200 new species: averaging more than 3 a day in the remote Nakanai Mountains and Muller Range rising from the island of New Britain, a part of Papua New Guinea. Half of the new species were spiders, but the team also found two new mammals, nine new plants, two dozen frogs, and multitude of insects. Most surprising was the discovery of at least two species so unique that they are likely to be assigned their own genus.

“There’s no question that the discoveries we made in both surveys are incredibly significant both for the large numbers of new species recorded, and the new genera identified,” said Leeanne Alonso, head of CI’s Rapid Assessment Program (RAP) which sends scientists on brief expeditions into biodiverse areas that have been largely unsearched by researchers. Since its first expedition in 1990, RAP has uncovered over 700 new species.

On this expedition in the Nakanai Mountains experts found a unique high-altitude mouse with a half white, half black tail. With no close relatives to date identified, researchers are creating a new genus for the tiny rodent.

Entomologists also uncovered a variety of new ant species, including an ant sporting remarkable spins on its back. Researchers believe the new ant, of which they only found two individuals, actually lives high in the forest canopy. Like the mouse, the new ant is so different that researchers think it belongs to its own genus: DNA studies on species are underway.

Another notable discovery was a two centimeter long frog from the ceratobatrachid family. The new tiny amphibian was surprising because until now these type of frogs were only known from the Solomon Islands.

Researchers were especially attracted to the Nakanai Mountains and Muller range given that both have been nominated for UNESCO World Heritage status by the federal government’s Department of Environment and Conservation.

“We hope that news of these amazing new species will bolster the nomination of these spectacular environments for World Heritage status,” said expedition team leader Stephen Richards.

Once protected by its remoteness and wild geography, Papua New Guinea’s people and species are facing new threats, as well as new opportunities. Logging and palm oil industries are putting pressure on tribes and the governments to clear forests for income, while big development projects, such as mines, imperil ecosystems. For now, however, Papua New Guinea remains one of the most untouched nations in the eastern hemisphere.

“[These new species] should serve as a cautionary message about how much we still don’t know about Earth’s still hidden secrets and important natural resources, which we can only preserve with coordinated, long-term management,” said Alonso.

Collaborating with CI was A Rocha International (ARI), a Christian-oriented NGO devoted to conservation.

“As Christians, we believe we are called to care for creation and ensure that life on Earth is protected and respected, no matter how seemingly insignificant a particular species might appear to be,” said Sir Ghillean Prance, chair of the A Rocha International Board. “We also believe that we have a responsibility to help the poorest members of society, whose needs very often go hand in hand with natural resources, as it is usually the poorest people who live most closely to nature and depend on it for their daily needs.” 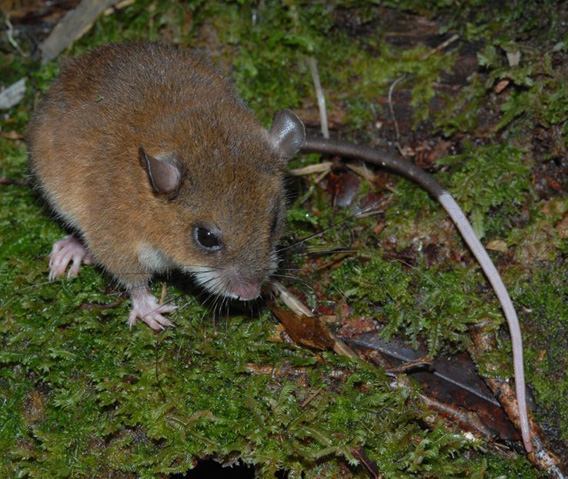 Although this new mouse species resembles the prehensile-tailed tree mice of New Guinea, researchers believe this mountain mouse has no close relatives, representing a new genus. © CI/photo by Stephen Richards . 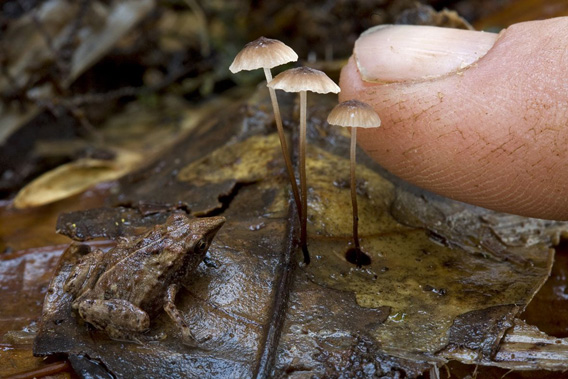 Another new frog found on the expedition. Although this one is unmistakable due to its nose. Incredibly small, this frog was found by following its cricket-like call. Photo © Piotr Naskrecki, Conservation International. 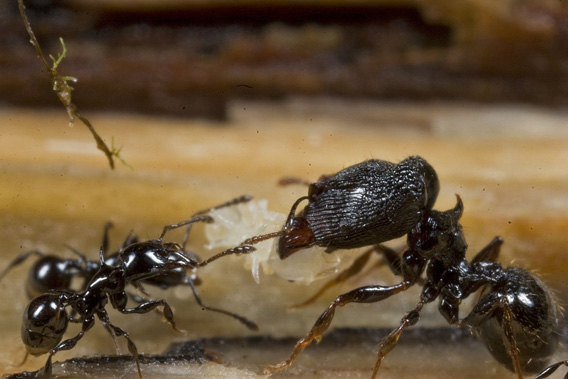 More new ant species: the big ant, known as a ‘major’ meets workers. Workers bring food to the majors who crush it with their giant jaws.
Photo: © Andrea Lucky. 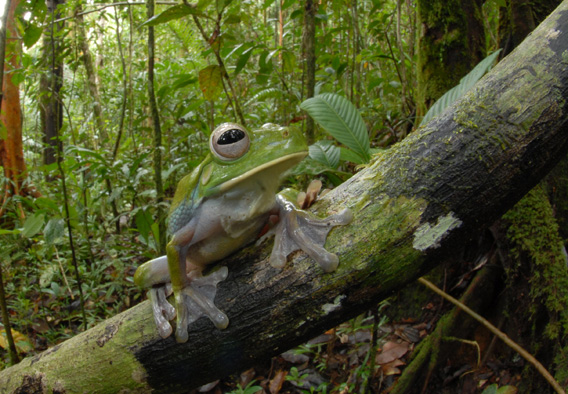 DNA tests will determine whether or not this is a new species of frog, but scientists believe it is likely. Researchers found it living 30 meters up in the trees. © CI/photo by Stephen Richards . 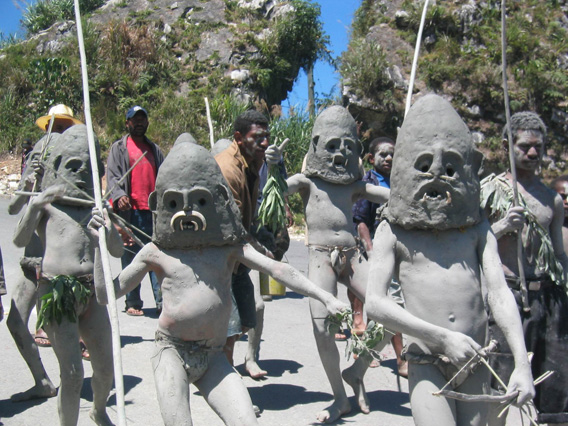 (02/22/2010) Indonesia will target its last frontier — its territory on New Guinea — as it seeks to become a major agricultural exporter, reports the AFP.

(02/01/2010) Nature never runs out of surprises. Exploring Sudest Island off of Papua New Guinea, researchers discovered a new species of frog that drastically changes its appearance from juvenile to adulthood, a transformation that has never been seen in another frog.The new species, named Oreophryne ezra, is shiny black with bright yellow spots. Yet when it matures, the frog becomes rose-colored and even its eyes change from black to blue.

(09/07/2009) A five week expedition into a remote extinct volcano has uncovered a treasure trove of new species in Papua New Guinea, including what may be the world’s largest rat, a fanged frog, and a grunting fish. In all the expedition estimates it may have found around forty species unknown to science. The expedition was undertaken by a BBC film crew and scientists in January. Local trackers led them into the unexplored jungle, hidden beneath the Bosavi volcano’s 2,800 meter summit. Six months prior to arrival, fields of spinach and sweet potato were planted to feed the expedition in such a remote area.

(08/10/2009) Scientists from a variety of organizations have found over 350 new species in the Eastern Himalayas, including a flying frog, the world’s smallest deer, and a gecko which has walked the earth for 100-million-years, according to a new report by the World Wildlife Fund (WWF). The report, entitled Where World’s Collide, warns that these rare biological treasures, as well as numerous other species, are threatened in the Eastern Himalayas by climate change.

(02/03/2009) Ten undescribed species of amphibians — including nine frog and one salamander — have been discovered in the mountains of Colombia, report scientists from Conservation International (CI). The “new” amphibians included spiky-skinned, orange-legged rain frog, three poison dart frogs and three glass frogs, named for their transparent skin. The amphibians were discovered during a recent Rapid Assessment Program (RAP) expedition in the Tacarcuna area of the Darien, near the border with Panama.

(02/03/2009) A dozen previously unknown species of frogs have been discovered in the forests of Western Ghats according to a paper published in latest issue of Zoological Journal of Linnean Society, London. The 12 species have been identified following a revision of the Philautus genus and are the result of ten years of field study in Kerala, Tamil Nadu, Karnataka. Goa, Maharashtra, and part of Gujarat, in the Western Ghats. The Western Ghats are considered a global biodiversity hotspot for their species richness and the threats the mountain range faces.