Amazon rainforest will bear cost of biofuel policies in Brazil

Business-as-usual agricultural expansion to meet biofuel production targets for 2020 will take a heavy toll on Brazil’s Amazon rainforest in coming years, undermining the potential emissions savings of transitioning from fossil fuels to biofuels, warns a new paper published in the Proceedings of the National Academy of Sciences (PNAS). The research suggests that intensification of cattle ranching, combined with efforts to promote high-yielding oil crops like oil palm could lessen forecast greenhouse gas emissions from indirect land use in the region.

Conducting a spatially-explicit analysis of potential land-use change from biofuel feedstock expansion in Brazil, David M. Lapola of the University of Kassel (Germany) and colleagues find that while relatively little forest land will be directly converted for biofuel production, large swathes of rainforest and cerrado will be indirectly impacted through displacement of cattle ranching, presently the dominant form of land use in the Brazilian Amazon.

“To fill the biofuel production targets for 2020, sugarcane would require an additional 57,200 [square kilometers] and soybean an additional 108,100 sq km. Roughly 88% of this expansion (145,700 sq km) would take place in areas previously used as rangeland,” the authors write. “In our simulations, direct deforestation is only caused by soybean biodiesel and amounts to only 1,800 sq km of forest and 2,000 sq km of woody savanna.”

A carbon payback time of four years would be needed to compensate for direct emissions from conversion for cane relative to emissions from fossil fuels. The payback for soy biodiesel would be 35 years, according to the research.

But factoring in indirect land use — cattle ranching displaced to forest lands by cropland expansion — dramatically extends the amount of time needed for emissions savings from biofuel production (relative to fossil fuel use) to compensate for emissions from deforestation: by 40 years for cane ethanol and 211 years for soy biodiesel.

Modeled direct (A) and indirect (B) LUC caused by the fulfillment of Brazil’s biofuel (sugarcane ethanol and soybean biodiesel) production targets for 2020. Image and caption from Lapola et al. 2010.

“Indirect land-use change could considerably compromise the GHG savings from growing biofuels, mainly by pushing rangeland frontier into the Amazon forest and Brazilian Cerrado savanna,” Lapola and colleagues write. “In our simulations, there is an expansion of 121,970 sq km of rangeland into forest areas, and 46,000 sq km into other native habitats, due to the expansion of biofuel croplands.”

“Sugarcane ethanol and soybean biodiesel would be responsible for 41% and 59% of this indirect deforestation, respectively.”

The authors suggest that planting oil palm instead of sugarcane or soy on pasture lands would result in some direct deforestation (300 sq km) but significantly reduce emissions from indirect land-use change due to the crop’s substantially higher oil yield.

“[We] tested different crops that could serve as feedstock to fulfill Brazil’s biodiesel demand and found that oil palm would cause the least land-use changes and associated carbon debt,” they write. “Because of its high oil yield, oil palm would need only 4,200 sq km to fulfill the 2020 demand for biodiesel in Brazil. In comparison, 108,100 sq km would be needed for soybean.” 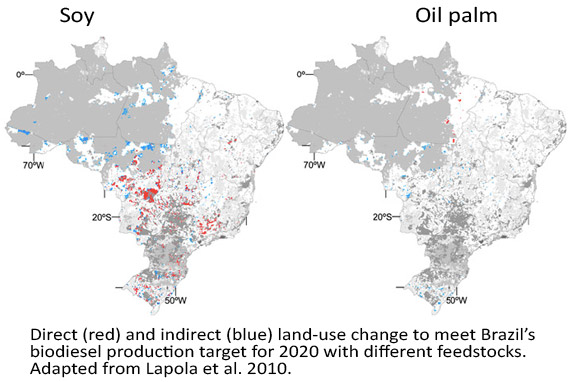 Lapola and colleagues conclude by calling for “an increased interconnection between land-use sectors.”

“We argue that to avoid the undesired indirect land-use change by biofuels presented here, strategies for cooperation between the cattle ranching and biofuel-growing sectors should be implemented by the biofuel sector (based on the sector’s
own interest in minimizing GHG emissions), and institutional links between these two sectors should be strengthened by the government.”

“In other words, biofuel organizations and the government should support initiatives toward modernization of the cattle ranching sector to guarantee that the production of biofuels is not causing ILUC, which would compromise the efficacy (in terms of carbon savings) of their own product. Such a requirement should also be considered as a standard for the production of sustainable biofuels.”

Carbon accounting must not neglect emissions from bioenergy production and use

(10/29/2009) Carbon accounting used in the Kyoto Protocol and other climate legislation currently neglects CO2 emissions from the production of biofuels, a loophole that could drive large-scale destruction of tropical forests and exacerbate global warming, warned researchers writing last week in the journal Science.

(06/25/2009) Vale, the world’s largest miner of iron ore, has signed a $500 million joint venture with Biopalma da Amazonia to produce 160,000 metric tons of palm oil-based biodiesel per year, reports Reuters. Vale says the deal will save $150 million in fuel costs starting in 2014, with palm oil biodiesel replacing up to 20 percent of diesel consumption in the company’s northern operations. The biodiesel will be produced from oil palm plantations in the Amazon state of Pará. The move is likely to stir up criticism from environmentalists that fear palm oil production could soon become a major driver of deforestation in the region.

Will palm oil drive deforestation in the Amazon?

(03/23/2009) Already a significant driver of tropical forest conversion across southeast Asia, oil palm expansion could emerge as threat to the Amazon rainforest due to a proposed change in Brazil’s forest law, new infrastructure, and the influence of foreign companies in the region, according to researchers writing in the open-access journal Tropical Conservation Science. William F. Laurance, a senior scientist at the Smithsonian Tropical Research Institute (STRI) in Panama City, Panama, and Rhett A. Butler, founder of environmental science web site Mongabay.com, warn that oil palm expansion in the Brazilian Amazon is likely to occur at the expense of natural forest as a result of a proposed revision to the forest code which requires land owners to retain 80 percent forest on lands in the Amazon. The new law would allow up to 30 percent of this reserve to consist of oil palm.

(12/03/2008) Producing biofuels from oil palm plantations established on degraded grasslands rather than tropical rainforests and peat lands would result in a net removal of carbon from the atmosphere rather than greenhouse gas emissions, report researchers writing in Conservation Biology. The results confirm that benefits to climate from biofuel production depend greatly on the type of land used for feedstocks.

Biofuels can reduce emissions, but not when grown in place of rainforests

(07/22/2008) Biofuels meant to help alleviate greenhouse gas emissions may be in fact contributing to climate change when grown on converted tropical forest lands, warns a comprehensive study published earlier this month in the journal Environmental Research Letters. Analyzing the carbon debt for biofuel crops grown in ecosystems around the world, Holly Gibbs and colleagues report that “while expansion of biofuels into productive tropical ecosystems will always lead to net carbon emissions for decades to centuries… [expansion] into degraded or already cultivated land will provide almost immediate carbon savings.” The results suggest that under the right conditions, biofuels could be part of the effort to reduce humanity’s carbon footprint.

Next gen biofuels could decimate rainforests

(05/27/2008) Next generation biofuels could decimate tropical forests says a leading ecologist from the University of Minnesota.

(04/03/2008) An industry-led ban on soy production in the Amazon appears to be proving effective at reducing new clearing for explicit soy production, according to a survey published Monday by Greenpeace and the Brazilian Vegetable Oils Industry Association. The moratorium, which was signed by some of the largest soy crushers in the Amazon in response to a campaign by environmental group Greenpeace, went into effect in October 2006. While soy is believed to be having an indirect impact on deforestation by driving up land prices and competing with the dominant form of land use in the Amazon — cattle ranching — the news is a hopeful sign for conservationists.

(03/11/2008) Next generation biofuels may trigger the ecological collapse of the Amazon frontier and could have profoundly unexpected economic consequences for the region, warns a paper published in Philosophical Transactions of the Royal Society B. Dr. Donald Sawyer writes that “interacting with climate change and land use, the upcoming stage of cellulosic energy could result in a collapse of the new frontier into vast degraded pasture.” The shift could increase the incidence and severity of fires, reduce rainfall in key agricultural zones, exacerbate forest die-back and climate change, and worsen social instability. Sawyer says that while difficult to anticipate, the worst outcomes could likely be avoided be promoting “intensified and more sustainable use” of already cleared areas, minimizing new deforestation, and encouraging “sustainable use of natural resources by local communities.”

(07/09/2008) Malaysia’s Land Development Authority FELDA has announced plans to immediately establish 100,000 hectares (250,000) of oil palm plantations in the Brazilian Amazon. The agency will partner with Braspalma, a local company, to form Felda Global Ventures Brazil Sdn Bhd. FELDA will have a 70 percent stake in the venture. The announcement had been expected. Last month Najib said Malaysia would seek to expand its booming palm oil industry overseas. The country is facing land constraints at home.