“The area revealed in this study is twice the size of the Amazon, and shows that farmers are protecting and planting trees spontaneously,” said Dennis Garrity, the World Agroforestry Centre’s Director General. “The problem is that policymakers and planners have been slow to recognize this phenomenon and take advantage of the beneficial effect of planting trees on farms. Trees are providing farmers with everything from carbon sequestration, to nuts and fruits, to windbreaks and erosion control, to fuel for heating and timber for housing. Unless such practices are brought to scale in farming communities worldwide, we will not benefit from the full value trees can bring to livelihoods and landscapes.”

The World Agroforestry Centre notes the wide range of benefits trees offer to farmers, including the provision of food, medicine, timber, fuelwood and commodities, as well as fodder and shelter for livestock and fertilizer to boost crop yields and enrich soils. Products from trees — fruit, nuts, fiber, and resins — can boost and diversify income streams for rural populations, while trees themselves can help control erosion, fortify water supplies, and increase local biodiversity.

“If planted systematically on farms, trees could improve the resiliency of farmers by providing them with food and income,” said Tony Simons, Deputy Director General at the World Agroforestry Centre. “For example, when crops and livestock fail, trees often withstand drought conditions and allow people to hold over until the next season.”

“What trees essentially provide to farmers is choice. Choice of enterprise, choice of market, choice for diversification, choice for low labour requirement, choice for multiple function. Developing country farmers are spoilt for choice. Whilst Western Europe has some 250 native tree species and North America has a larger set of 600 trees species—the developing tropics has a staggering 50,000 tree species to manage and utilize. The priority is to find the right tree for the right place for the right use.”

The study’s results challenge the conventional assumption that agriculture represents a trade-off “between people and trees.”

“This study offers convincing evidence that farms and forests are in no way mutually exclusive, but that trees are in fact critical to agricultural production everywhere,” said Professor Wangari Maathai, founder of the Green Belt Movement. Professor Maathai was awarded the 2004 Nobel Peace Prize for her efforts to increase community forestry through reforestation across Kenya.

The World Agroforestry Centre hopes that the findings could help rural farmers win recognition, and compensation, for the carbon stored in trees across agricultural landscapes under a proposed U.N. framework for mitigating climate change. The Centre with working with the United Nations Environment Programme (UNEP) to develop “a standard method for measuring carbon storage on all types of landscapes, which could provide a basis for providing farmers with a financial incentive to increase tree cover on their farms,” according to a statement from Consultative Group on International Agricultural Research’s World Agroforestry Centre (CGIAR).

“The data in this report illustrate that agroforestry will be critical to efforts aimed at making agriculture more productive and sustainable in order to contribute to the alleviation of climate change,” said Garrity. “It is estimated that further investments in agroforestry over the next 50 years could remove significant amounts of carbon dioxide from the atmosphere.”

(07/31/2009) The highly touted reforestation project launched by orangutan conservationist Willie Smits in Indonesian Borneo is detailed in this week’s issue of Science.

(07/30/2009) A new analysis reports that ecological restoration generally deliver benefits for both conserving biodiversity and supporting human livelihoods, but does not completely reverse degradation caused by humans.

(06/22/2009) Brazil will pay small farmers to plant trees in deforested parts of the Amazon under a plan unveiled Friday by President Luiz Inacio Lula da Silva.

(06/01/2009) Despite being one of the last habitable land masses on earth to be settled by man, Madagascar has lost more of its forests than most countries; less than 10% of its original forest cover now remains, and much of that is degraded. Political turmoil that erupted earlier this year continues to rumble on and the ensuing lawlessness has created the opportunity for illegal logging syndicates to plunder national parks, most notably Marojejy and Masoala, for valuable hardwoods and wildlife.

Polluted, degraded ecosystems can recover in less than a lifetime

(05/31/2009) Restoration efforts can return polluted or degraded landscapes to previous states in less than a lifetime, according to study Yale School of Forestry and Environmental Studies. The study rebuts a common assumption that ecosystem recovery takes centuries, even millennia.

In exchange for marriage certificate Indonesians must donate trees

(03/05/2009) An Indonesian district in West Java, Garut, has started a unique program to support reforestation. As reported by Reuters, any couple planning to get married must give ten trees to local authorities for reforestation efforts before marriage will be legally sanctioned.

Could engineering rainforests save the planet from global warming?

(01/21/2009) At the Smithsonian symposium entitled “Will the Rainforests Survive?”, leading tropical biologists vigorously debated current threats to the rainforest and what the future may hold. While climate change was identified as a leading threat to rainforests, many of the scientists argued that the tropics may also be the key to mitigating the impact of global warming. 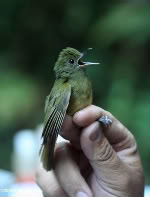 European conquest of the Americas may have driven global cooling

(12/18/2008) Recovery of forests following the collapse of human populations in the Americas after the arrival of Europeans may have driven the period of global cooling from 1500-1750 known as the Little Ice Age, report researchers speaking at the annual meeting of the American Geophysical Union in San Francisco. By some estimates, diseases introduced by Europeans may have killed more than 90 percent of population on the New World within a century of first contact. The rapid depopulation led to large-scale abandonment, and subsequent reforestation, of agricultural lands in the Americas. Analyzing charcoal found in soils and lake sediments at sites across the Americas, Richard Nevle and Dennis Bird found evidence to suggest that this forest regeneration sequestered enough carbon to trigger global cooling.

Africa calls for “full-range” of bio-carbon as climate solution

(12/10/2008) A coalition of 26 African countries is calling for the inclusion of carbon credits generated through afforestation, reforestation, agroforestry, reduced soil tillage, and sustainable agricultural practices in future climate agreements.

Rural depopulation to have biodiversity impacts

(12/01/2008) Urbanization — and accompanying rural abandonment — may have profound implications for global biodiversity and therefore should factor into conservation planning, argue researchers writing in the December issue of Tropical Conservation Science.

(10/16/2008) Brazilian researchers are closer to developing a way to establish large-scale mahogany plantations, reports the ITTO in its bi-monthly update. Scientists at the Federal Rural University of Amazonia (UFRA) have found that planting a matrix of mahogany with cedar reduces the incidence of the Hypsipyla grandella caterpillar, a chief pest of mahogany that has doomed previous attempts to reforest with the valuable hardwood species.

Regrowing the Amazon rainforest will require help from bats and birds

(09/15/2008) As large tracts of Amazon rainforest are degraded by industrial logging and cleared for cattle pasture and agriculture, other deforested areas are abandoned and being reclaimed by forest. Understanding this recolonization of degraded forest lands by pioneer species will critical to efforts to rehabilitate restore forests around the world.

Reforestation a growing, but complicated, initiative

(06/12/2008) As the rate of deforestation continues apace — 13 million hectares per year in a global basis — several countries have begun to look at reforesting degraded areas to aid suffering biodiversity, indigenous groups, and small local economies. However most of the interest and activity surrounding reforestation is as a tool to mitigate climate change. A new program just launched by the Nature Conservancy and several local partners plans to plant a billion trees in the fragmented Atlantic Forest of Brazil. The United Nations Environmental Program has already planted over two billion trees worldwide and plans to plant five billion more. China has planted billions more. However effective reforestation is not proving as easy as simply planting trees and waiting for them to grow, in fact, sometimes it may be best to leave the whole process to nature.

(09/06/2007) Deforested landscapes in the Brazilian cerrado show hopeful signs of recovery even after long periods of intensive use, reports a study published in the journal Biotropica. Analyzing the natural reestablishment of native trees in former pastureland located in the dry woodlands of the Brazilian cerrado, a team of researchers found that while species richness was lower in older pasture, density and composition of regenerating trees did not change with pasture age.