New Amazonian reserve saves over a million acres in Peru

On August 27th Peru’s Ministry of the Environment approved the creation of the Matses National Reserve to protect the region’s biodiversity, ensure its natural resources, and preserve the home of the Matses indigenous peoples (known as the Mayorunas in Brazil). The park is 1,039,390 acres (or 420,626 hectares) of lowland Amazonian rainforest in eastern Peru.

The park is the culmination of over a decade of work by the local non-profit CEDIA(the Center for the Development of the Indigenous Amazonians) funded in large part by the World Land Trust-US.

“Like so many other remote indigenous peoples, [the Matses] have been forced to defend their homelands from logging and oil companies in a bid to preserve their ancient way of life and protect the amazing Amazon rainforest… These short-sighted commercial activities have worked against indigenous peoples and conservationists to prevent this critical protected area from being established,” a press release by the World Land Trust-US stated.

Long unknown to the world, the Matses people were first contacted in 1969 by Christian Missionaries. The indigenous group has since remained in nearly complete isolation, retaining their traditions and living through sustainable hunting and fishing. The preserve protects the Galvez and Yaquerana Rivers, which the Matses people depend on for fishing. The group is eminently skilled with the bow and the arrow—their unique arrows measure two meters in length—which they use for hunting. The Matses group are also known as the ‘cat people’, because of distinct facial tattoos and piercings worn by the women which resemble the whiskers of a cat. 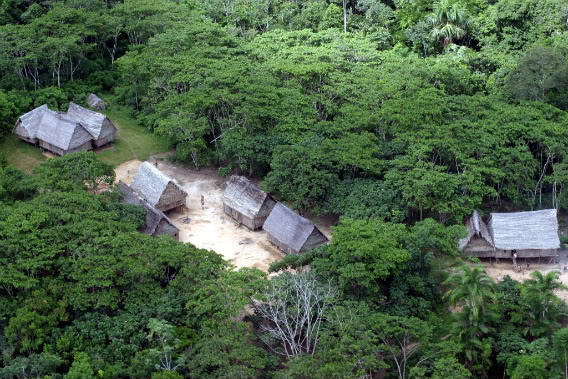 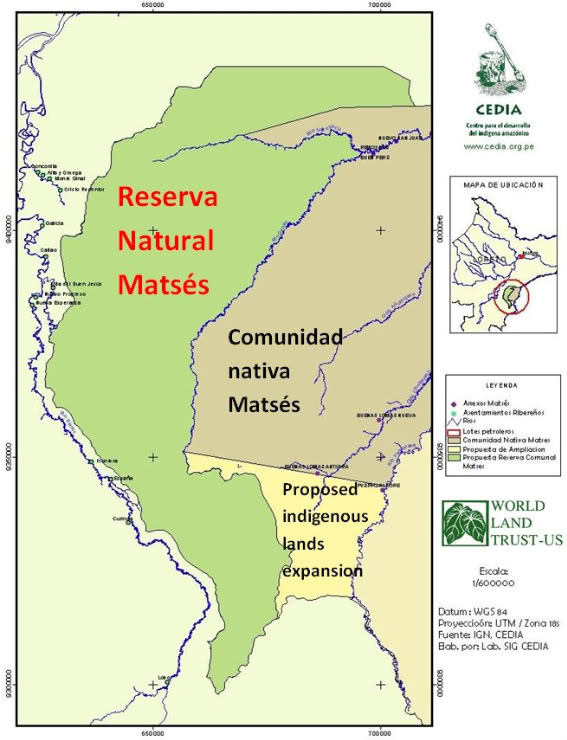 Map of the new reserve. Map courtesy of The World Land Trust-US.

(08/17/2009) Ariel photos show proof of illegal logging for mahogany occurring in a Peruvian reserve set aside for uncontacted natives. The photos, taken by Chris Fagan from Round River Conservation Studies, show logging camps set-up inside the Murunahua Reserve, meant to protect the uncontacted indigenous group, known as the Murunahua Indians, in the Peruvian Amazon.

(05/25/2009) A partnership between local villages and conservation groups, headed up by the Bonobo Conservation Initiative (BCI), has led to the creation of a new 1,847 square mile (4,875 square kilometer) reserve in the Democratic Republic of Congo (DRC). The reserve will save some of the region’s last pristine forests: ensuring the survival of the embattled bonobo—the least-known of the world’s four great ape species—and protecting a wide variety of biodiversity from the Congo peacock to the dwarf crocodile. However, the Kokolopori Bonobo Reserve is worth attention for another reason: every step of its creation—from biological surveys to reserve management—has been run by the local Congolese NGO and villages of Kokolopori.

(04/22/2009) War-wearied Afghanis received uplifting news on Earth Day this year. Their nation has announced the creation of the nation’s first national park, Band-e-Amir, protecting a one-of-a-kind landscape encompassing six sky-blue lakes separated by natural dams. Announced by Afghanistan’s National Environmental Protection Agency (NEPA) at a ceremony in the FAO Building at the Ministry of Agriculture, Irrigation, and Livestock in Kabul this morning, key funding for the park was provided by The United States Agency for International Development (USAID).