Urgent conservation measures are needed to protect some of the world's most endangered primates from the hunting, logging, and oil palm development in a region that has only recently emerged from a period of civil strife, report researchers writing in the open-access journal Tropical Conservation Science.

Surveying forests reserves, National Parks, private forests, and unprotected forests in Tanoé forest, a swampy zone in southeastern Côte-d’Ivoire that is part of the fast-dwindling but biologically-rich Upper Guinea forest region, Sery Gonedelé Bi and colleagues recorded 11 species of primates, including the critically endangered Diana Roloway (Cercopithecus diana roloway) and the endangered Cercocebus atys lunulatus and Colobus vellerosus. The researchers — who also suspect the presence of Miss Waldron’s red colobus (Piliocolobus badius waldronae), another critically endangered primate that is listed among the world's 25 most threatened, in the area — found that protected forests in their study area seem to harbor more species (eight) than unprotected forests (six), but that the latter are under threat from hunting, logging, and other forms of forest resource exploitation, including new interest in the area for oil palm plantations. The authors say the results show "this forest represents the most ‘threatened hotspot’ for primate diversity and a priority for primate conservation in West Africa." 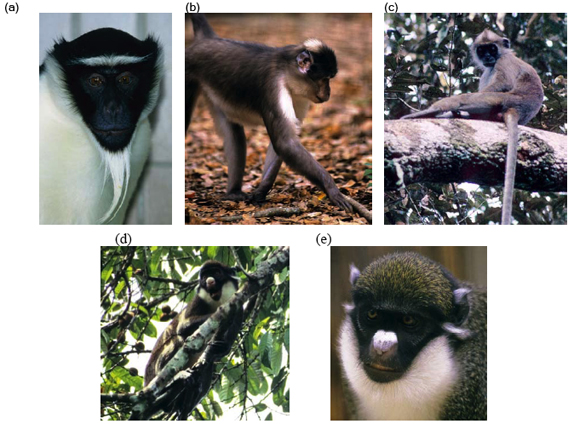 Photos of some of the primates found in the Tanoé forest. (a) Cercopithecus diana roloway (photo by J-M Lernould), (b) Cercocebus atys lunulatus, (c) Procolobus verus, (d) and (e) Cercopithecus petaurista petaurista. Photos (b), (c), (d) and (e) kindly provided by Noel Rowe/All the World’s Primates.

"Throughout Tanoé forest, Primate Conservation Societies have a unique opportunity to prevent the extinction of West African primates that are under severe threats," they write.