Famed undersea explorer Jacques Cousteau had a favorite shark: the oceanic whitetip, or Carcharhinus longimanus. He said they were the most dangerous of all sharks, more so than the great white (Carcharodon carcharias).

Some researchers believe the species used to be one of the world’s most abundant vertebrates longer than 6 feet (1.8 meters).

Today, however, the animal is one step away from extinction, pushed to the brink by overfishing.

While sharks are often pulled up accidentally by boats hunting other fish, especially tuna, many vessels target them intentionally, hoping to harvest their fins, meat, and, sometimes, their teeth and internal organs. Such vessels often make use of special tools known as wire leaders and shark lines, whose use is minimally regulated by the multilateral bodies that govern international fishing grounds.

Now, those devices may finally face a reckoning.

In a bid to save the oceanic whitetip, the U.S. and Canada have asked the Western and Central Pacific Fisheries Commission (WCPFC), which governs tuna fisheries in those waters, to prohibit the use of wire leaders and shark lines.

The WCPFC could vote on the proposal at its annual meeting, to be held next week in Da Nang, Vietnam.

A wire leader raises the likelihood of keeping what gets hooked on the line; a shark line increases the chance of hooking a shark in the first place. The WCPFC currently allows boats to use one or the other, but not both simultaneously.

Advocates for banning both outright say that’s a loophole taken advantage of by captains and companies that ignore the rules amid a vacuum of oversight.

Legal or not, decades of overfishing has been devastating to many shark populations. Shark numbers in the open ocean have declined by an estimated 71% in the past half-century, with humans killing an estimated 100 million sharks per year.

A recent scientific analysis commissioned by the WCPFC found that oceanic whitetips, a critically endangered species, had plummeted by around 95%.

Banning wire leaders and shark lines would reduce fishing mortality of oceanic whitetips by 40.5%, and that of silky sharks (Carcharhinus falciformis), another threatened species, by 30.8%, according to research cited in the WCPFC proposal.

“It’s well-timed for action on this front,” David Gershman, officer for international fisheries at the Ocean Foundation, a U.S.-based nonprofit, told Mongabay. “Scientists have been raising concern about oceanic whitetip sharks for years now.”

Sharks ‘not simply a bycatch product’

A wire leader is a special type of fishing leader, which is the portion of the line that connects to the hook. Most leaders consist of monofilament plastic, but shark fishers prefer leaders made of wire, which the ocean predators can’t bite through as easily.

Shark lines, meanwhile, refer to a setup that can be deployed by longline vessels, which practice a commercial fishing technique in which thousands of baited hooks are dragged through the sea.

On a longliner fishing for tuna, the baited hooks are attached via thin branch lines to a colossal mainline trailed from the back of the boat. These hooks dangle several dozen meters below the surface, where tuna tend to swim.

To target shark, the crew can fasten additional fishing lines to the buoys propping up the mainline. The hooks on the ends of these so-called shark lines hang just a few meters deep, where those animals tend to be found in higher concentrations.

While the argument against wire leaders is usually framed in terms of minimizing bycatch, a growing body of evidence indicates the extent to which sharks are being intentionally targeted.

A recent Mongabay investigation into Dalian Ocean Fishing, a major Chinese tuna company, revealed that many of its boats made prolific use of both wire leaders and shark lines to deliberately catch huge numbers of sharks in the Pacific and Atlantic Oceans, according to dozens of interviews with its former deckhands conducted by Mongabay.

Just five of the company’s longliners slaughtered an estimated 31,000 sharks in the western Pacific in 2019, the investigation showed. At least four of these boats, and likely the fifth, used wire leaders and shark lines simultaneously in violation of WCPFC and Chinese regulations, according to the deckhand interviews.

Catching sharks was “100% intentional,” John Arsil, who worked on the company’s Long Xing 801 for from mid-2018 to late 2020, told Mongabay. The vessel caught dozens of sharks per day on average, he said. 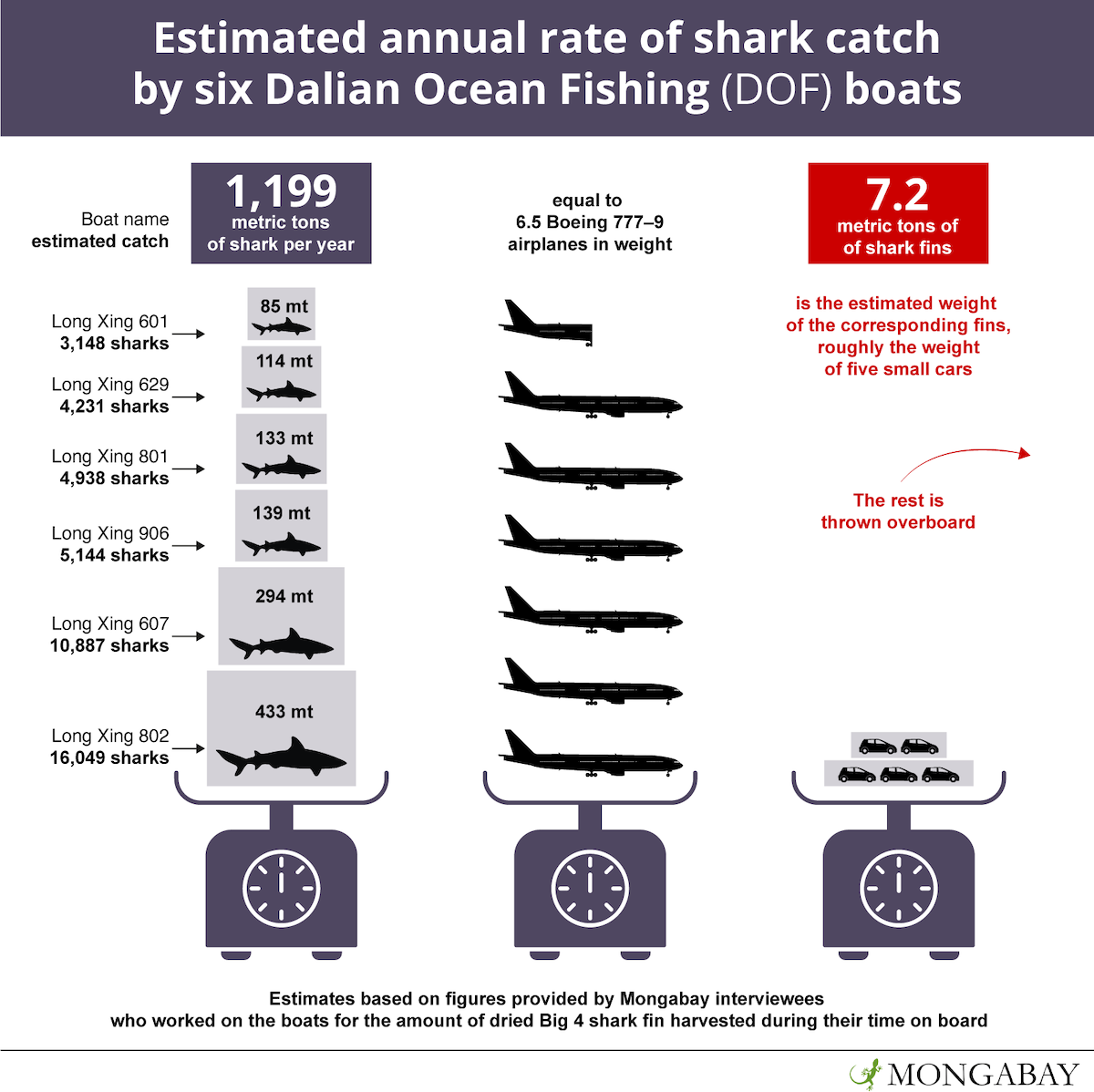 While the company broke a slew of rules, many other vessels legally target sharks, including for their meat, which is increasingly used in products from cat food to fish balls.

A report published earlier this month by marine conservation NGO Oceana found that 189,793 metric tons of blue shark (Prionace glauca) were legally caught and landed in 2019, according to publicly available catch data. That amounts to more than 7 million individual sharks, worth an estimated $411 million, the report says.

Some nations appear to primarily target shark in certain areas. Spain, for example, caught 3,222 metric tons of blue shark and 52 metric tons of of tuna in WCPFC waters in 2019, catch data shows.

“I think the world hasn’t come to grips yet with the idea that sharks, and blue sharks in particular, are not simply a bycatch product of tuna fisheries,” researcher Gilles Hosch, who worked on the Oceana report, said in an interview.

The report calls for more-deliberate oversight of international shark fisheries, which fall under the purview of multilateral bodies that were set up to manage tuna stocks but which have ended up presiding over shark fisheries by default, with no clear mandate to regulate them.

“Within their areas of competence, you have major shark fisheries, and they are entirely executed or implemented by vessels that are licensed and authorized to fish in these tuna fisheries,” Hosch said. “And in general terms, they do not declare their targeted shark fishing activities.”

One of these treaty organizations, the International Commission for the Conservation of Atlantic Tunas, did change its agreement to allow for direct management of sharks. “This is something that should happen across all of them,” Hosch said.

While conservationists agree a host of measures are needed to protect sharks — especially improving enforcement of existing rules, such as through an increased presence of observers, either human or mechanical, on fishing boats — the proposed gear restrictions are seen as a first step.

A similar proposal to ban wire leaders and shark lines, also submitted by the U.S., however, failed to make it to a vote at last year’s WCPFC meeting.

Last year’s proposal was supported by the Pacific Islands Forum Fisheries Agency (FFA), which represents 17 member states, including Australia, New Zealand and many Pacific Island countries, which have already put in place extensive shark protections in their own waters.

Japan, Taiwan, China and the EU declined to back last year’s proposal, calling for additional study of the matter, meeting records show. The proposal ultimately didn’t make it to a vote.

This year, the U.S. delegation has “worked hard” to lay the groundwork for a successful outcome, securing favorable recommendations from the WCPFC Scientific Committee, an important subcommittee, Canada’s fisheries agency told Mongabay. (The U.S. did not respond to questions by press time.)

This year’s proposal would also require sharks to be freed with as little trailing gear as possible, which research suggests would further improve survivability.

The Japanese and Taiwanese fisheries agencies told Mongabay last week they were still studying the matter and consulting with industry and could not share a position by press time.

China, the world’s largest fishing nation, prohibited its own fleet from using shark lines and wire leaders in March 2022. In 2019, it issued a directive saying it did not approve of any distant-water fishing operations targeting sharks, though conservationists have called for greater enforcement.

But China barring its own boats from using the two fishing implements did not not mean it would support doing so internationally, Li Yan, the head of the China Overseas Fisheries Association and a member of China’s WCPFC delegation, told Mongabay.

He said he thought the proposal was unnecessary and would distract from more important issues at the upcoming WCPFC meeting.

“The tiny change to the current measure will cause a long and fierce discussion at the convention meeting and give an inappropriate burden to the limit[ed] time for more important issues,” he wrote in an email.

“We do believe that the current shark measures have had a protective effect and that the Commission is faced with more urgent issues such as the skipjack target reference point, SPA [South Pacific albacore] roadmap, continuation of interim measures for COVID-19, and whether to resume observer coverage and the limited time available should be spent on addressing the concerns of FFA members.”

Eric Kingma, executive director of the Hawaii Longline Association (HLA) and a member of the U.S. delegation to the WCPFC, said banning wire leaders was a “first-level, best thing you can do to minimize your impact on sharks.”

In 2020, the HLA, which represents the largest U.S.-flagged longline fleet operating in the western and central Pacific, decided on its own to prohibit the use of wire leader. Earlier this year, the U.S. government, following the HLA’s lead, issued a ban of its own.

“We wanted to reduce our impacts on oceanic whitetip, and other sharks, by moving to mono leaders, which are globally recognized as a top-tier best practice for longline fisheries and other hook-and-line fisheries if you interact with sharks,” Kingma said in an interview.

While Kingma stressed that HLA boats targeted tuna, not shark, he said they previously used wire leaders because they’re more durable and they minimize the risk of flyback, which is when a tensioned line is bitten or torn off by a fish and hurtles back toward the crew. Although the HLA must now look at other ways to mitigate these issues, he said the tradeoff was worth it.

“Overall, I think it was the right move to make to reduce our impact on shark populations,” Kingma said.

“If other fleets replicated it, shark populations would benefit in the Pacific.”

Banner: A hook from a longline, fitted with a wire trace, off the coast of West Africa. Image courtesy of Tommy Trenchard/Greenpeace.