In Costa Rica, unlicensed fishers and regulators unite over a common enemy

PUNTA UVA, Costa Rica — Every morning, just after dawn, small-scale fishers Ettel Lattouche and Rafael Hernández head to the beach with their fishing gear to eke out a living. Together, the couple venture deep into the ocean off Punta Uva, a small town on Costa Rica’s southern Caribbean coast, and hope to return with some catch.

“Fishing is a lifestyle, a way of life,” said Hernández, a father of two.

Yet the couple operates in the shadow of the law. In 2005, the Costa Rican government introduced fishing regulations that ordered the Costa Rican Institute of Fisheries and Aquaculture (INCOPESCA) to stop issuing small-scale fishing licenses until a technical study had been carried out to prove that the country’s fisheries were being harvested sustainably.

This order was in response to commercial fishing in the Pacific, where industrial-scale vessels, including bottom trawlers, were widespread. By contrast, fishing in the southern Caribbean is largely artisanal and fishers use wooden traps, fishing rods and free diving.

“We’re not going to give licenses if we don’t know how much resources we have,” said Greymer Ramos, INCOPESCA’s representative in Limón province, which covers Punta Uva.

Local nonprofits say INCOPESCA lacks the funding and boats it needs to conduct the studies. 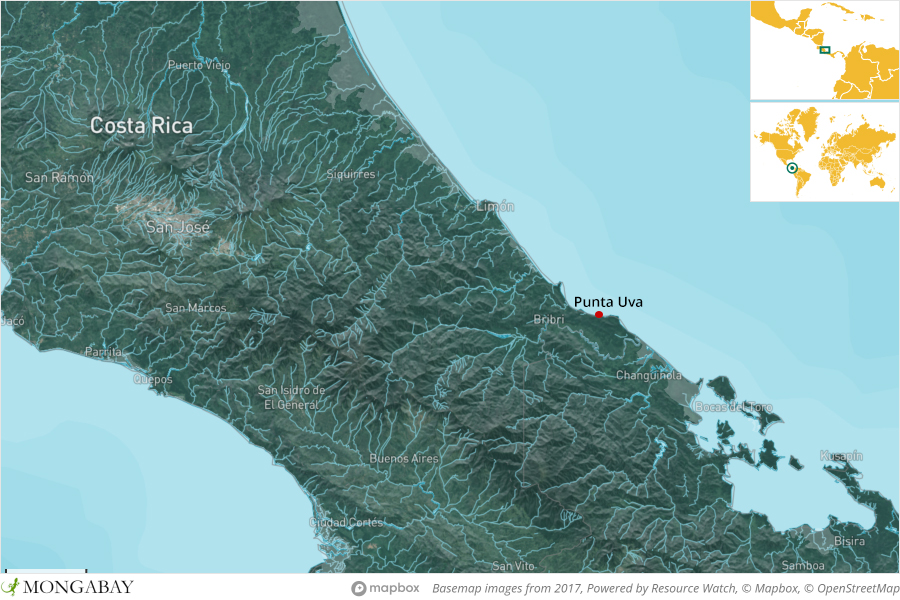 As the years passed, Lattouche and Hernández grappled with Hernandez’s occasional arrests and seizures of their boat and gear by the coast guard. But they needed to survive, so they still found ways to fish, while also working as tour guides to meet their family’s needs.

But in 2009, an unexpected turn of events would put them on track to obtaining official licenses.

That year, the couple and several other small-scale fishers in the area noticed a newcomer: a spiny, red-and-white zebra-striped fish. It looked nothing like the native fish species they’d known all their lives.

This fish, the red lionfish (Pterois volitans), had entered the Caribbean in the 1980s from its native waters in the South Pacific and Indian oceans. Humans most likely introduced it, possibly by releasing “unwanted lionfish” from aquariums into coastal waters, allowing the carnivorous species to spread across the Caribbean and the Atlantic, according to the U.S. National Oceanic and Atmospheric Administration. Without natural predators or competition, the lionfish flourished in the Caribbean, reproducing all year round and increasing dramatically in number over the past 15 years.

“It is considered the worst marine invasion there has been in the last two to three decades,” said Helena Molina Ureña, a marine biologist at the University of Costa Rica. “Its body is designed to eat if there is food … it eats whatever is there, as much as it can and as fast as possible.”

Lionfish consume more than 50 species of fish and crustaceans, including ecologically important species that artisanal fishers in the Caribbean depend on to survive. As the population of lionfish snowballed, native commercial fish species, such as snapper, lobster and shrimp, declined.

The artisanal fishers didn’t wait for the government or anyone else to respond to this threat. Using spears, nets and wooden traps, they swung into action and began to remove lionfish from the ocean.

In 2011, the fishers came together to start Asociación de Pescadores Artesanales del Caribe Sur (Southern Caribbean Artisanal Fishers’ Association, or APACS) to teach other locals to hunt lionfish. They also collected data on their work in the hope they could use it to show the authorities they deserved licenses.

“We have a study of the mass of lobster [and a census of all the fishers] here that did not exist in the Caribbean [before],” said José Ugalde, president of APACS. “We know exactly how many people are engaged in fishing.”

In 2012, APACS started an annual lionfish tournament to lure anglers, snorkelers, divers and others to remove lionfish from the Caribbean waters. They also began to promote local consumption of lionfish and now have a collection center where they buy the fish directly from local fishers, along with their regular catch, and distribute it to restaurants and tourists.

Through their concerted efforts over the past decade, APACS not only attracted attention from the Costa Rican government but also won grants to expand its efforts to include educational campaigns from the United Nations Development Programme’s Small Project Fund and the Washington, D.C.-based Inter-American Foundation.

“We are like illegal fishermen who are working for the welfare of the sea and ourselves in projects that we have worked hard on for more than 10 years,” said Andrés Hernández, a fisherman who oversees the APACS lionfish database, the first of its kind in Costa Rica. “We hope that we will be able to obtain licenses to [fish legally].”

In 2016, the government established the National Commission for the Management and Control of Lionfish to consolidate ongoing local efforts to tackle the lionfish in the Caribbean.

And in March 2022, former President Carlos Alvarado signed Law No. 10.155, which modifies several articles of the Fisheries and Aquaculture Law (No. 8436). This new regulation empowers INCOPESCA to collaborate with legally constituted fishers’ organizations like APACS to collect fishing data in exchange for licenses.

“The new law … allows us to collect scientific data that will help us make decisions for the benefit of communities,” INCOPESCA’s Ramos told Mongabay. “This would ensure that they can engage in a legal activity in line with our guidelines and generate income for their family so that they can survive.”

INCOPESCA has been sending its representatives to hold meetings with APACS to discuss the next steps.

Meanwhile, Lattouche and Hernández, the fishing couple, hope to receive their new licenses before the end of the year.