But the capacity of Tesso Nilo to support its wildlife is under threat, with data from the University of Maryland (UMD) visualized on the platform Global Forest Watch showing deforestation nearly tripled between 2020 and 2021. Satellite imagery from Planet Labs suggests this trend may be accelerating, with large swaths of the park’s remaining primary forest cleared in 2022.

However, despite its protected status, most of the park has been deforested and converted to plantation agriculture for tree crops such as oil palm. While some clearing occurred prior to the Tesso Nilo’s expansion, UMD satellite data show continued, rapid clearing of primary forest after 2009. 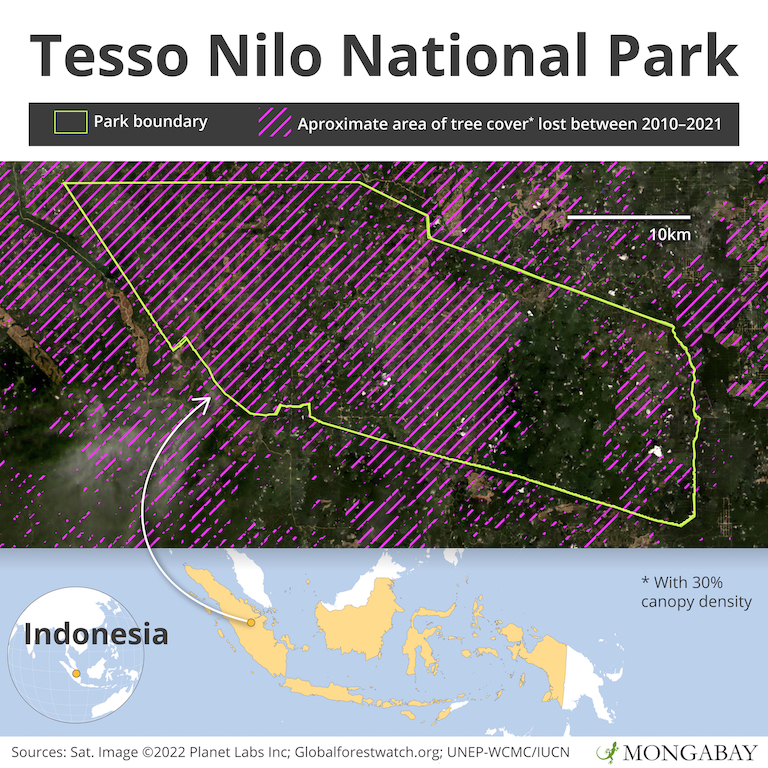 Much of the deforestation in Tesso Nilo appears to have been done on an industrial scale. In a report published in 2013, the World Wildlife Fund (WWF) found that the average illegal oil palm plantation size was 50 hectares, a size “far above the typical size for a smallholder, suggesting significant capital,” the report says.

UMD data show deforestation in the park peaked in 2012 before declining to a low in 2020. But in 2021 deforestation began to rise once again, marking the highest level of primary forest loss since 2016. In total, Tesso Nilo lost 67% of its primary forest between 2010 and 2021.

The post-2012 drop in deforestation was largely due to conservation efforts such as those of the Tesso Nilo National Park Center, according to Yuliantony, the executive director of the Tesso Nilo National Park Foundation. Yuliantony told Mongabay that conservation activities decreased due to the COVID-19 pandemic, which contributed to the uptick in forest loss in 2021. He added that high palm oil prices are also driving encroachment.

“But at the same time the price of palm oil has surged and this became a lure to open land for oil palm planting primarily at a time when job conditions are difficult,” Yuliantony said.

The situation in Tesso Nilo appears somewhat at odds with the rest of the country, with recent analysis by watchdog Chain Reaction Research finding deforestation for palm oil declined in Indonesia, Malaysia and Papua New Guinea in 2021 despite record prices for the commodity. Palm oil is the world’s most widely used vegetable oil, and is found in products ranging from cosmetics to cookies.

While the park’s level of deforestation in 2021 pales in comparison to its rate of loss between 2010 and 2016, the upward trend is worrying conservationists and park officials. On Jan. 26, 2022, the Tesso Nilo National Park Center distributed a circular reiterating that the cultivation of oil palm is banned in the park. The circular was addressed to 15 village heads in the park area and 11 customs leaders with copies sent to the director general of natural resources and ecosystem conservation at the ministry of the environment and forestry, the governor of Riau, the Riau police chief, the Pelalawan district chief and a number of subdistrict heads.

“This condition is disturbing as it impacts the park’s ecology,” the circular stated, explaining that in addition to the loss of wildlife habitat, fertilizers and pesticides applied to oil palm crops can damage water sources and aquatic ecosystems.

In August 2021, authorities confiscated two excavators and arrested their operator, who was allegedly illegally building a canal in Tesso Nilo to drain soil in preparation for oil palm cultivation. However, some say this is just a drop in the bucket and more enforcement is needed to combat the scale of deforestation in the park.

The plight of Tesso Nilo has not escaped notice of officials in the higher echelons of government. In late 2021, Environment and Forestry Minister Siri Nurbaya Bakar chaired a meeting to discuss ongoing efforts to safeguard Tesso Nilo’s remaining ecosystems and restore those that have been degraded, while ensuring the well-being of the human communities that have resided in its forests for generations. She was accompanied by the district chief of Pelalawan, the deputy governor of Riau, the speaker of the provincial house of representatives and a line of local officials, as well as several Riau-based organizations.

A press release for the event stated the ministry, together with community groups, plans to continue environmental restoration and preservation efforts in Tesso Nilo. According to the press release, the program has been active since 2016 and focuses on around 36 square kilometers (14 square miles), amounting to 3.6% of the park’s area.

“Collaborative work continues,” Siti said. “Up to 2022, the program sees progress. Hopefully, the complex issue of Tesso Nilo can be resolved.”

This is a translated and adapted version of a story that was reported by Mongabay Indonesia and first published here on March 8, 2022.