With negotiations underway in Geneva for the UN Convention on Biological Diversity, Indigenous land rights have finally taken center stage. The human rights group Avaaz released a 30-page document calling for the full recognition of the rights of Indigenous Peoples and Local Communities (IPLCs) over their lands, waters, and territories within the post-2020 Global Biodiversity Framework (GBF), calling specifically for:

“… a new goal (Goal E), that ensures the 2050 vision includes IPLCs, and a new target that safeguards IPLC rights over their lands and waters by 2025.”

This is a historically important proposal. It acknowledges that if we truly want to achieve the top-level goal of the UN Convention — to save biodiversity and reverse the extinction crisis — we must simultaneously secure the land rights of Indigenous peoples and local communities at scale. We cannot achieve one goal without achieving the other.

The vital importance of IPLC lands

Let’s look at the numbers. If we include the vast stretches of biologically diverse land governed by Indigenous peoples and local communities, added to the 17% of land formally protected or conserved by governments (including OECMs), we have a total of approximately 34% of the world’s land area under protective governance, according to the recent Territories of Life Report. Note: a portion of government Protected Areas are also IPLC owned and/or managed (3.6% of total land area). 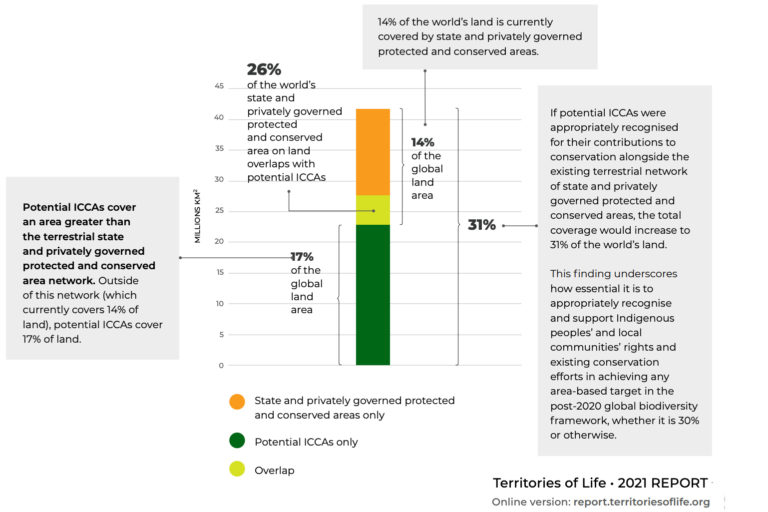 There is a growing coalition of countries and big NGOs calling for a 30% protection target by 2020, but effectively we’re already well past achieving that mark when IPLC lands are recognized. The problem is that these lands, which harbor as much as 80% of the world’s biodiversity, are not considered “protected” under the Convention despite an abundance of evidence that shows they are perhaps the most effective means of protecting biodiversity.

A new report finds that Indigenous lands are equally effective in delivering conservation results across Latin America and southern Asia, and even more effective than government protected areas in Africa. And a recent report by the World Resources Institute finds that in Latin America deforestation rates are 2-3 times lower than the background rate of deforestation in legally recognized Indigenous lands.

There is indeed a formal mechanism to recognize portions of Indigenous land for their conservation value, called Indigenous and Community Conserved Areas (ICCAs), but this program has had relatively little uptake in terms of registered ICCAs. Part of the reason for this is that secured land tenure is required. And herein lies the crux of the problem.

The vast majority of Indigenous peoples and local communities still do not possess legal title to their lands, which they have occupied in some cases for thousands of years. According to the Tenure Facility, it is estimated that at least half the world’s land falls within IPLC territories, yet governments recognize legal ownership of only one-fifth of these lands.

Overcoming a legacy of abuse

Many human rights groups worry that with so much IPLC land lacking clear land tenure, the push for an expanded protected area network under the new UN Global Biodiversity Framework could lead to land grabs or other human rights abuses by governments. This concern led to the publication of the “Marseilles Manifesto” last summer, calling for a total halt to new protected areas that would lead to the displacement or abuse of Indigenous peoples and local communities. These fears are not without justification.

There is a historic legacy of human rights abuses related to conservation. The World Wildlife Fund (WWF) recently came under fire for supporting a project involving torture of local community residents by park rangers in Nepal (the organization was cleared of complicity in 2020). A similar occurrence with rangers abusing local Indigenous Baka populations in the Congo basin was also reported. Just this week, the U.S. House of Representatives passed a law to tie conservation funding with human rights protections, citing abuses involving projects in Central America.

The NGO Rights + Resources Initiative (RRI) released an important report entitled “Reconciling Conservation and Global Biodiversity Goals with Community Land Rights in Asia”, the first of a series to look at historic lands rights abuses and the distrust felt by IPLCs regarding the global conservation agenda:

“In an environment where identity and territorial rights are either not recognized or ignored, spatial conservation targets (like 30×30) are largely met with skepticism and concern by Indigenous and community leaders.” — RRI

We should make it clear that the UN Convention on Biological Diversity (CBD), from its inception in 1992, has specifically recognized the role of Indigenous peoples through two articles — 8(j) and 10(c) — which legally oblige governments to respect, protect, and promote traditional knowledge, practices, and customary uses of biological resources by Indigenous groups. Despite this language, IPLCs still have largely been marginalized from the UN halls of power and sidelined from the CBD negotiations:

“IPLCs have historically been excluded from important discussions and decisions about the lands they inhabit and the natural resources found there. This results in the development of conservation policies that lead to land grabs, in pollution, in inequitable allocation of financial resources, and in other pressing social problems.” — Avaaz

The era of marginalization must come to an end. The Secretariat of the CBD issued a special statement last year on the occasion of the International Day of the World’s Indigenous Peoples, declaring for the first time states that Indigenous peoples must be at the center of a new social contract to save the natural world:

“It is clear that many challenges remain to chart a new course for the decade ahead. Indigenous peoples’ values, collective actions and messages are central in this effort.” — Elizabeth Maruma Mrema, Executive Secretary of the UN Convention on Biological Diversity

The CBD also released a video to go along with the statement, entitled “Centering Indigenous Peoples in Decision-making.”

This new narrative on the importance of IPLC conservation follows from the publication of the Local Biodiversity Outlooks (2), a report led by Forest Peoples Program that documents 50 case studies of Indigenous peoples and local communities who are leading on the preservation of biodiversity. Almost every day, more examples of Indigenous leadership in conservation are documented — from Maasai pastoralists in Kenya to Wuikinuxv guardians in British Colombia — proving that when Indigenous people have full governance of their lands it can be a gamechanger for biodiversity.

The authors of a new paper have found that Indigenous territories contain significantly higher species populations that areas outside IP lands. They argue from a scientific perspective that, large, legally designated territories are necessary for indigenous peoples to maintain their traditional livelihoods and to preserve the country’s biodiversity. In other words, IPLC land tenure is a form of conservation, perhaps the most effective form we have available to us.

This is what RRI and other groups call “rights based conservation” — an approach that acknowledges the wrongdoings of the past and calls for securing of customary land and territorial rights as “…a central component of any global strategy to protect or conserve 30% or 50% of the planet – and can even exceed those targets.”

There are parallels with this approach and the “No Rights, No REDD” position developed by the Alliance of Archipelagic Indigenous People (AMAN) in 2010, in response to the carbon crediting scheme that financially rewards governments for preserving their forests. Fast forward a decade, in the context of the negotiations for the post-2020 Global Biodiversity Framework, we see the emergence of a clear rights-based demand from Indigenous leaders: “If you want to include our territorial lands in your spatial targets, then first give us land tenure.”

Some NGOs have had a negative reaction to the idea that GBF would expand beyond the current extent of protected areas. There are several reasons for this. The first has to do with a wildly overblown assertion of the amount of human displacement that could occur under a 30% or 50% target — 1 billion people displaced is the figure often citied (Schliecher et al. 2019). This has been thoroughly rebutted by the lead authors of the “Global Safety Net” (Dinerstein et al. 2020), a peer-reviewed analysis of the world’s remaining natural land. One example from India clearly illustrates Schleicher’s problematic approach:

Another reason for opposition to expanded area-based targets stems from a lack of understanding of the diverse array of governance types that fit under the designation of “protected and conserved”. As I detail in my commentary at Mongabay — “30×30 is not a one-size fits all target” — countries with large rural populations and high levels of land conversion should not expand their protected areas (approximately one-third of all countries). And for other countries, there are more than 77 different designations and governance types, not to mention Other Effective Conservation Measures (OECMs) which are recognized under the Convention.

In the new GBF, all Indigenous and community lands that provide natural habitat for species could and should be incorporated into government targets, provided those communities are given proper land tenure and territorial finance for their conservation efforts. In some cases, for example in California, this could involve governments paying Indigenous tribes to repurchase their ancestral lands.

In effect, we now have an opportunity now to accelerate IPLC land tenure rights fueled by a broader and more inclusive conservation agenda. If governments want to count all the high-biodiversity lands under Indigenous and community management as part of their official spatial targets, then they first need to guarantee land tenure for those communities.

It’s for this reason that over 150 Indigenous groups and NGOs (and 3.2 million individuals) have endorsed the Global Deal for Nature, a call to protect 50% of the world’s lands and seas by 2030, inclusive of all IPLC territories. This was backed up in the IUCN vote last year passing Motion 101, which specifies a science-based conservation target of “at least 50%” to give nature the maximum chance of survival. And this month, the International Panel on Climate Change (IPCC) echoed this in their new Working Group II Assessment Report, stating that “…conserving half may be necessary to restore the ability of natural ecosystems to cope with the damage wreaked on them.”

The logic is straightforward. After losing two-thirds of all animal populations in the last 50 years and with numerous ecosystems on the verge of collapse, we simple can’t afford to lose any more natural land to industrial development. The hunt for natural resources — timber, minerals, fossil fuels, industrial crops — is driving continued deforestation and land conversion and the displacement of IPLCs. Extractive development threatens biodiversity, and it also threatens the livelihoods and territories of Indigenous peoples and local communities.

The question is whether governments, especially in megadiverse countries, have the willingness to fully support Indigenous-led conservation efforts. This would entail aligning government policies to ensure, first, the revoking of all mining, oil & gas exploration and development concessions (including transportation infrastructure) without free, prior and informed consent. Second, it means the granting of full land tenure rights. In many contexts, for example the Mexican communal land system of ejidos, only usufructuary (temporary and/or limited) rights have been granted to administrate all aspects of the territory — the flora, fauna, waters, minerals, land, and air. Third, are financial resources. Governments should be funding IPLCs directly for the huge ecosystem contributions they make to nations and to the world.

Conservation is not the enemy. Yes, we must acknowledge the historic legacy of “fortress conservation” that displaced or harmed local communities in the past. But we must also acknowledge the grave threats that IPLCs face as multi-billion dollar corporations continue to seek to extract more and more profit out of the land. Conservation must work for people and nature, protecting both from the drivers of environmental loss. And that means placing the land tenure rights of Indigenous peoples and local communities at the heart of the post-2020 Global Biodiversity Framework.

More on this topic from Mongabay’s podcast: How Indigenous and local communities are fighting to gain title to their territories, listen here: