The Democratic Republic of the Congo (DRC) contains the bulk of Africa’s humid rainforest. But forests that were once dense, impenetrable and continuous are increasingly fractured by deforestation. New satellite data from the University of Maryland (UMD) show the country – particularly its northern portion – may be in for another rocky year in 2021.

Between 2002 and 2020, the DRC lost more than 5% of its primary forest, according to UMD data; much of this happened after 2013, with 2020 registering the second-highest amount of loss since data collection began in 2002.

Preliminary data for 2021 from UMD’s Global Land Analysis and Discovery (GLAD) lab suggests the DRC may be in for another bout of heavy deforestation this year. The lab detected several spikes of primary forest loss in March, April and May that were “unusually high” compared to the same time period in years past, peaking the week of April 12 when deforestation activity more than doubled over the average rate. 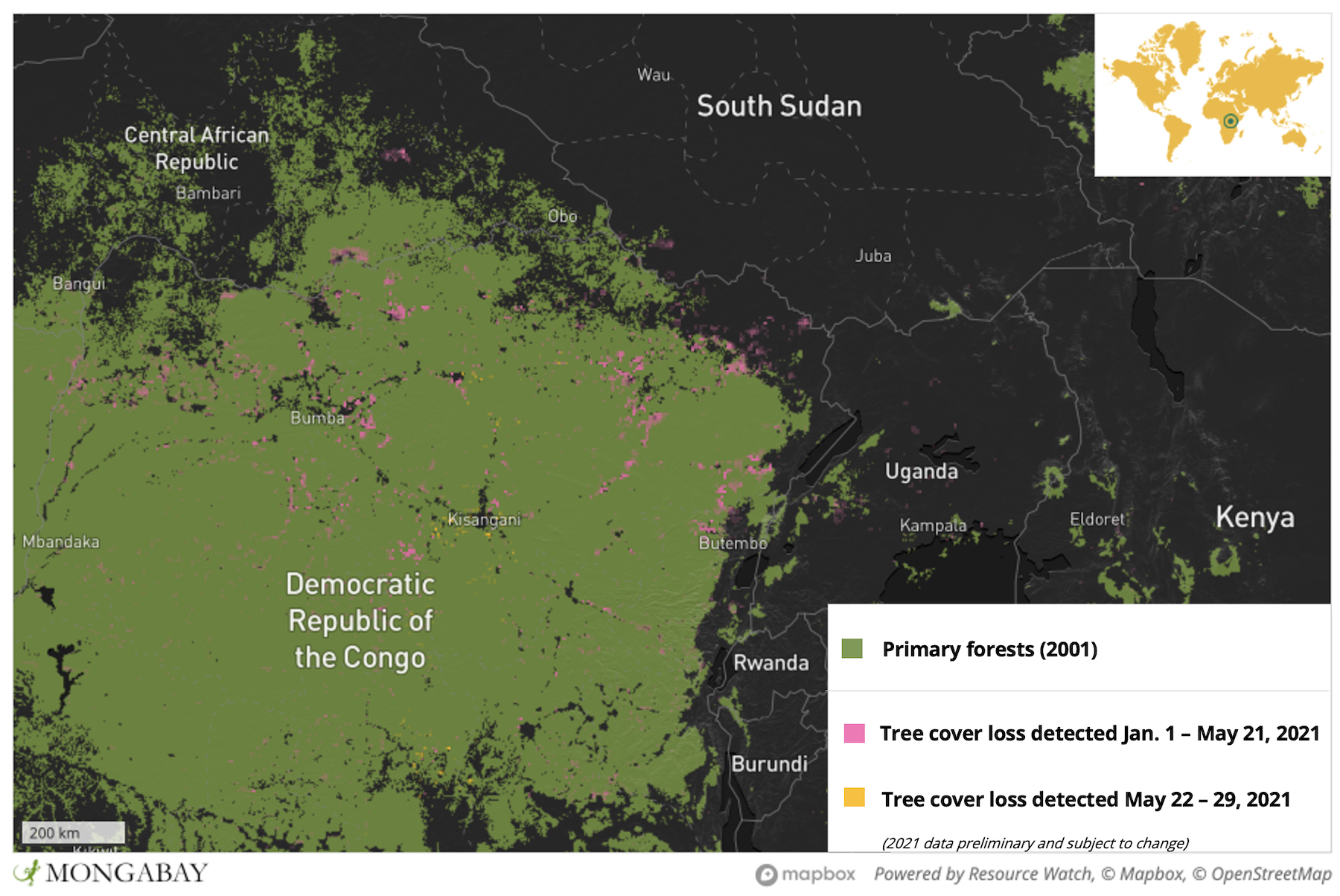 Much of this year’s forest loss appears to be taking place in the country’s northern portion, with the regions of Bas-Uélé, Mongala, Tshopo, Haut-Uélé and Ituri showing particularly high levels of deforestation activity. Even the DRC’s reserves and parks are feeling the pressure, with satellite data and imagery showing recent incursions into forest that is supposed to be under official protection.

Straddling Ituri and Haut-Uélè in the northeastern reach of DRC, Okapi Wildlife Reserve encompasses nearly 670,000 hectares (1.66 million acres) of largely pristine rainforest. The reserve is listed as a UNESCO World Heritage Site, and is inhabited by the Efe and Mbuti Indigenous groups. It was named for one of its most famous and secretive denizens, the okapi (Okapia johnstoni), which resembles a giraffe with a short neck, zebra stripes and an 18-inch tongue, and which was unknown to the western world until the early 20th century when British explorers and researchers confirmed the existence of this long-rumored “African unicorn.”

While the species historically had a wider range – including into Uganda – the forests of northern DRC contain all the world’s remaining wild okapis. And they don’t appear to be doing well. Assessments conducted in Okapi Wildlife Reserve – which harbors around 5,000 of the estimated 30,000 of the world’s remaining wild okapi – suggest the species declined by nearly half during the 1990s and early 2000s, and is continuing to do so. Because of the species’ limited and declining populations and continued threats, the okapi is listed as endangered by the IUCN.

Okapi Wildlife Reserve has historically been somewhat immune to deforestation relative to the surrounding forest and DRC at large. According to UMD data, the reserve lost 0.53% of its primary forest between 2002 and 2020 compared to Ituri’s 6.8% and Haut-Uélé’s 7.1%. But deforestation has been trending upward even here, with 2020 registering the highest level of primary forest loss since measurement began in 2002, and several high spikes of activity detected so far in 2021. 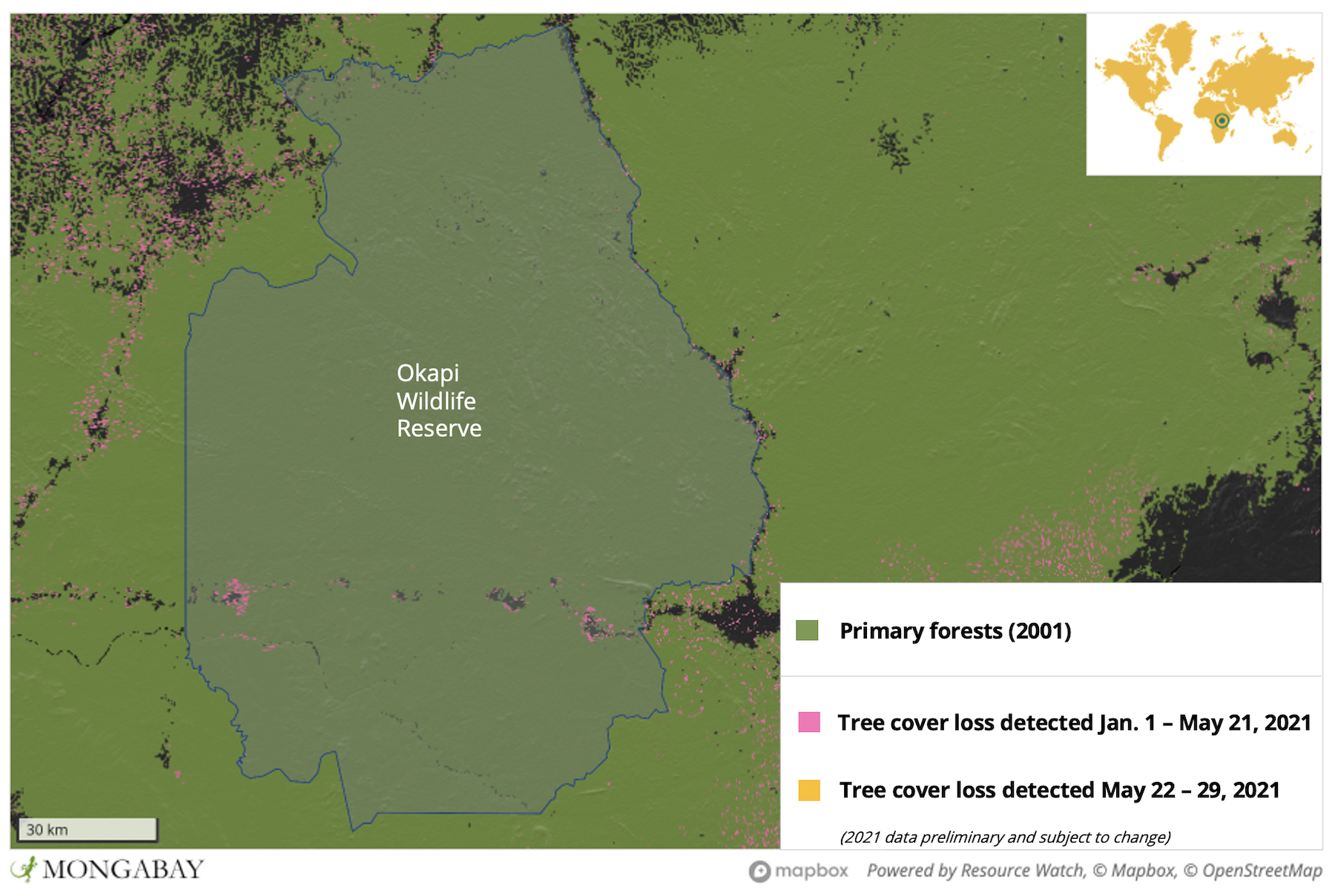 Most recent deforestation is taking place in the southern part of the reserve, where satellite imagery shows clearings proliferating along a road and river, and around settlements. The more remote northern portion is also experiencing a wave of expanding intrusions pockmarking ever-further into the rainforest.

Threats to Okapi Wildlife Reserve have included agricultural expansion, influxes of settlers from outside the reserve, gold mining and poaching.

“Mines draw in desperate people, depend on bush meat to feed the miners and are subject to extortion by rogue militias and the military,” John Lukas, co-founder of the Okapi Conservation Project told Mongabay in 2019.

“Secondly, clearing of forest by immigrants is an increasing threat along with logging in certain areas,” Lukas said. “Elephant poaching is declining but still a threat because the poachers are armed.”

Bili-Uéré also reportedly also harbors the largest population of eastern chimpanzees (Pan troglodytes schweinfurthii) in Africa, one that has a tool-using culture unlike anywhere else.

“We found that the tool types each have different distinctive characteristics,” Max Planck Institute primatology researcher Thurston C. Hicks told Mongabay in 2019. “The tools used by some of our chimpanzee communities to harvest driver ants are the largest known for insect prey in Africa, on average 1.2 meters long, but some are 2.5 meters! Given the painful bites these ants inflict, adding some extra length makes sense, but we still don’t know why they make them so long compared to other populations.”

Here too, Bili-Uéré and its wildlife is coming under increasing pressure. In addition to clearing for subsistence agriculture, deposits of gold and diamonds are luring outsiders and impoverished locals alike to clear forest and set up informal mines. Researchers say refugees are also coming over the protected area’s northern border from the Central African Republic. As the area is largely undeveloped, many those who move into the forest are relying on poaching and eating wildlife to survive.

Primary forest loss peaked in Bili Uére in 2019, according to UMD satellite data. After a brief downturn in 2020, deforestation appears to be on the rise on again, with preliminary data showing several spikes of “unusually high” clearing activity in the protected area in 2021. 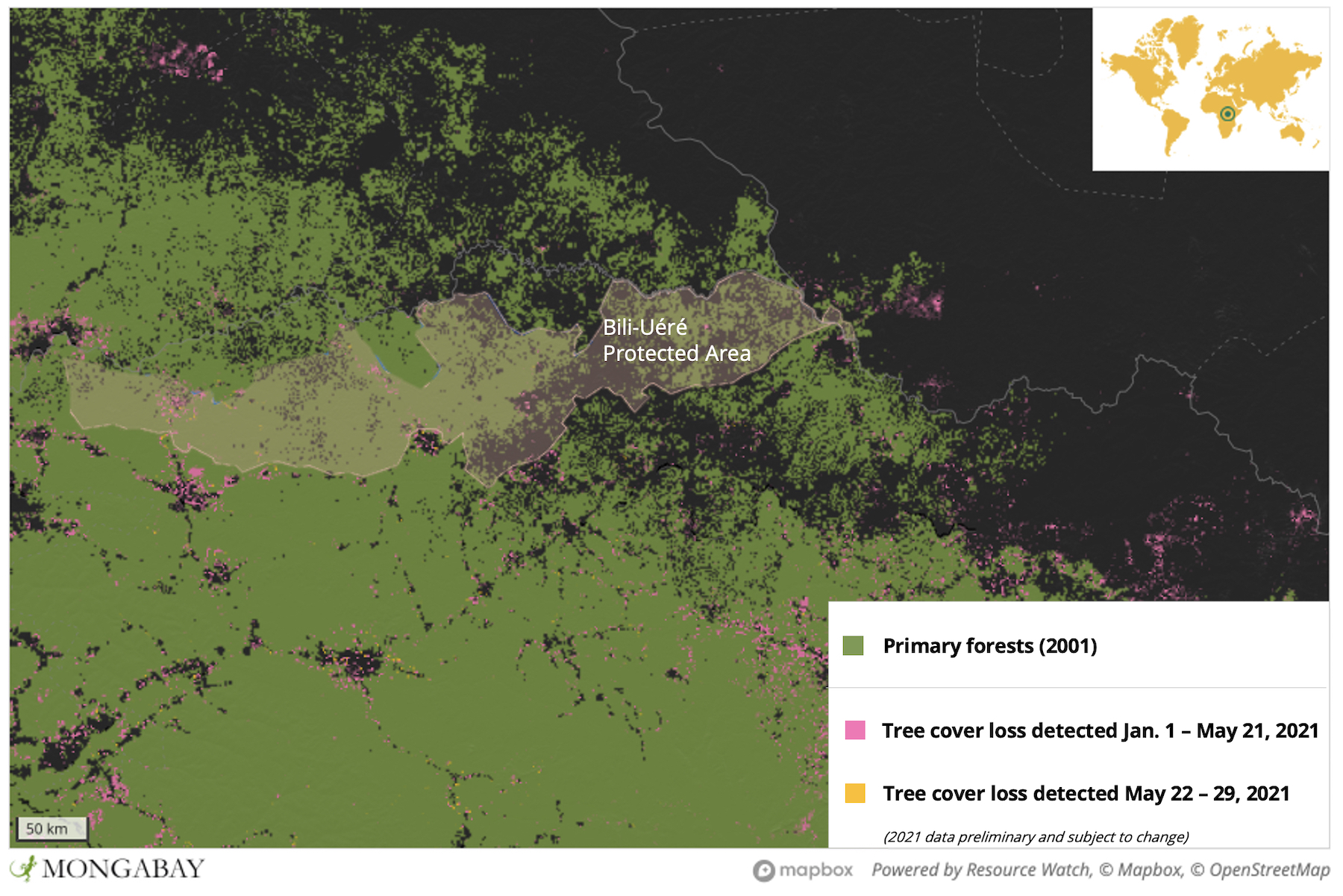 “If [Bili-Uérés chimpanzees] disappear, the tragedy of their loss will be compounded by the accompanying loss of a priceless opportunity allowing us to understand how great ape traditions spread across time and space,” Hicks told Mongabay n 2019. “Our activities are robbing these apes not only of their forests but their ‘wisdom of the elders,’ their ingenious cultural solutions to survival in the forests and savannas developed over hundreds or thousands of ape generations.”

Lack of political will

Shifting agriculture and fuelwood collection for charcoal production are widely considered the major drivers of deforestation in the DRC, exacerbated by logging, mining and large-scale agriculture. Researchers say efforts at reform have largely come up empty, primarily due to government inaction.

“There is no national plan to fight deforestation, that’s the problem,” Alain Engunda, outreach and training coordinator at the World Resources Institute in Kinshasa, told Mongabay in 2020.

A report published by the Center for International Forestry Research (CIFOR) in 2020 found that the DRC government has not fulfilled any of the promised reforms needed to achieve the country’s goal of increasing the country’s forest cover in from 58% to 63.5% by 2030. CIFOR cited “political changes and a lack of finance, capacity and political will” as the reasons behind this failure.

“In 2010, the capital of Kinshasa had 8 million inhabitants and needed around 5 million cubic meters of charcoal,” Engunda said. “This year, Kinshasa’s population stands at nearly 15 million. “If the government doesn’t provide alternatives, the need for charcoal is going to explode because if people don’t have electricity, they cut trees.

“If we go on like this, the loss of forests will continue to increase.”

Editor’s note: A previous version of this story misidentified the Ituri River as the Epulu River, which flows into the Ituri upstream from the area shown in the satellite image. We apologize for the error.