Primary forests in the tropics are declining at an accelerating rate according to analysis of satellite data released last week by the University of Maryland (UMD) and World Resources Institute (WRI). Since 2002, the tropics lost more than 60 million hectares of primary forests, an area larger than the combined land mass of the states of California and Missouri or the island nation of Madagascar.

The new data confirms that primary forest loss in the 2010s was nearly 30 percent higher than the 2000s despite global efforts to curb deforestation by creating mechanisms for producing tropical commodities more sustainably, helping indigenous peoples secure land rights, expanding protected areas, and improving forest monitoring. Average annual primary forest loss in the last five years (4.3 million ha from 2015-2019) of the study period was nearly 50 percent higher than the first five years (2.9 million ha 2010-2014). That rise however may not fully reflect the extent of the damage at the end of the decade: forest loss from fires that burned in the Amazon and Indonesia during the latter part of 2019 may not show up in the data until the following year due to cloud cover.

This post’s primary function is to provide some charts highlighting some of the key primary forest trends in the new data set. For additional context on tropical deforestation, trends in rainforests over the past 20 years, and the new UMD/WRI data presented on Global Forest Watch, please see:

Global tree cover loss, which encompasses primary forest loss as well as clearing of secondary forests and cyclical harvesting of tree plantations, rose: from an average of 17.1 million hectares a year in the 2000s to 23.1 million in the 2010s. This increase reflects both deforestation in natural forests and activity within an expanding area of plantations, the bulk of which are in Asia, Europe, and North America.

Trends in primary forests at the country level

Primary tropical forests are among the world’s most carbon-dense and wildlife-rich terrestrial ecosystems. Scientists therefore see their destruction as disproportionately damaging in terms of biodiversity loss and carbon emissions. In some years, emissions from destruction and degradation of tropical forests and peatlands may exceed the combined emissions of the entire transportation sector.

Deforestation is trending upward in the world’s two largest rainforests, the Amazon and the Congo. More details on deforestation in specific Amazon countries can be found here. 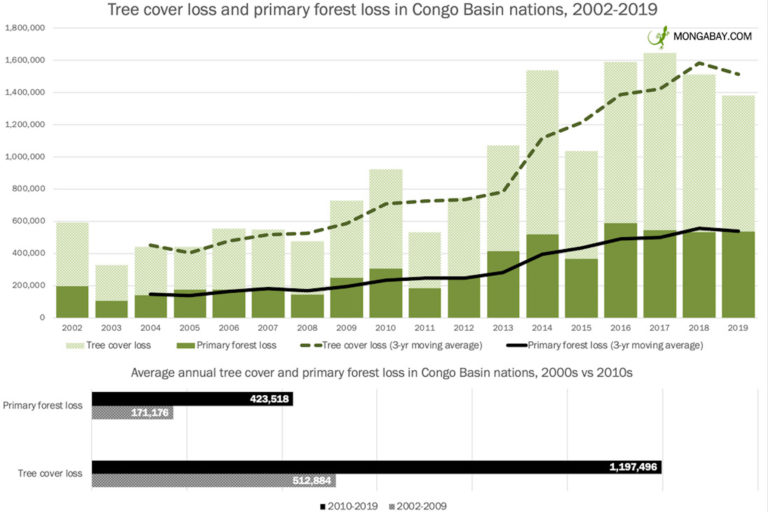 Ten sub-national jurisdictions accounted for nearly half of tropical primary forest loss between 2002 and 2019. The top four slots were states in Brazil: Pará, Mato Grosso, Rondônia, and Amazonas, while provinces in Indonesia occupied four of the other places among the top ten.

On a percentage basis, among states, provinces, and departments with more than 35,000 hectares of tree cover in 2010, no jurisdiction lost more primary forest than Riau, Indonesia where large swathes of rainforest and peat forest have been converted to acacia and oil palm plantations over the past twenty years. Five provinces in Cambodia lost more than 10% of their primary forests.

Mongabay’s decade in review — published in December 2019 — summarizes the 2010s for tropical forests:

The 2010s opened as a moment of optimism for tropical forests. Widely available satellite imagery via platforms like Google Earth brought new levels of accountability which, for the first time, meant the world couldn’t use ignorance as an excuse for not addressing the destruction of tropical forests. Deforestation in Earth’s largest rainforest — the Brazilian Amazon — was in the midst of a historic plunge, while governments around the world were pledging billions of dollars in new money toward a mechanism to compensate tropical countries for protecting their forests. Several countries closed out the decade with important new conservation initiatives, while activists, empowered with a new set of tools, pushed the private sector to begin adopting a new type of sustainability commitment: the zero deforestation policy for commodity production and sourcing. Some of the largest consumer-facing companies adopted these forest-friendly policies with near-term implementation targets. The world looked like it was on track to significantly reduce tropical deforestation by 2020.By the end of the 2019, however, it was clear that progress on protecting tropical forests stalled in the 2010s. On the climate front, a decade of science has mostly confirmed what we already knew 10 years ago: Tropical forests are deeply threatened by the current pace of climate change. Combined with ongoing deforestation, degradation, and fragmentation, the outlook for some of the planet’s largest forests, from the Amazon to Indonesia, is increasingly bleak.The 2010s were also marked by mixed progress for tropical forest conservation. Advances in remote sensing were undercut by backsliding on corporate and government commitments to protect forests. Gains in new protected areas were partially offset by a trend toward protected area downgrading, downsizing and degazettement (PADDD) in countries from Brazil to Indonesia. Efforts to recognize the value of healthy and productive natural forests were confronted with the challenging realities of implementation, public indifference and the punishing economics of rising demand for food, fiber and fuel in the context of unaccounted costs of environmental externalities. Political leaders in several important tropical forest countries turned a blind eye to — or in some cases even actively encouraged — threats against environmental defenders and the free press, contributing to hundreds of murders and assassinations of activists, indigenous leaders and journalists.The 2010s closed with rising deforestation and increased incidence of fire in tropical forests. According to the U.N., in 2015, global forest cover fell below four billion hectares (10 billion acres) for the first time in modern human history.