Last year the world lost some 119,000 square kilometers (45,946 square miles) of tree cover – an area the size of Nicaragua – according to satellite data collated by the University of Maryland (UMD) released today by World Resources Institute (WRI). Almost a third of that loss – or an area the size of Switzerland – came from primary humid tropical forests, which house most of the planet’s plant and animal species and play an important role in climate regulation.

The data run from 2001 to 2019 and show an overall increase in the deforestation of primary forest last year over 2018, thus ending a two-year decline and constituting the third-highest year of primary forest loss since the turn of the century. Brazil, the Democratic Republic of the Congo and Indonesia took the top three spots in terms of absolute primary forest loss, followed by Bolivia, Peru and Malaysia. The data also show some success stories, with deforestation trending down in several countries.

While what happens in 2020 remains to be seen, researchers worry the stories contained within the UMD data along with impacts from the COVID-19 crisis may portend another hard year for the world’s forests.

As in years past, Brazil won the top spot as the country that experienced the highest rate of deforestation overall. Around 46% occurred within primary forest, with 14,000 sq km (5,405 sq mi) cleared in 2019. With the exceptions of the country’s record-level, fire-driven deforestation in 2016 and 2017, Brazil’s primary forest loss was higher in 2019 than at any other time during the previous 13 years.

In terms of overall tree cover loss, which lumps in secondary forest, dry forest and also the occasional tree plantation, Brazil crept down a bit from 2018, with 27,000 sq km lost last year. The data show Brazil has lost 11% of its tree cover since 2000, and forest loss was up slightly in the Amazon Basin overall. 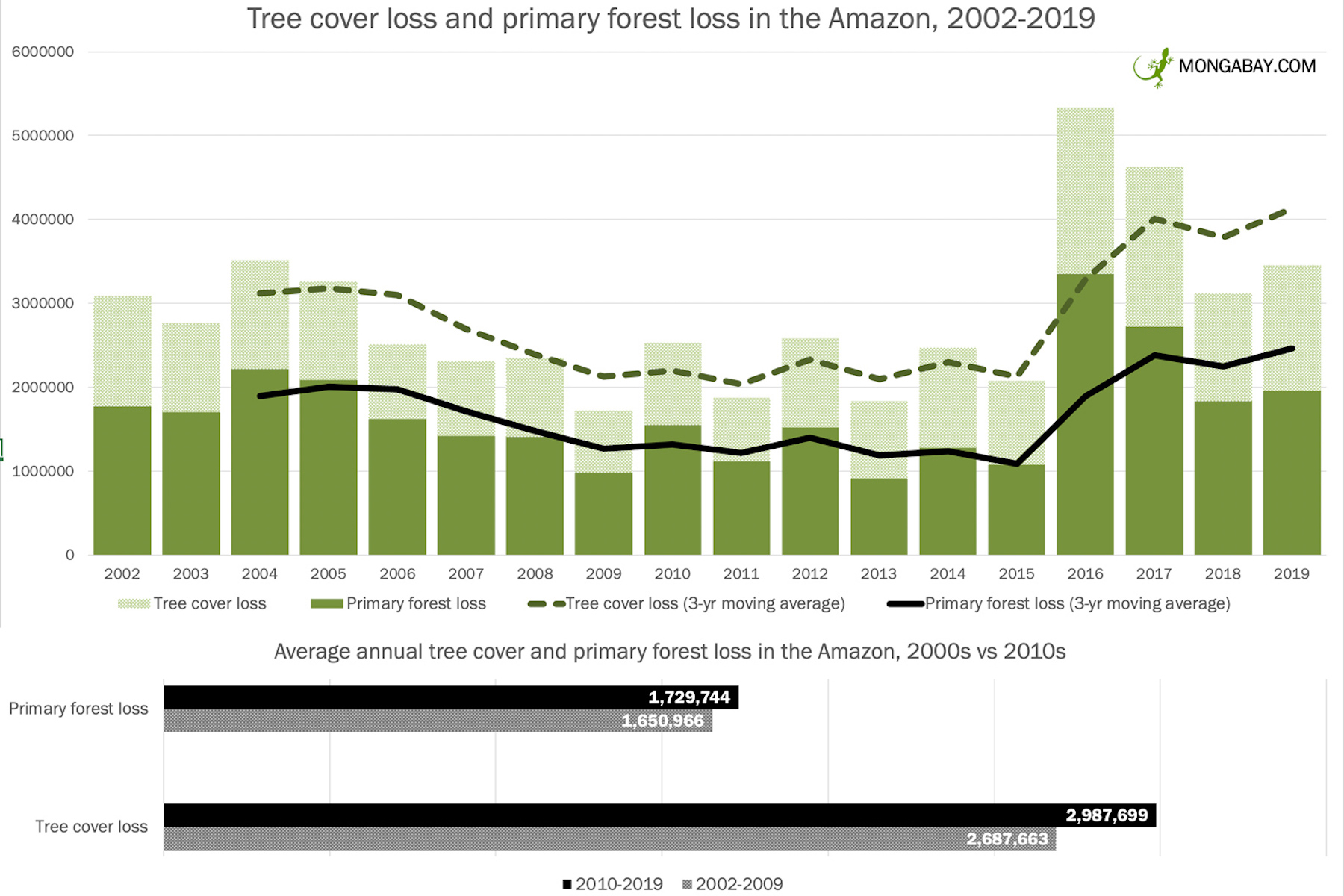 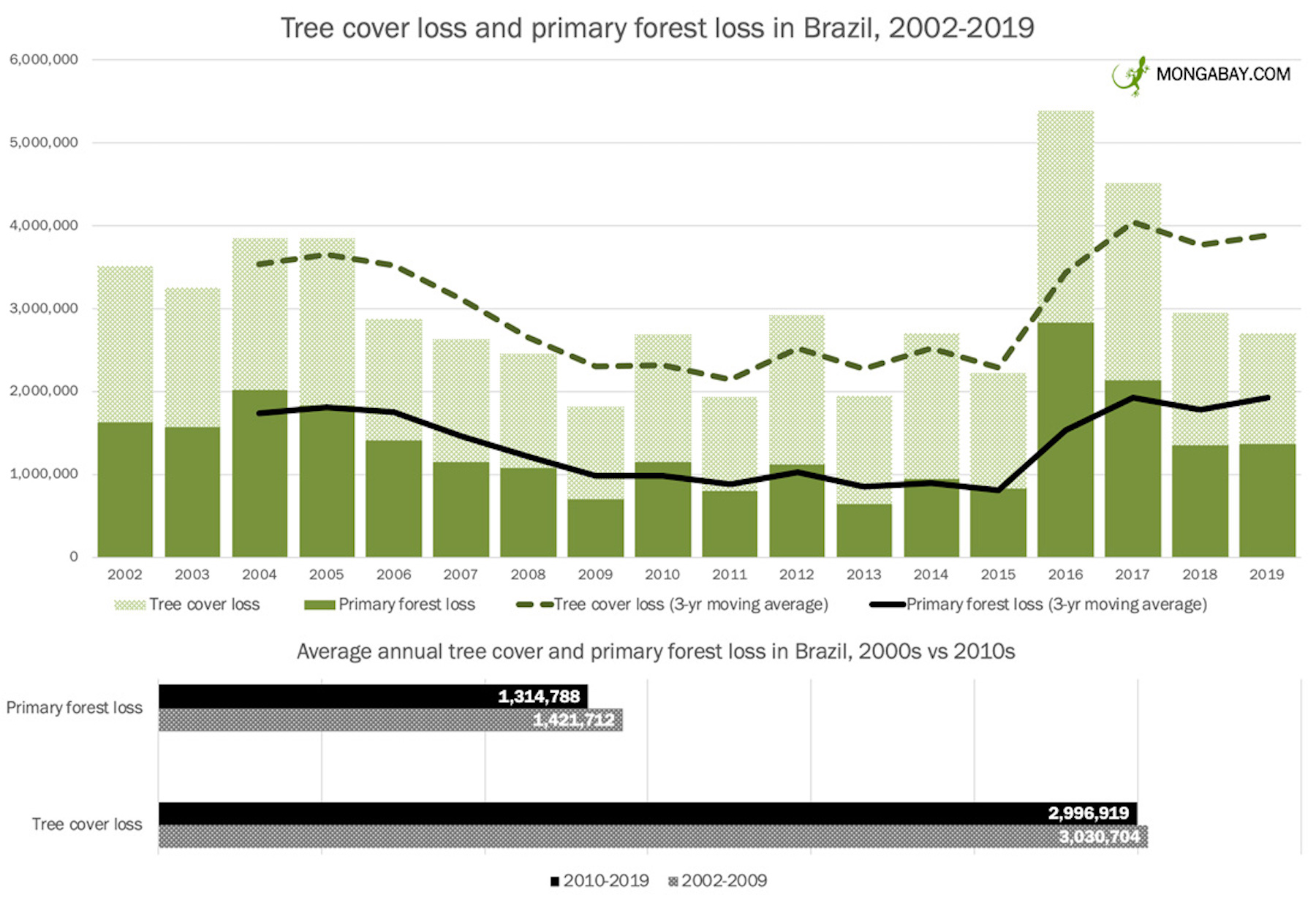 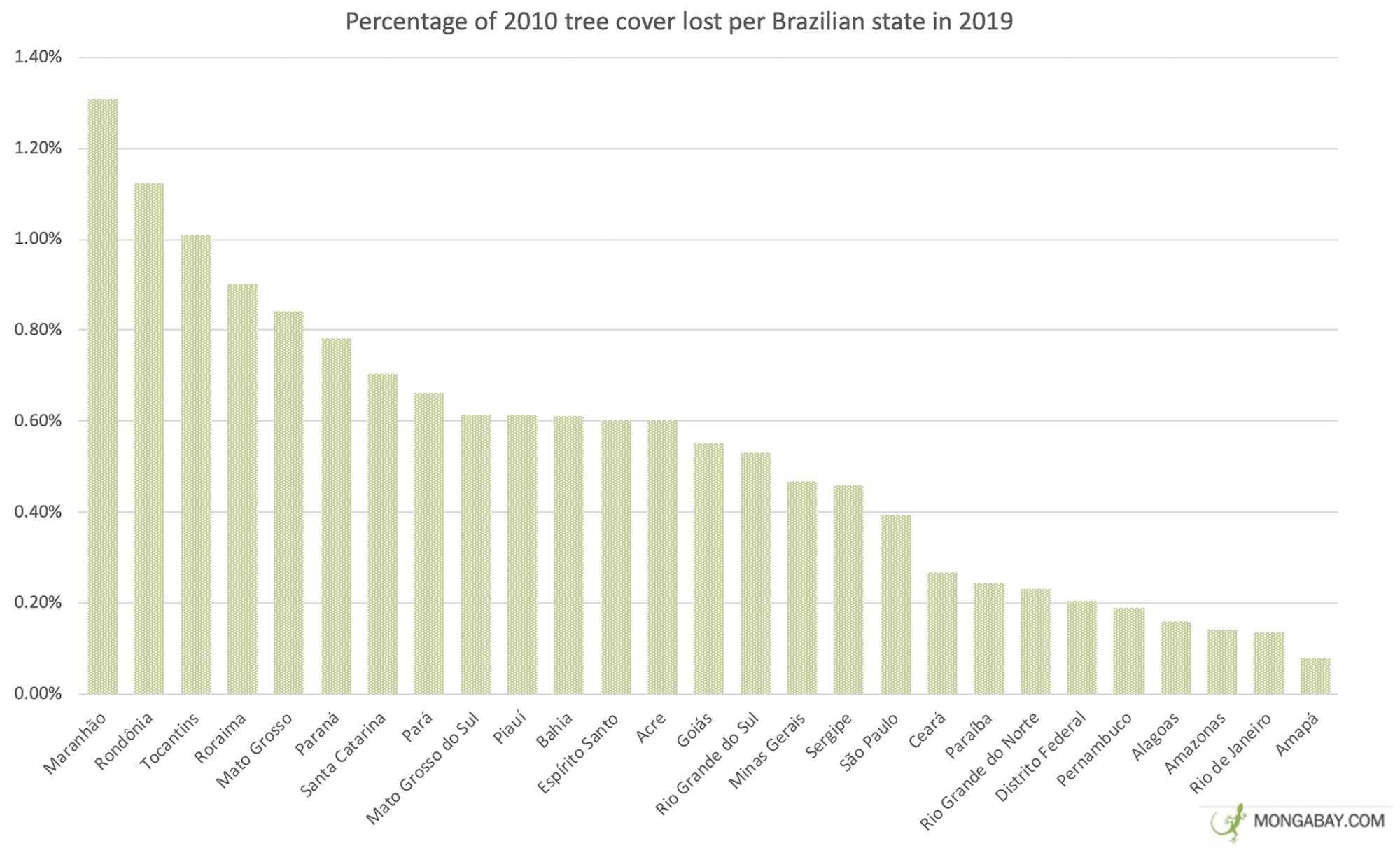 Drivers of deforestation in Brazil are many, with logging, mining, agribusiness and fires all taking huge tolls on the country’s forests. Sources on the ground say the rhetoric of Brazil’s far-right president Jair Bolsonaro is fanning the flames and encouraging loggers, ranchers and miners to invade forests – including those in protected areas. Researchers are concerned that forest loss will rise in 2020 as fires set to prepare land cleared in 2019 for agriculture spread into nearby forest.

Next up is the Democratic Republic of the Congo (DRC), which lost 4,750 sq km of primary forest in 2019 and 12,000 sq km of general tree cover last year. While both overall tree cover loss and primary forest loss declined somewhat between 2018 and 2019, numbers are still hovering around the high-water mark set in 2016-2017. 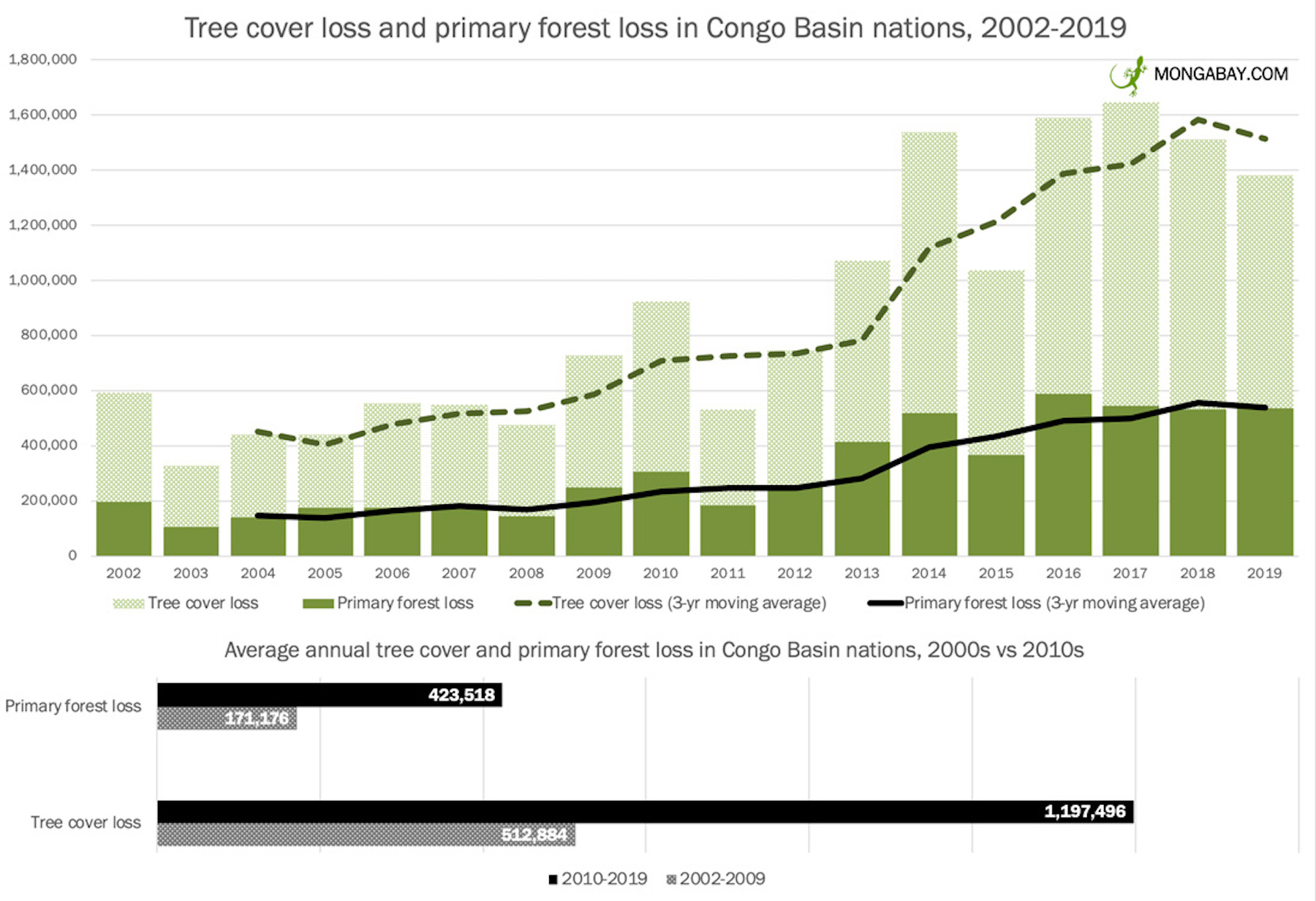 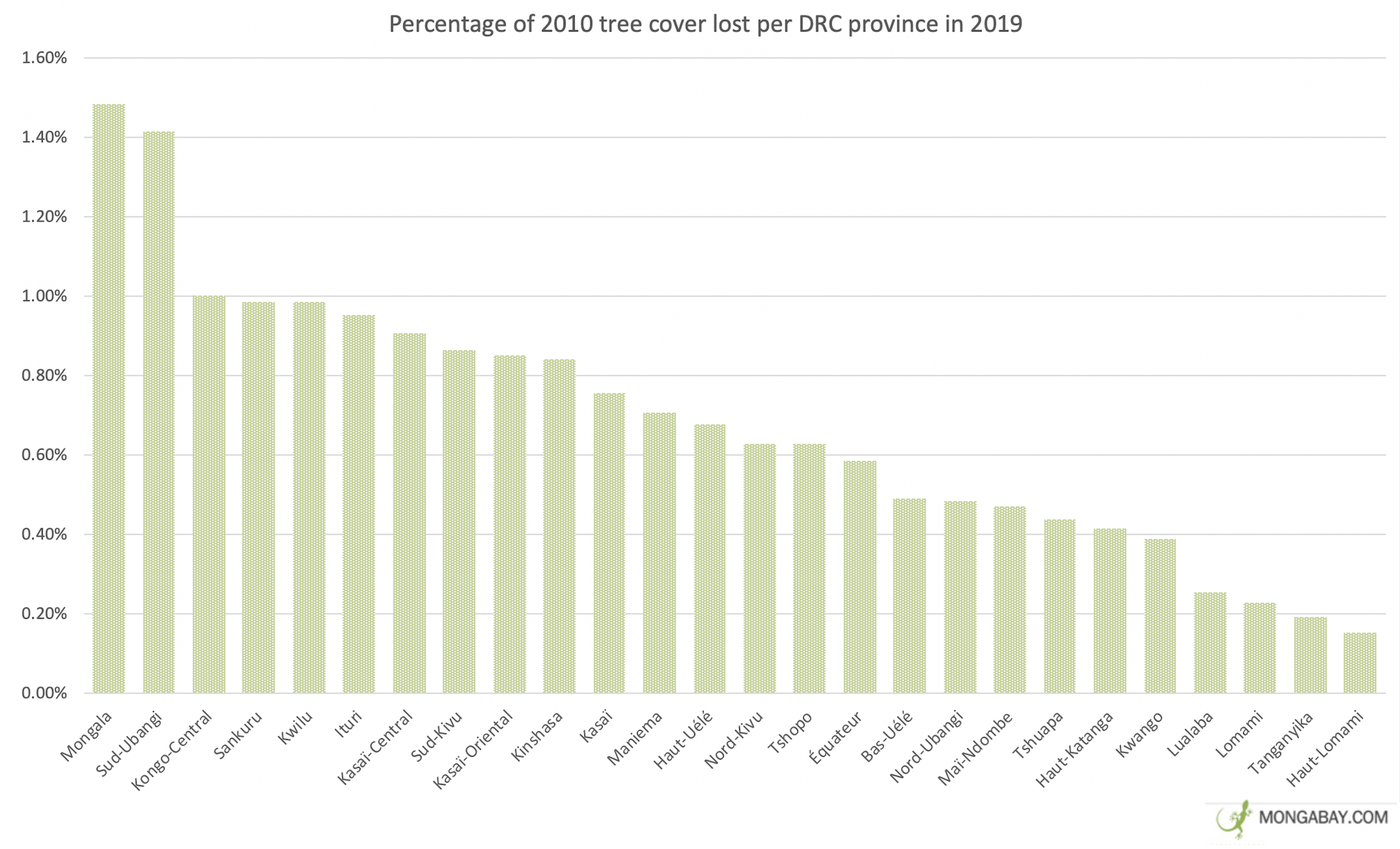 Bolivia had a banner year for deforestation in 2019, losing more forest since UMD began collecting data in 2001. Overall, the country lost 1.3% of its tree cover last year as record-breaking wildfires spread out of control in the latter half of the year. The fires were felt particularly acutely in the Chiquitania dry forests of the department of Santa Cruz, which lost nearly 3% of its tree cover in the space of a few months.

Officials attribute the fires to intentional burning to convert forest to farmland. Sources say this practice increased after former president Evo Morales signed a decree earlier in 2019 that expanded land for livestock production and the agribusiness sector. Despite the ousting of Morales in November, conservationists say it looks like Bolivia may be in for another heavy fire season in 2020. 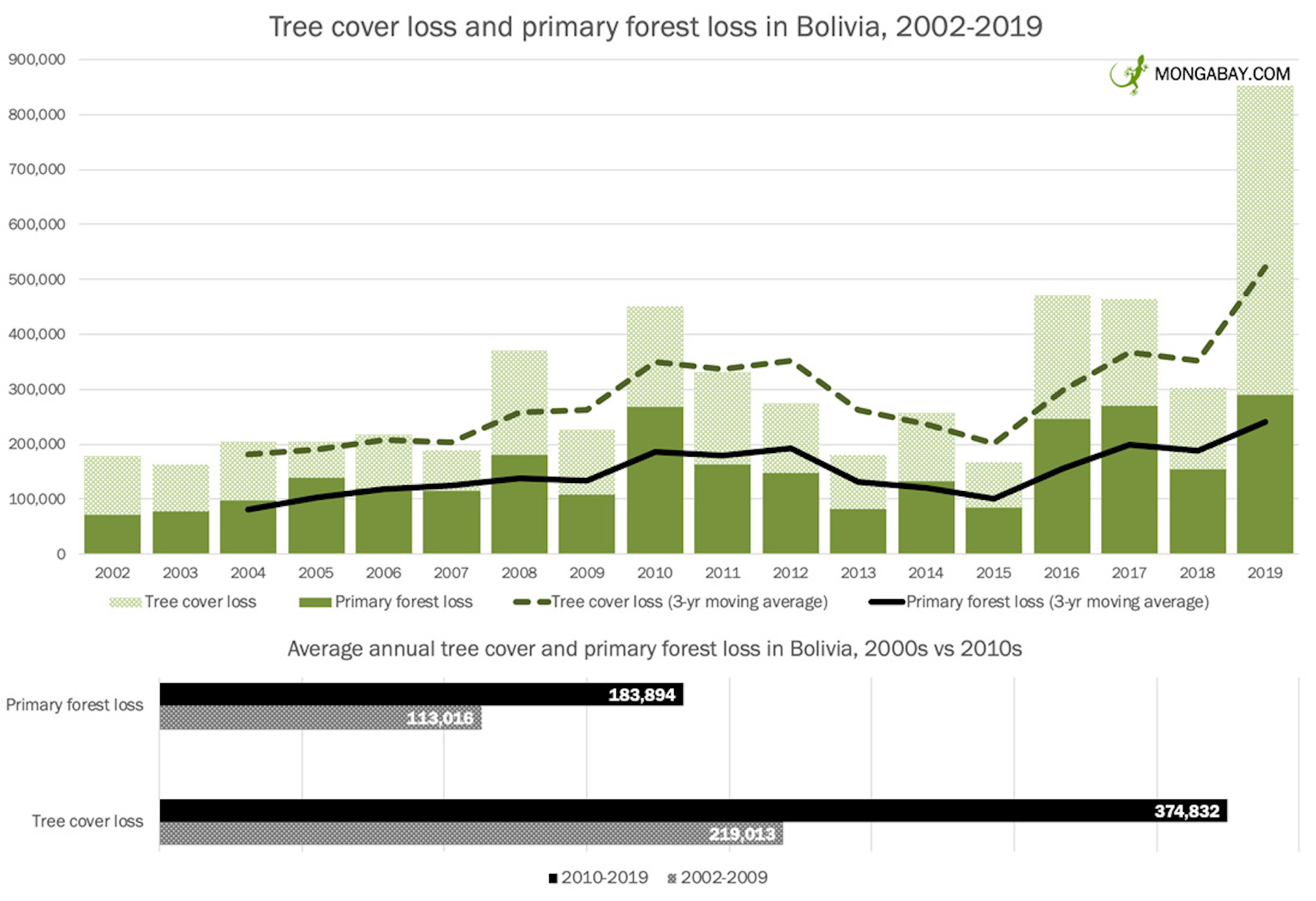 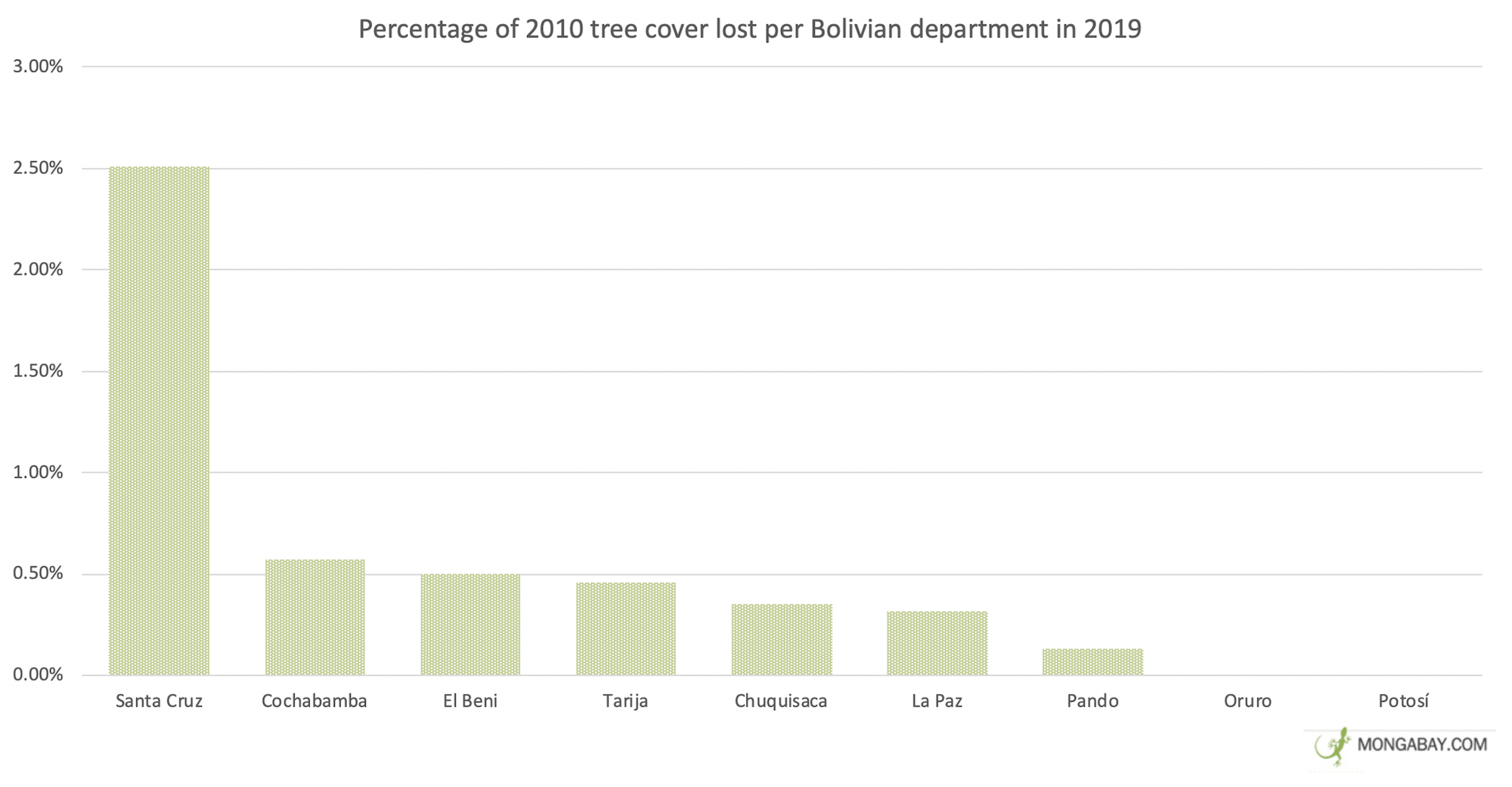 Another country that experienced record-breaking fires is Australia. Referred to as the “Black Summer,” the fire season of late 2019/early 2020 ravaged an estimated 186,000 sq km, killing at least 34 people and potentially more than a billion animals. Researchers say the fires damaged the habitat of 648 threatened species in Queensland alone.

Fire is not uncommon in many of Australia’s forests, and some of the country’s famed eucalypt tree species even depend on it to spread their seeds. But the scale and intensity of the 2019-2020 fire season was unprecedented, and affected ecosystems that are not so fire tolerant. 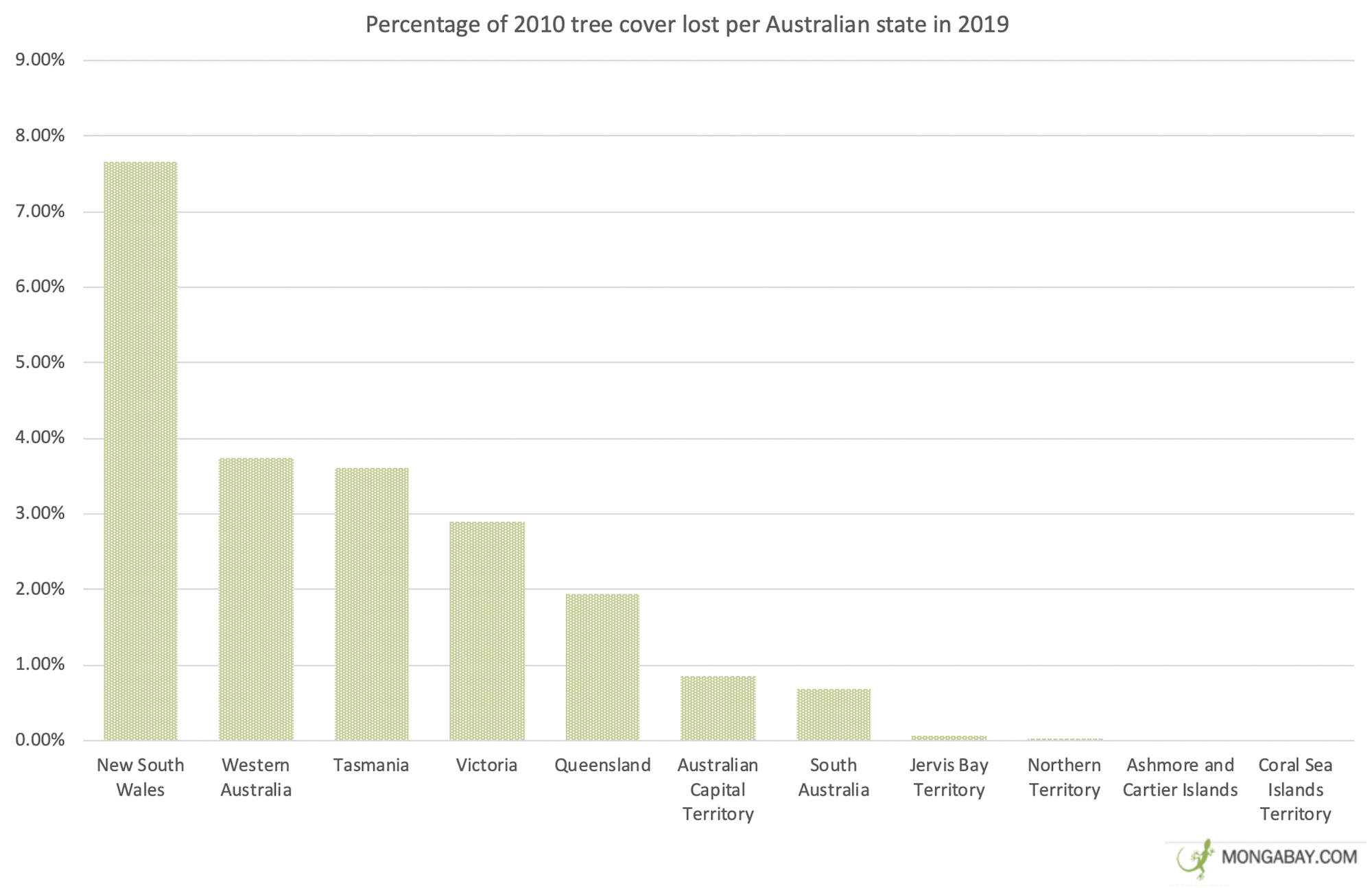 Researchers say climate change and poor forest management practices likely contributed to the severity of the fires. The Victoria state government recently announced it will ban logging in 2030, but researchers say allowing logging in the meantime will open up forests to future fires.

Once again, forest loss dropped in Indonesia, marking 2019 the third year in a row where deforestation declined. Primary forest loss in the country – while still ranking third in the world overall – took a particularly deep dive, hitting its lowest number since 2003.

Researchers attribute this downturn to successful forest protection policies enacted after the country’s unprecedented 2016 fire crisis. However, WRI analysts caution that clouds and haze may have obscured some deforestation events that happened in late 2019, which means that the actual level of forest loss may be higher. 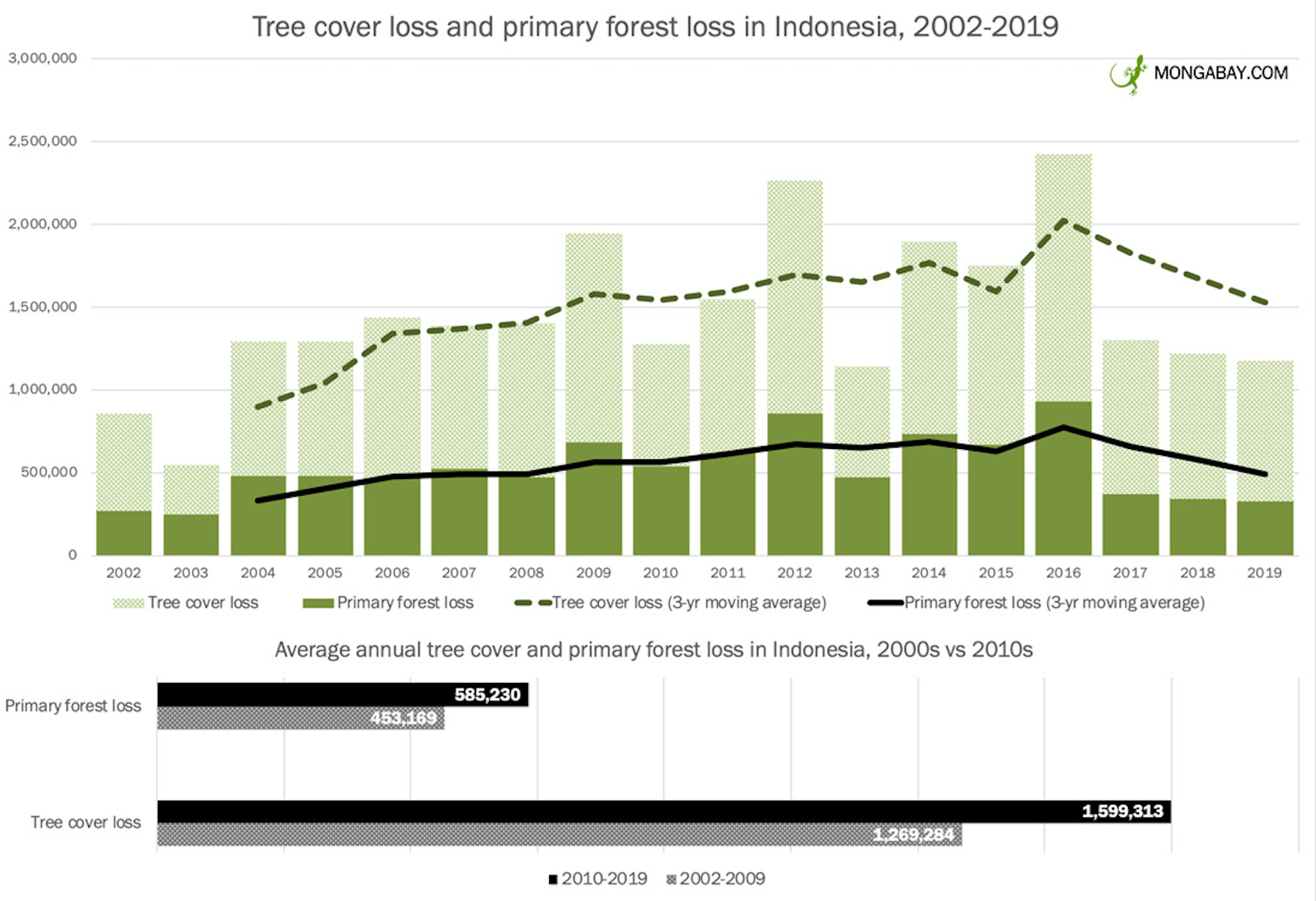 Over in West Africa, the data show primary forest loss dropped 50% in Ghana and Côte d’Ivoire in 2019 following a big uptick the previous year. WRI analysts say this drop is likely due to effective conservation initiatives and pledges by the countries and major chocolate companies to end deforestation.

Colombia showed its first reduction in primary forest loss in five years, which declined 35% from a 17-year high in 2018 and settled at the country’s lowest level since 2016. Researchers say Colombia’s rising deforestation rate over the past few years was fueled by the demobilization of the FARC rebel group, which allowed agribusiness to move into forested areas that were previously off limits. However, preliminary data for 2020 indicate deforestation in Colombia may again be on the rise, and sources report small farmers and armed groups are moving into national parks.

After having the dubious honor of proportionally losing the most forest cover in 2018, Madagascar appears to have bounced back. The data show the country reduced its primary forest loss rate by nearly half, settling at the lowest level since 2012. However, as with Indonesia, clouds may have obscured late-2019 deforestation events in some areas from being picked up by satellites.

“2020 was supposed to be the year we halved deforestation, but we’re going in the wrong direction,” said Frances Seymour, a Distinguished Senior Fellow at WRI and an expert in sustainable development.

In a blog post that accompanied the release of the 2019 data, Seymour points to three things that can have big impacts on deforestation reduction: legal recognition of indigenous land rights, effective law enforcement and support from international markets and financial institutions.

So if we know what works, why isn’t it working?

It all comes down to money, it seems. In a post written in 2018 in response to yet another year of high deforestation numbers, Seymour says cash crops like soy, palm oil and beef are given preferential land use, buoyed by policies encouraging the use of commodities for livestock feed and biofuels. Corrupt authorities turn blind eyes to illegal logging, with some government officials allegedly even directly involved in the illegal timber trade. Meanwhile, indigenous communities, which research shows are often the most effective forest stewards, are often unrecognized as owners of the land they’ve lived on for generations – and murdered when they stand up to encroachers.

“The situation reminds me of the many movies that feature a runaway train: The throttle of global demand for commodities has been engaged, and the brakes of law enforcement and indigenous stewardship have been disabled,” Seymour says in her post. “The only way to prevent a disastrous train wreck is for the hero (or heroine) to get into the conductor’s seat, remove the brick on the accelerator, and hit the emergency brakes.”

In order to hit the emergency brakes on the runaway train of deforestation, Seymour says emphasis must be placed on changing the incentives driving forest loss on a domestic, local level.

Seymour is also worried about how the COVID-19 pandemic and deforestation might play into each other. She warns that forest fires could worsen the condition of people affected by the virus whose lungs are more sensitive to smoke pollution and says governments shouldn’t relax forest protection as a way to recover financially from the pandemic. She also anticipates an increase in forest-dependent livelihoods as jobs are lost and urges the creation of “forest-friendly” jobs and temporary cash transfers.

“Consideration of forests in pandemic recovery efforts will determine if the tree cover loss numbers pivot up or down in the years to come,” Seymour said in her 2019 post. “Instead of actions that postpone overdue transitions to more resilient, low-carbon economies to avert the looming crisis of climate change, governments now have an opportunity to accelerate them.”

Banner image by Rhett A. Butler/Mongabay

Editor’s note: Mongabay has a funding partnership with the World Resources Institute (WRI). However, WRI has no editorial input on Mongabay content.