It’s too early for a verdict, but at present, threats to the Brazilian Amazon are growing virtually unchecked while the COVID-19 pandemic deepens. As the virus spreads, creating dramatic scenes in the rainforest, land grabbing is advancing and there is no sign of deforestation slowing. On the contrary: numbers skyrocketed during the first quarter of 2020.

The National Institute for Space Research (INPE) reported that 796 square kilometers (307 square miles) of forest were cut down during the first three months of this year. A third of the devastation happened on  including national forests and conservation areas, which in general have become targets for land grabbers eager for big profits. According to the Institute, reports of deforestation were up 51% between January and March as compared to 2019.

Aside from loss of forest, potentially dangerous drought is possible this year: in the first three months of 2020, the U.S. National Oceanic and Atmospheric administration (NOAA) noted that temperatures in the Amazon rainforest were far above the expected average for the season. NASA measurements also suggest that the groundwater in large areas of the Amazon is at lower levels than normal. In addition, the forest has had a drier rainy season than normal.

As a result of all these factors, researchers interviewed by Mongabay are expressing grave concern about the coming dry season and Amazon fire season. Beginning in May, the trees cut in previous months will need to be burned by land grabbers and others to clear the land. Illegal burning will then begin to spread, a process that normally begins in northern states like Roraima.

“What is frightening is that, even during the rainy season, we saw a big jump [in deforestation]. Those who occupy land and cut the forest have gotten clear signals to move ahead — either from the economic sector or the Brazilian government,” says Paulo Moutinho, one of the founders of IPAM (the Amazon Environmental Research Institute).

The dispute over land remains intense in the rainforest and is considered to have been the decisive factor during the most recent Amazon fire crisis in August 2019. In March alone, the Imazon research institute registered a 279% increase in deforestation reports as compared to the same month in 2019. INPE’s satellites identified nearly 200 square kilometers of deforestation (77 square miles) in the forest during the first half of April alone.

Recent data have pinpointed the current fronts of devastation along the border between southern Amazonas and northern Mato Grosso states and in southern Pará state — not unexpectedly, inside the so-called Amazon Deforestation Arc. This is where the municipalities of Apuí, Marcelândia and São Félix do Xingu lie, which have lost the most forest so far in 2020. And these are areas which are expected by experts to see major fires set in coming months.

Adding to the threat, “Roadways in these regions were recently paved, which facilitates shipping [of illegally cut timber] and there are large swaths of “grabbable” land, including vacant areas [of government common land] and indigenous reserves,” explains Paulo Barreto, senior researcher at Imazon. 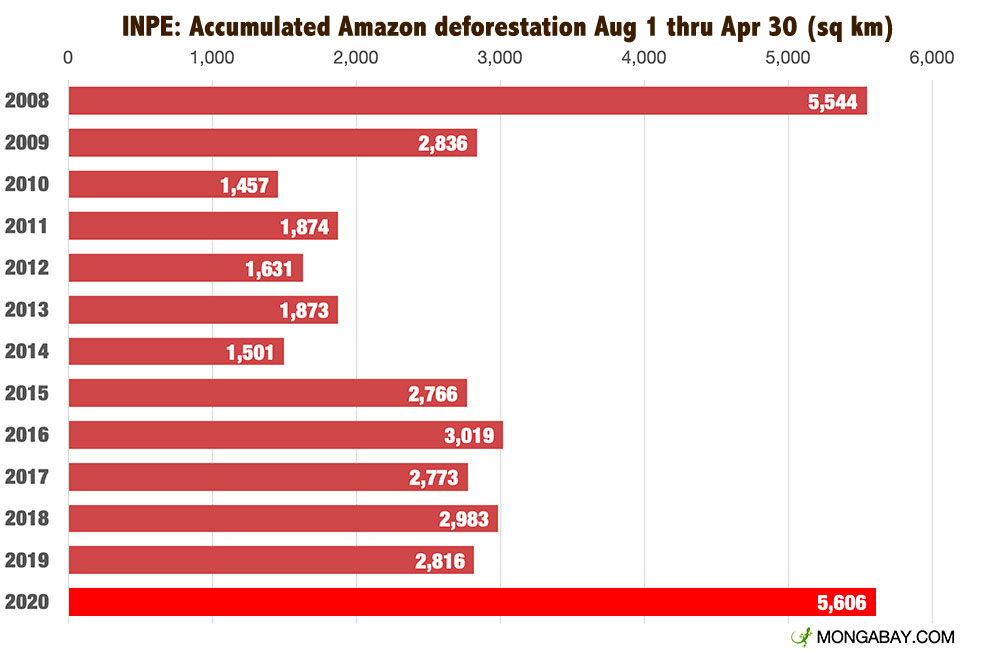 Repercussions against one Amazon surveillance and law enforcement action hit Brasília like a political firestorm during the first half of April. Teams from federal environmental watchdog IBAMA (the Brazilian Institute of Environment and Renewable Natural Resources) took action against hidden mining operations on lands belonging to the Apyterewa, Araweté and Trincheira-Bacajá indigenous peoples in upstate Pará. In accordance with the law, they destroyed machinery used for illegal mining in the reserves.

Raids like this one, where equipment used in illegal mining and logging operations is destroyed, fell by 51% during the first year of the Bolsonaro administration, as compared to the yearly average between 2014 and 2018. Footage presented on Brazilian television of the machinery in flames in Pará — and of a miner saying he had been motivated by the current administration — instantly led to a crisis.

Minister of the Environment Ricardo Salles fired IBAMA’s director of Environmental Protection, Olivaldi Azevedo a few days after the broadcast. Since then, there has been ongoing dispute between government career environmental agency employees (hired primarily base on their professional qualifications) and commissioned workers (hired via political recommendations). IBAMA is an agency which has undergone broad militarization of its staff since Jair Bolsonaro assumed the presidency.

Fifteen days following the TV broadcast, the political clashes led to the firing of two head surveillance officers, career agents who had been involved in the Pará operations and who were recognized for their aggressive past reductions of deforestation. “The firings made it obvious that we are under pressure to not do our jobs, to not police. This generates mistrust and much more work for the State as a whole,” said an IBAMA inspector who asked not to be named.

Deforestation due to illegal mining in Amazonia increased nearly 25% between 2018 and 2019 according to reports obtained by the newspaper O Globo. The most affected region lies in western Pará State, which has been the stage for other cooperative operations between IBAMA, ICMBio (which oversees Brazil’s national parks) and the Federal Police to debilitate illegal mining operations.

IBAMA’s policing abilities have been aggressively reduced by the Bolsonaro administration. Most recently the government delayed hiring of nearly 900 employees, many of which are field inspectors.

Moreover, according to the Ministry of Planning, 9% of IBAMA’s existing agents were in a high risk group for COVID-19 (aged 51 or over) as of March 2020, meaning that restrictions during the pandemic have increased for the agency. Operations are frequently carried out in remote regions with precarious health services, oftentimes within indigenous reserves, home to isolated communities, where the risk of spreading coronavirus could be high.

Despite this dangerous reality, says another official, “The government hasn’t defined norms for [field] surveillance during the pandemic and we feel unprotected. There are no PPE [Personal Protective Equipment] kits for the officers, who usually come from other parts of the country.”

IBAMA officials told Mongabay that officers should adhere to orientations from the Ministry of Health and that “each [state] superintendence has been instructed to provide PPEs for their inspection teams.” The agency official didn’t, however, say how many PPE kits are available.

Together with the Federal Court of Accounts, the Prosecutor’s Office alleges that problematic staffing issues at IBAMA have dragged on for years. The most recent public hiring process was held in 2014. Since that time, deforestation has increased and fines have decreased — there were 34% less in 2019 than in the previous year. Also, typically, many fines that are charged are never paid.

“We have effective methods for remote surveillance through satellite images, crossing them with property data. But it is not enough,” says one officer. “The only real way to find out who hired the [illegal] loggers, who rented the heavy machinery, who is really invested in the crime, is to go into the field,” he adds.

Making things worse, dangers and stress levels are increasing for agency officials sent into the field. In May, one IBAMA inspector was attacked by loggers near the municipality of Uruará, in Pará. The attacking crowd could not be contained even with the presence of the National Security Force during the rainforest operation. The municipality borders on the Cachoeira Seca Indigenous Reserve, which ranked third in deforestation between August 2018 and July 2019.

Rising aggression against environmental officials is spreading across the country. In São Paulo state, illegal miners attacked a team of officers in the Intervales State Park, located in the Vale do Ribeira — president Jair Bolsonaro’s home region. The ambush lasted for over 12 hours. During the attack, park ranger Luís Soares de Lima was shot in the leg and ranger Damião Cristino de Carvalho Júnior died from a shot to the head.

In 2019, a third of deforestation — and fires — occurred on illegally occupied land

Researchers believe the drive behind deforestation in the Amazon has changed little over the last six months. Not only are alerts from INPE increasing, but there are also many downed trees cut months ago waiting to be burned.

Adding to illegal deforestation incentives, in February, IBAMA loosened regulations on timber exports. According to IPAM, all these varied forces and events are coming together to create a favorable scenario for extensive wildfires like the ones seen in the second half of 2019.

IPAM, in a technical note released in April, analyzed last year’s fire crisis in the hopes of foreseeing the risks for this year’s cycle. Analyzing 2019 property data and the concentrations of the fires, the Institute identified land invasions as being causally significant: 30% of the 2019 fires occurred on illegally occupied land.

“In areas that are public… fires were motivated by deforestation [carried out] for illegal possession of the area by land grabbers for real estate speculation,” says the technical note. According to Paulo Moutinho, that pattern continues this year — as the increased deforestation in the first quarter of this year suggests.

IPAM state that between January and March 2020, 33% of all deforestation was carried out on public lands, while in 2019 that number was just 22%. “There is a high rate [of logging] on public lands, [especially in] forests not managed by the government. And more invasions [are likely to be] spurred by signals from the federal government that land grabbing will be legalized,” under Bolsonaro, says Moutinho.

“Those who finance deforestation pay dearly for it, something around R$1,000 per hectare [US$80 per acre]. In their view, there is no doubt: what wasn’t turned to ashes last year has to be burned as soon as possible,” to profit, the researcher adds.

More blazes also mean more problems for the public health system. Last year’s fire crisis led to a spike in hospitalizations due to air pollution, especially of children, in the private and public sectors. An explosion of respiratory cases and complications across the continent is even possible: in 2019, smoke from the fires turned day into night in São Paulo city in Southeast Brazil, and covered half of Argentina and Uruguay.

That’s very bad news: the public health system is currently collapsing in states like Amapá, Amazonas and Pará due to the growing number of COVID-19 cases. There are neither enough hospital beds for people with respiratory problems, nor enough equipment such as respirators.

A big fire season this year, combined with the spread of Coronavirus, is generating tremendous concern among experts for the elderly and those with chronic illnesses, such as those suffering from asthma and other inflammatory syndromes.

“Forecasts are for less rain and higher temperatures in Acre and southern Amazonas [in 2020]. More fires will lead to more cases of smoke poisoning. It’s a recipe for disaster,” says Paulo Moutinho.

This story was first reported by Mongabay’s Brazil team and published here on our Brazil site on May 7, 2019.