“The Moxihatetea [uncontacted indigenous group] is vigilant and they want to keep away from the Whites. They don’t know who the gold panners (garimpeiros) are and they don’t want them to approach them. They flee deep into the forest to get away from them,” said Yanomami leader Davi Kopenawa during his address at the opening of the 43rd session of the United Nations Human Rights Council in Geneva on 2 March.

Wearing a traditional headdress and speaking in the Yanomami language, Kopenawa expressed deep concern for the future of the Moxihatetea, an isolated indigenous group living within Yanomami Park, an indigenous reserve located in the very north of Brazil, near the frontier with Venezuela, and covering 9,664,975 hectares (37,317 square miles).

“The gold panners began to steal their food — their cassava, their bananas, their sugar cane. … The Moxihatetea attacked them with bows and arrows, but the gold panners, more violent, reacted firing at them with their shotguns,” Kopenawa told an international audience.

“The Moxihatetea fled higher up the river, but there are gold panners there too, by the Catrimani River. The Indians are surrounded. I don’t know them personally. I’ve only seen their huts from the air. But I’m very worried. Soon they will be exterminated. There’s no doubt the gold panners will kill them with their shotguns and their illnesses, their malaria, their pneumonia. The Indians have no vaccines to protect them. They will all disappear.”

Incursions against the Moxihatetea escalated in 2017 when the Brazilian government’s indigenous agency, FUNAI, alleging a budget shortfall, shut down its guard post which helped protect the uncontacted tribe from illegal miners and other invaders. Responding to protests, FUNAI has promised to reopen the post later this year. But for the time being, the Moxihatetea remain exposed to incursions.

A side event held at the UN meeting on 3 March, focused solely on the plight of Brazil’s isolated indigenous groups — defined as Indians not in contact with, or having very infrequent contact with, modern society. Brazil has more groups of isolated Indians than any other Latin American nation: authorities have confirmed reports of signs for 115 such groups. Of these, the existence of 29 groups has been confirmed; 86 are being investigated.

Antônio Oviedo, a representative from Socioenvironmental Institute (ISA), a Brazilian NGO, who spoke at the side event, explained that FUNAI decided 33 years ago that it was best for these groups if the authorities continued to accept their desire to remain isolated — a policy widely considered as very successful.

But, now under President Jair Bolsonaro, FUNAI is abruptly changing this policy, without consulting indigenous peoples. This about-face was underlined by the recent appointment of Ricardo Lopes Dias, an evangelical missionary, to head FUNAI’s uncontacted Indians unit.

According to Fiona Watson, from Survival International, an NGO that works with indigenous people globally, “Ricardo Lopes Dias is linked to the New Tribes Mission, one of the world’s most extreme evangelical organizations, which makes no secret of its objective to contact and convert uncontacted tribes whether they like it or not. Brazil’s landmark policy, which prohibits forcing contact with uncontacted indigenous people, risks being overturned. The consequences will be catastrophic as these vulnerable peoples have no immunity to common diseases like flu and measles — any contact could wipe them out entirely.”

Upon his appointment, Lopes Dias denied having plans to convert uncontacted groups to Christianity: “I will not promote the evangelization of indigenous people,” he said.

Accusations of unfolding ethnocide and genocide

Brazilian human rights organizations are profoundly worried about the harm the Bolsonaro government is doing to indigenous communities in general, and isolated groups in particular. Laura Greenhalgh, executive director of the Arns Commission, a human rights body, who spoke at the side event, reported her organization’s plan to send a petition to the International Criminal Court demanding an investigation into Bolsonaro’s attacks on indigenous human rights protections.

Greenhalgh’s organization asserts that the Bolsonaro administration’s socio-environmental policies are putting indigenous peoples at risk of “ethnocide,” defined as “the deliberate and systematic destruction of the culture of an ethnic group,” while also putting isolated groups at risk of “genocide,” defined as “the deliberate killing of a large group of people, especially those of a particular nation or ethnic group.”

A strongly-worded report, released jointly at the side event by ISA, a human rights body, along with the Arns Commission and another NGO, Conectas–Human Rights, offered evidence for these charges: The report lambasts the current administration, saying that “Since the Bolsonaro government’s very first day in office [January 1, 2019], its decisions have fragmented the country’s environmental policies and have led to an increase in the deforestation of public land and, thus, to the violation of the rights of indigenous peoples.”

The report argues that indigenous communities are being aggressively targeted: “Of all the institutions affected by the government’s endeavors to weaken environmental policies, FUNAI, the official indigenous body, is in the worst situation,” it states. FUNAI was already stretched to the breaking point before Bolsonaro took office, the report states, and was ill-prepared to suffer further blows, including a devastating 90% funding cut. The document concludes that “This extremely serious budget cut, along with massive changes in the way the body is structured, has meant that its activities have come to a virtual standstill.”

The result has been an alarming increase in deforestation on indigenous lands, reversing the downward trend recorded between 2004 and 2014. Deforestation in 115 of the worst-affected indigenous territories totalled 42,679 hectares (105,462 acres) from August 2018 to July 2019, an 80% increase compared with 2017-18. Long lauded as “guardians of the forest” for their success in curbing deforestation within their territories, indigenous groups are finding it increasingly difficult to defend their lands because, they say, invaders have the backing of authorities. 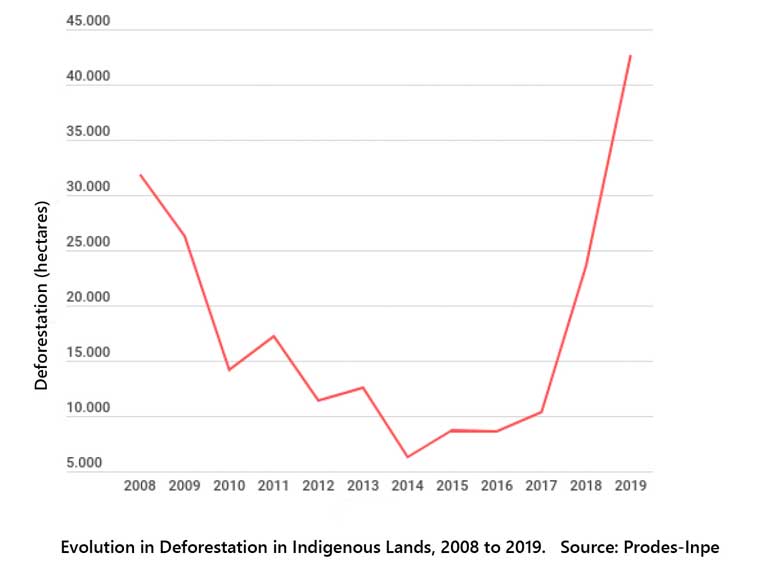 Isolated indigenous groups in the balance

This surge in deforestation within indigenous reserves, puts isolated groups especially at risk. Of the 54 indigenous territories where uncontacted Indians have been detected, 21,028 hectares (51,961 acres) of forest were felled in 2019, an increase of 114% compared with 2018 and of 363% compared with 2017.

Two Amazonian indigenous reserves where isolated groups suffered particularly badly last year are Yanomami Park, which saw deforestation soar by 1,686% between 2018-19, and the Ituná/Itatá Reserve in Pará state, which saw an increase of 656%.

Both territories are being aggressively eyed by outsiders. According to the report, 536 requests for mining rights have been made to the government to explore the huge mineral wealth thought to lie beneath the Yanomami territory; requests covering more than half the reserve. Land grabbers believe the land within the Ituná/Itatá Indigenous Reserve will increase greatly in value as the region is opened up to farming. Bolsonaro is pushing a bill through Congress that, if passed, will open indigenous reserves to mining and agribusiness.

Worse may lie ahead. A simulation quoted in the report shows that if the current surge in deforestation continues through 2039, then areas where isolated Indians now live — 78 protected areas (54 indigenous territories and 24 conservation units) and eight unprotected areas — will lose 6,030,376 hectares (23,283 square miles) of forest. The simulation suggests that in the worst-case scenario, all forest will disappear in some protected areas by 2039, while others will lose well over half — leading to the “genocide” of isolated indigenous groups.

Mongabay contacted FUNAI and Brazil’s environment ministry for comment on the report and on Davi Kopenawa’s address, but received no reply. However, Brazil’s ambassador to the UN, Maria Nazareth Farani Azevedo, spoke briefly to the press at the opening of the UN Human Rights Council. She drew attention to “falsehoods” that are being alleged against Brazil, saying that “corrections” are needed. She also echoed a talking point frequently repeated by other Brazilian officials, saying that the total area of indigenous territories and protected areas in Brazil is larger than various European countries combined — lands set aside for a small minority of the nation’s people, and from which few Brazilians benefit economically.

Davi Kopenawa countered that argument: “The Whites cannot destroy our house for, if they do, things will not end well for the whole world. We are looking after the forest for everyone, not just for the Yanomami and the isolated peoples. We work with our shamans who understand these things well, who possess wisdom that comes from contact with the land.”

Top scientists recently warned that a critical deforestation and climate change-driven tipping point has been reached in the Amazon. If significantly more forest is cut, they said, heightened drought could turn the rainforest into a degraded savanna, destroying Brazil’s agribusiness economy, releasing vast amounts of stored forest carbon into the atmosphere, and, when combined with other factors, triggering catastrophic planetary global warming.