Brazil knows how to fight Amazon deforestation: Monitoring and law enforcement must be strengthened (commentary)

Commentary by Juliano Assunção and Clarissa Gandour on 30 December 2019

As the COP25 climate conference in Madrid, Spain came to a close with little progress earlier this month, the future of the Brazilian Amazon remained dangerously unclear. The Amazon is a vital environmental asset for Brazil and the world. At roughly half the size of continental Europe, it serves as a major carbon sink and thus plays a central role in the global effort to fight climate change. A healthy Amazon is also key to ensuring livelihoods, conserving biodiversity and protecting water resources.

These natural resources, in turn, maintain the biophysical conditions needed to sustain Brazil’s thriving agricultural industry. Moreover, given Brazil’s unique capacity to balance environmental conservation and agricultural production, protecting the Amazon also serves as a strategy for moving the country towards a position of leadership in international commodity markets.

Yet, the Brazilian Amazon is currently under threat. Data from 2019 suggest forest clearing has accelerated sharply over the past few months. Recent news coverage showing alarming images of fires raging across vast forest areas may have led many to think Brazil lacks sufficient policy tools to control Amazon deforestation — but this conclusion is a mistake.

The country holds unique expertise in using policy to fight tropical clearings, primarily due to the implementation of an action plan in the early 2000s. The action plan proposed novel policy measures that helped reduce deforestation rates by more than 80% over the course of a decade.

Despite its initial success, fifteen years after the plan’s inauguration, Brazil finds itself at a crossroads: the Brazilian federal government currently plans to cut back on resources that support environmental enforcement. These cuts will likely lead to escalating deforestation. The 50% reduction in the budget for environmental monitoring and law enforcement originally proposed for 2020 could increase Amazon deforestation by an estimated 45%.

Brazil must act quickly and decisively to prevent this from happening. Drawing on what Brazil has learned from the past would allow the government to strengthen Amazon conservation today. This commentary offers evidence-based policy recommendations that can move Brazil in this direction.

Starting in 2004, through a combination of technological development and policy innovation, Brazil set up an innovative satellite-based monitoring system for targeting law enforcement action to fight Amazon forest clearing (see Figure 1, below). 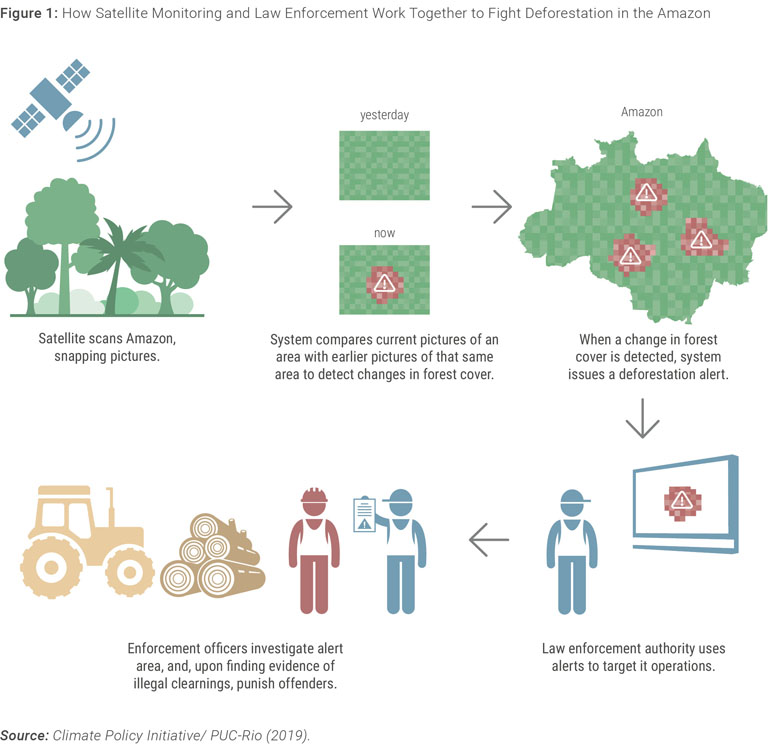 An analysis we conducted as researchers at Climate Policy Initiative/ PUC-Rio (CPI/PUC-Rio) indicates that this system works. We found that these monitoring and law enforcement efforts avoided the clearing of an average of 27,000 square kilometers (or 10,400 square miles) — nearly 4 million soccer fields — of Amazon forest per year from 2007 through 2016.

This translates into avoided emissions of nearly 1 billion tonnes of carbon dioxide (tCO2) per year (based on the 2011 Brazilian Ministry of the Environment Amazon-specific conversion factor of 36,700 tCO2 per square kilometer). This is equivalent to about half of Brazil’s total emissions in 2017, but it is certainly an underestimate of the benefits of protecting the forest, as it only focuses on emissions (see Figure 2, below).

In addition, we compared the estimated costs and benefits of the monitoring and law enforcement strategy and concluded the strategy did not impose a high cost burden. About half of emissions now covered by carbon pricing initiatives worldwide are priced at over $10/tCO2e, which is well above the break-even price calculated for avoided Amazon emissions. Moreover, results indicate that combating Amazon deforestation did not jeopardize local agricultural outcomes. Therefore, the benefits of protecting the forest more than compensate for the costs of implementing the Amazon monitoring and enforcement strategy.

Brazil’s use of satellite technology to monitor Amazon forest loss and target law enforcement efforts has been instrumental in reducing deforestation and protecting tropical forests. Although technological development is an essential part of this strategy, none of it is possible without governmental buy-in and support.

The Brazilian federal government plays a central role in directing and supporting monitoring and law enforcement efforts. To achieve continued progress in the reduction of Amazon deforestation, Brazil must:

• Resume and strengthen the federal government’s institutional and financial support for monitoring and law enforcement action;

With countries failing to make significant progress at COP25, Brazil has a remarkable opportunity to resume the lead in the global effort to fight climate change. Committing to strengthening its environmental monitoring and law enforcement strategy is a necessary first step. The benefits of doing so — for Brazil and the world — far outweigh the costs.