The large-scale expansion of oil palm has been a major driver of deforestation and biodiversity loss in many areas of the tropics. In Malaysia and Indonesia, where 85 percent of the world’s oil palm is cultivated, rampant industry growth over the past several decades has replaced rainforest with monoculture plantations, devastating wildlife in the process and leading Indonesia to issue bans on further expansion. But as demand for palm oil continues to rise, other countries are looking to pick up the slack.

Known as a mega-biodiverse country, Colombia claims 74 distinct natural ecosystems with a biodiversity rate second only to Brazil. The country occupies 0.22 percent of the earth’s surface area but it houses about 10 percent of the species currently known on the planet.

According to the Environment Vice Minister Carlos Alberto Botero López, Colombia boasts fertile soils, but 40 percent have been degraded. The degradation processes that most affect Colombian soils are erosion, urban constructions and infrastructure, pollution from toxic substances, organic matter loss, salinization and desertification.

Further, Colombia’s forests and natural ecosystems are disappearing at an accelerating rate as deforestation shot up following a historic 2016 peace deal with the country’s formerly largest rebel group, the FARC.

While Colombia and Southeast Asia face their own individual environmental challenges, activists and researchers are concerned that oil palm’s expansion in Colombia following the 2016 peace deal could cause degradation to sensitive ecosystems and biodiversity loss as has happened elsewhere.

A recent study by a team of researchers at the ETH Zurich of Switzerland and Pontificia Universidad Javeriana of Colombia attempted to quantify the impacts of oil palm on Colombia’s biodiversity by combining distribution maps of threatened species with the locations of current and projected oil palm plantations. They found that the impact of current plantations on threatened vertebrates was relatively low because a large portion of oil palm cultivation was developed on previously degraded cattle pastures. Their results were published recently in the journal Biological Conservation.

“Oil palm in Colombia has replaced pastures rather than forests, and this explains the minimal impact the crop has had on biodiversity,” said lead author Natalia Ocampo-Peñuela.

Ocampo-Peñuela and her colleagues say their findings can be used to direct palm oil expansion to areas that would have minimal impacts on threatened wildlife – as well as which areas to avoid. They highlight the Macarena Environmental Management Area as one of these latter regions. Located in a critical ecological transition corridor between the Colombian Amazon, Eastern Plains and Andes, the researchers write that palm oil development in Macarena would likely have a negative impact on many threatened species.

“Some areas highlighted as low conservation risk for threatened vertebrates are in natural savannas of the Orinoco region, which should also be protected from oil palm expansion given their ecological importance,” said Andres Etter, an expert on Colombian ecosystems and study coauthor.

These impacts aren’t felt only by mammals. A study published by Diana Tamaris at Colombia’s Universidad Nacional showed that bird diversity was 90 percent lower in oil palm plantations in eastern Colombia than in nearby forests.

The world’s leading wild cat conservation organization Panthera has also looked into the effects of oil palm on the jaguar’s passage through Colombia. One of Panthera’s goals is an international effort to conserve forests and ecosystems within the jaguar corridor to preserve the wide-ranging species’ gene flow between continents.

Esteban Payan, regional director for Panthera’s northern South America operations, became interested in oil palm’s effect on jaguars when he noticed that animals were passing through Magdalena Medio, a region that connects the Darien Gap and Central America to the savannahs and Amazon rainforest. Magdalena Medio is also the secondest most important region for oil palm cultivation.

Using high-density camera traps, Payan’s team found that jaguars do use oil palm plantations as hunting grounds, but they won’t settle in it.

“Jaguars do use oil palm, but they won’t live in it,” Payan said. “For the jaguars, oil palm is more like an auxiliary habitat than fully functional ecosystem.”

Payan also found that smaller plantations – which he defined as less than 2,000 hectares – were more conducive to jaguar sightings. Further, heavily mechanized operations where noise and disturbance can last for 24 hours a day were much less likely to support jaguars than human-based harvesting methods.

“When it’s humans working, the animals hide when they show up at 6am, but then at 3pm there is a burst of activity when they leave,” Payan said. “Obviously, it’s not optimal that the jaguars must adapt to human workday, but at least there is limited symbiosis that way.” 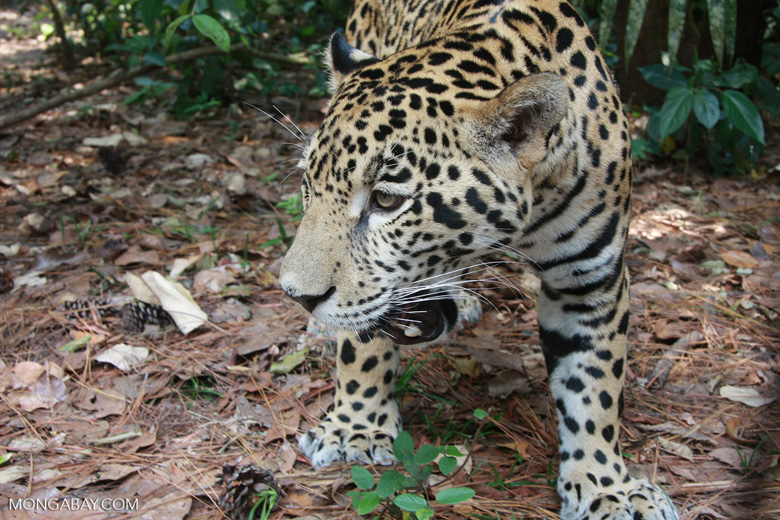 Rodrigo Bernal, one of Colombia’s leading palm researchers, is also concerned about the impacts of commercial oil palm cultivation on the genetic integrity of native palm species.

In a conversation with Mongabay, Bernal pointed to studies by investigators and the Humboldt Institute and the Sinchi Institute that showed the most common oil palm species is classified as invasive in northern South America.

Bernal explained there are two main species of oil palm: Elaeis guineensis from western Africa referred to as African oil palm, and E. oleifera from the Americas known as nolí palm.

Colombian palm growers have started crossing the two into a hybrid species known as OxG which is less susceptible against rot and disease, and Bernal said there are examples of the two species crossing spontaneously in the wild.

“As a recent report from the Ministry of the Environment points out, the few nolí palms that survive near the palm plantations have begun to spontaneously cross with their African cousins, producing hybrids between the two species in the Magdalena Medio region,” Bernal said.

Bernal said that in addition to the extinction threat the native oil palm faces from habitat loss, it now must confront “the loss of genetic diversity due to the crossing with the African species and the loss of identity.”

In addition, Bernal said the palm plantations generally carry parasites and pathogens that can spread to other palm species, causing problems for traditional food sources such as chontaduro palm (Bactris gasipaes) in the Pacific region, or moriche palms (Mauritia flexuosa) in the Amazon.

To expand oil palm responsibly, Bernal said that Colombia oil palm growers and government regulators must collaborate with independent researchers to conduct studies that “get to the bottom of the issue.”

“Once we clarify the dimensions of the problem, we can begin to work together to find solutions,” Bernal said.