PITEKELE, Sri Lanka — Visitors to the Sinharaja Man and Biosphere Reserve, Sri Lanka’s largest remaining primary rainforest, could easily miss the fact that adjoining the forest’s entrance is the old and thriving community of Pitekele. Yet on foot, it takes just a quick turn and a climb over a boulder or two to exit the UNESCO World Heritage Site and enter into this bucolic village landscape of fallow rice paddies, sprawling tea gardens, and homes surrounded by some of the most diverse, and biodiverse, gardens in the whole region.

Pitekele, Sinhalese for “the village outside the forest,” is located within the 3-kilometer-wide (1.9-mile) buffer zone on the northwestern side of Sinharaja, the last remaining example of a once extensive mature wet-zone rainforest containing species endemic to Sri Lanka, and is itself a prime example of applied agroforestry.

Villagers have a complex relationship with the protected area; while they fully support the conservation of the forest for its contribution to the local climate and clean water, conservation rules implemented after the reserve’s establishment in 1986 have curtailed their ability to use forest resources upon which they have depended for generations.

These restrictions have made the villagers’ “home gardens” — multi-story combinations of trees, shrubs, herbs and lianas planted around houses — increasingly important for their livelihoods and food security.

Shifting away from forest resources

Forest resources were once a central part of villagers’ livelihoods. Three decades ago, men and children in Pitekele would often go to the forest to gather valuable products for use at home and to sell.

Villagers tell of the many different plant species they would gather at different seasons. A favorite was wild cardamom (Elletaria ensal), known locally as enasal, used to flavor curries and sweets. A yellow vine called weniwelgetha (Coscinium fenestratum), which has recognized anti-tetanus properties and is now critically endangered, was prized as medicine for ailments as common as fevers and as rare as snakebites. On their way to tap fishtail palms (Caryota urens), known as kitul, whose sweet sap is used to make hard sugar and syrup, men would gather up nuts and resins from native dipterocarps (Shorea sp.) to eat and to sell.

Since the creation of the reserve, these activities are forbidden. Now, to tap palms within the forest, villagers are required to purchase permits. As a result, people rarely enter the forest; even village elders told Mongabay that they go maybe once a year.

“Before, we used to go to the forest to gather food, spices, medicine, to tap fishtail palms,” says Guneratne W.* “We used to sell resins and fruits we collected, and now we don’t, we sell areca nut, coconuts, or bananas that we have on our land when we need extra income. Now, we must grow what we want to eat or sell in our home gardens.”

Scholars believe home gardens in Sri Lanka are an ancient agroforestry system that has been practiced for more than 2,500 years. The age of tropical home gardens is less well understood, but Vijaykumara W.* knows his family has maintained a home garden in Pitekele for at least 200 years. “I am the fifth generation here,” he says, “this is my ancestral village.”

According to village elders like Vijaykumara, most of the home gardens in Pitekele were planted between 30 and 50 years ago, established by children when setting up their own households. Some home gardens, those of the older households, are more than 100 years old.

People here say that their home gardens have existed as far back as they can remember, even if the species mix has changed over time. Jayawira*, a tea planter and kitul tapper in Pitekele, remembers walking 6 kilometers (3.7 miles) from Weddagala, the closest town, carrying construction materials for his house on his back.

“In the past, there was no road … we would walk,” he recalls. “We had to grow everything we wanted because we couldn’t buy it, including medicine because we were far from the doctors and hospital. Now we have less than we used to in the home gardens because we don’t need to grow medicines anymore, we have the road and can go to the hospital.”

While no single home garden in the village is the same — each reflects the individual preferences of a family — all contain a mix of edible, medicinal and ornamental trees and plants. The most common trees in home gardens are the native kitul palms and two species which are ancient introductions: coconut palms (Cocos nucifera), including the famous king coconut (Cocos nucifera v. aurantiaca), and areca palms (Areca catechu), the nuts of which are sold for cash throughout the year.

“Here, we don’t buy fruits,” Niyentara G.* says as she hands me a 2-kilo (4.4-pound) bag of ambarella from her garden to make curry for dinner. “We eat from the garden as things come into season. But the animals eat the manioc and bananas, and we still need to buy things like vegetables in town.”

The road is a symbol of the villagers’ changing livelihoods. Two or three decades ago, sheets of freshly tapped and rolled rubber would be drying outdoors on clotheslines; people grew coffee and cinnamon as cash crops, sold forest products, tapped kitul and planted their own rice.

Around the same time as the establishment of Sinharaja, however, villagers began replacing their rubber and cinnamon plantations with tea plants and stopped growing rice altogether.

According to villagers, this shift began when the price of low-grown tea rose above rubber prices. Infrastructure, like the road and a daily truck sent to pick up villagers’ tea harvest, encouraged people to switch from rubber and cinnamon to tea. “We became busy with growing tea and picking the tea leaves,” Lakshi R.* explains, “We didn’t have time to grow rice, and with our income from tea, we can buy rice instead.”

Even as higher incomes enable families to purchase rice from the market, villagers say that as food prices increase home gardens are vital in supplying their households with food staples like peppers, coconuts, spices, and fruits and vegetables. Ashoka W.*, who started his tea plantation in Pitekele about 10 years ago, told Mongabay, “Our lives depend on the price of tea. If it goes down, so does our quality of life.”

Growing their own food in home gardens ensures that even if the price of tea decreases, villagers in Pitekele are food secure. The same study by Geiger et al. found that an equal amount of Pitekele’s land area is in tea cultivation as in home gardens.

Recognizing this, the Sri Lankan government has encouraged the establishment of home gardens through its rural development and agricultural policies. In 2011, the Sri Lankan Department of Livelihoods (Divi Neguma, later consolidated into the poverty alleviation program known as Samurdhi) launched an initiative to foster the establishment of more than 1 million home gardens. Annual targets continue to extend this number; in 2016, the Ministry of Agriculture aimed to create 500,000 additional home gardens throughout Sri Lanka.

In a country where deforestation has decreased its original forest area by half since 1956, home gardens like those in Pitekele are crucial to maintaining forest cover and ecosystem services. A report by the Food and Agriculture Organization in 2009 found home gardens compose nearly 15 percent of Sri Lanka’s land area and 33 percent of its total forest area.

“These are tree-based systems that store large amounts of carbon in both above-ground biomass and in soils,” says James Roshetko, an expert on agroforestry in Southeast Asia at the World Agroforestry Centre. Along with carbon storage, home gardens boost resilience to climate change: “The diversity of home gardens helps farmers eliminate the risk associated with changing climate conditions.”

Mangala De Zoysa, a professor of agricultural economics at the University of Ruhuna in Sri Lanka, notes that even as home gardens themselves sequester carbon, they reduce the risk of deforestation and degradation of carbon-sequestering forests like Sinharaja.

Sixty percent of Sri Lanka’s timber is supplied by home gardens, he says. “People get their fuelwood and firewood from their gardens, which helps to protect natural forests.”

Along with reducing pressure on forest resources, contributing to villagers’ food security and livelihoods, and maintaining forest cover in the buffer zone of Sinharaja, the tropical home gardens of Pitekele support biodiversity conservation in the region by providing a habitat for important fauna, many of which are endemic species.

“Home gardens provide excellent habitat for pollinators like insects and birds,” Roshetko says. “And at the same time their diversity helps farmers to keep out pests and disease.”

Talking with villagers about the birds and animals they witness commonly within their gardens, they mention just a few of the many species they see.

One family often spies the endemic Sri Lankan gray hornbill (Ocyceros gingalensis) eating papaya from a tree in their garden. Villagers put out rice to feed the birds, and the Sri Lankan jungle fowl (Gallus lafayetii) can be seen in many home gardens as a result. Other commonly seen and heard birds are the pied cuckoo (Clamator jacobinus), the brown-headed barbet (Megalaima zeylanica), the Sri Lanka blue magpie (Urocissa ornata), and the rarer Ceylon frogmouth (Batrachostomus moniliger). 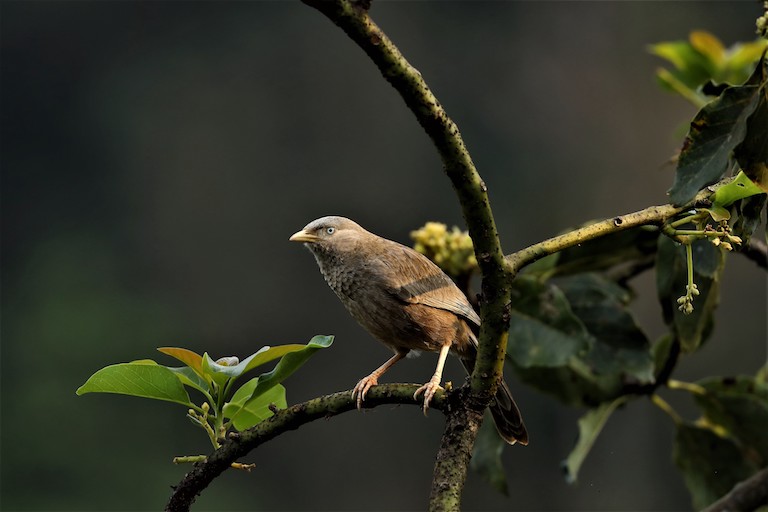 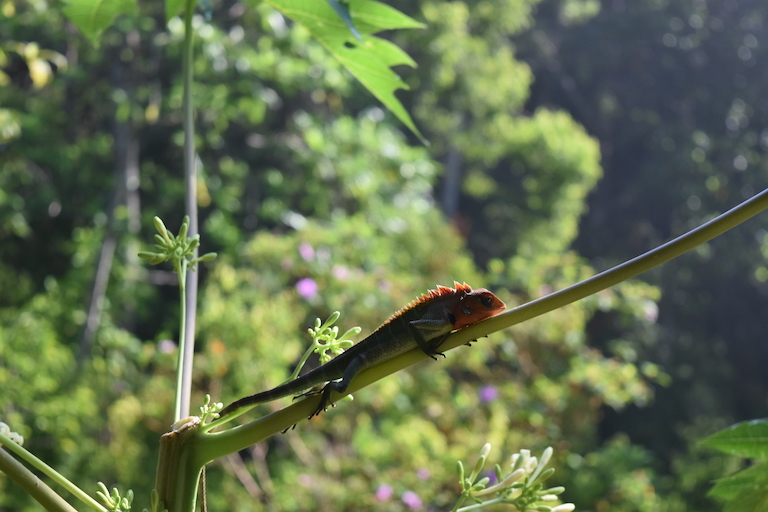 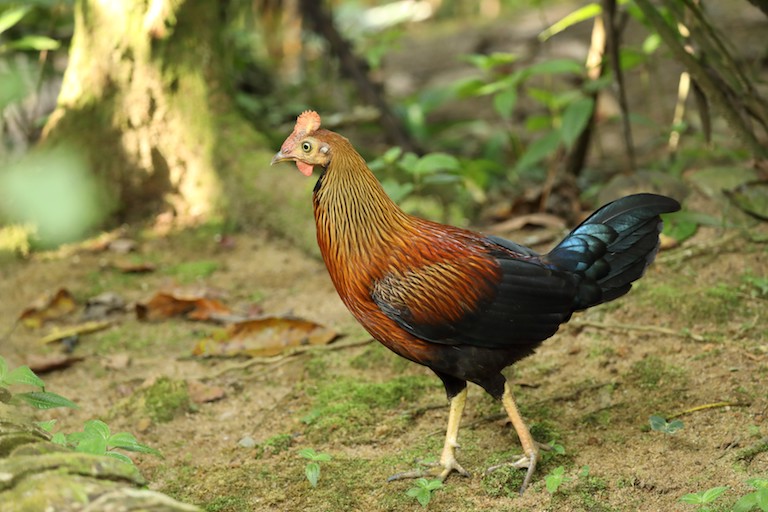 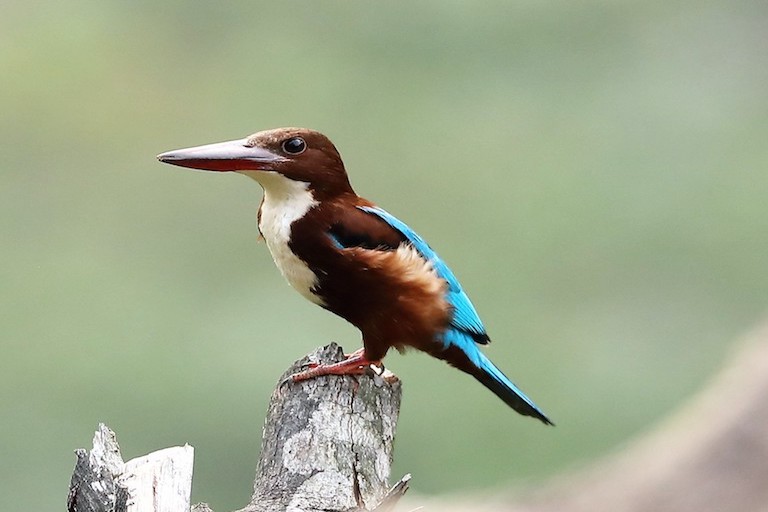 Walking on Pitekele road, a troop of southern purple-faced langurs (Trachypithecus vetulus vetulus), an endangered endemic primate species, can be heard hooting and twittering in the gardens and secondary forest as they leap between the trees whose leaves and fruits they eat. Villagers complain about the Sambar deer (Rusa unicolor) and wild boars (Sus scrofa) that frequent the village and eat vegetables from their gardens.

The trees and plants of Pitekele’s gardens are also home to common reptiles like the water monitor (Varanus salvator) and the green garden lizard (Calotes calotes), which are also often spotted rustling through tea plantations, plus a wide variety of snake species and a number of endemic snail and insect species.

Home gardens help to ensure the continued survival of these species by providing habitat and nutrition within the buffer zone rather than giving way to land uses that might isolate, strand or encroach upon protected areas like the Sinharaja Forest Reserve.

The tropical home gardens of Pitekele have allowed the villagers to adapt to change created by the interplay between conservation and livelihoods. This agroforestry system has evolved from one generation to the next alongside changing economic, cultural and ecological needs.

“Without our home gardens, we would feel that we didn’t have a house,” Simon R.* says. “Not only is the home garden important for our lives but also our culture as a traditional village. When we grew rice, the culture of sharing food with neighbors was strong. Now, it is only because of the home gardens that we keep up the closeness of villagers who give each other fruits and spices from their land and maintain our relationships.”

The benefits of home gardens extend from village life to Sri Lanka as a whole. Sri Lanka’s commitment to protecting endangered species and resilience to climate change depends on this important agroforestry system continuing as a widespread land-use option in this biodiversity hotspot and island nation.

“While [policymakers] are still discussing policies to support home gardens, nothing has been finalized,” says De Zoysa. “What Sri Lanka needs now are institutions responsible for the role that agroforestry plays in conservation and climate change.”

* Pitekele residents interviewed for this story in Mongabay’s ongoing series about global agroforestry asked to remain anonymous to protect their privacy.

FEEDBACK: Use this form to send a message to the author of this post.