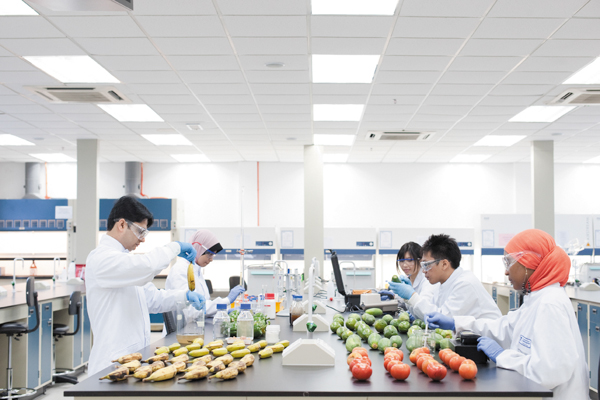 Researchers at the Center of Excellence for Post-harvest Biotechnology (CEPB) in Malaysia test a preservative coating made out of gum arabic that they hope will help reduce food waste in developing nations. Photo by: CEPB.

In sub-Saharan Africa, for every tomato or cassava eaten, one spoils. Up to half of all fruits and vegetables are wasted before they make it to a plate. Lack of refrigeration or stable electricity, as well as long and unpredictable supply chains, make it difficult to keep food fresh. But a new food coating that relies on gum arabic, a regionally produced tree sap, might help solve the problem.

Concern about post-harvest waste — food that goes bad between the time it’s harvested and when it’s sold — is an issue not only in Africa, but in many places where farmers work small plots. That’s why food scientist Ali Asgar researches practical ways to preserve produce. For the last two years, Asgar has worked to design a solution at the Center of Excellence for Post-harvest Biotechnology at the University of Nottingham’s Malaysia campus. The resulting safe, permeable coating keeps tomatoes fresh for up to 20 days, even at temperatures of 68 degrees Fahrenheit.

Coating food in a preservative layer isn’t new. In developed countries, fruits like apples are often sold layered in wax for similar reasons. But Asgar’s edible gum arabic solution costs just a few cents per kilogram, has no taste, and can be used on a variety of fruits and vegetables. Gum arabic is not only cheaper than wax, it’s also biodegradable.

The FDA considers the substance “Generally Recognized as Safe,” and has approved a variety of uses for the sap in food since 1977. But they have yet to assess it as a preservative, because until now, no one had thought to use it that way. Asgar said that when he started working on the project in 2013, “I was wondering why no one had done this before.”

His results have inspired additional research. Jun Acedo, a postharvest specialist with the World Vegetable Center, or AVRDC, a nonprofit research and development institute based in Taiwan, said the sap has potential as an organic and safe coating. A paper published in the Journal of Food Processing and Preservation this March cited Asgar’s work and concluded that a mixture they’d concocted using the sap “showed the best performance for enhancing the shelf life of green bell peppers” when tested against two other coatings.

Asgar is currently negotiating with a few companies interested in commercializing his product that he can only identify as “multi-nationals you’ve probably heard of.” As a scientist, he said, “I look forward to hitting the market, but I’m struggling with things like intellectual property rights.” That said, he has high hopes a gum arabic coating will be for sale within five years.

Because gum arabic is so affordable compared to wax, it is more likely to be accessible even to small farmers. Scale is one of the factors Asgar is considering. “It should be used by people who can get the benefit of it,” he said.

Often food-waste solutions, like increasing refrigeration use, ignore externalities such as the additional load they place on electricity grids or climate change concerns. A product like gum-arabic coating potentially sidesteps these problems. But no technology works in a vacuum, and the social and political impacts will be just as important as the technical specifics. 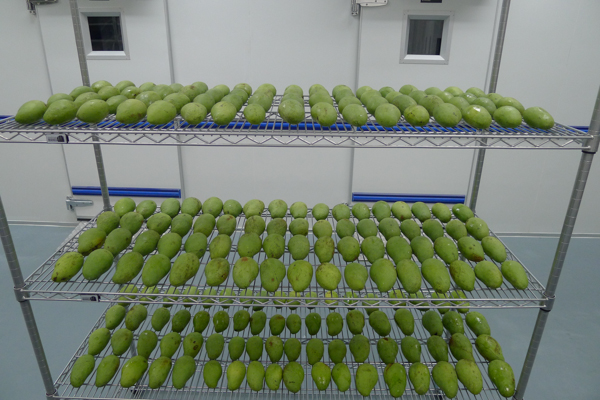 A gum-arabic-based coating is being tested on mangos at the Center of Excellence for Post-harvest Biotechnology (CEPB) in Malaysia. Photo by: CEPB.

In fact, gum arabic is already a global commodity with a pronounced ripple effect. As a natural emulsifier, it’s used in many foods, including soft drinks and common candies like M&Ms, as well as pharmaceuticals, cosmetics, newspaper print, and even shoe polish. It is so crucial to many Western business interests that it was exempted from a 1997 U.S. trade embargo against Sudan, where most of the gum is produced — and that’s not the only time the gum has played a role in world politics. The Washington Post reported that during a news conference in 2007, the Sudanese ambassador to Washington tried to negotiate the end of the sanctions and prevent the U.S. from interfering in the country’s civil war by gesturing with a bottle of Coke. “I can stop gum arabic and all of us will have lost this,” he said.

Over 80 percent of the world’s gum arabic currently comes from Sudan, but the country is only producing about 10 percent of the gum that it could. Harvesting the sap is a labor-intensive process: workers stick stakes into spiny acacia trees, letting the amber liquid froth out, and once it dries they hand pick the sticky chunks off the bark. Micro-finance organizations and major foreign investors recently started supporting gum production, and last year the government announced plans to build 30,000 housing units near acacia plantations. But the demand for more has already led to the sap’s becoming a black-market commodity, tied to groups also trading arms and cash. Recently, ethnic clashes with scores of casualties have developed over land where acacia trees are grown.

But assuming sourcing issues can be made sustainable, Asgar said tapping into gum arabic’s preservative potential could help solve a serious problem. “We have more than enough food to supply for our current global population,” he said, “But still people are dying because of a lack of postharvest technology. Why are people dying when we have enough food?”