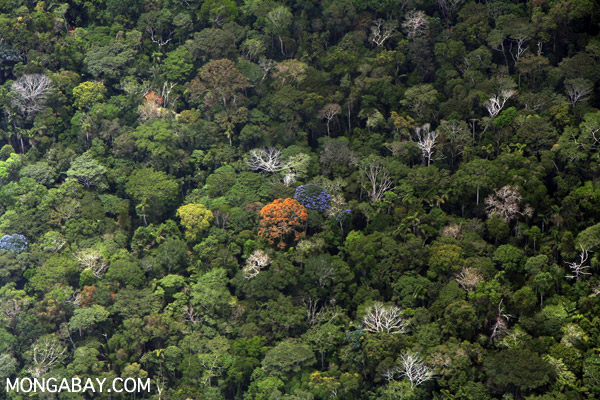 Human activity has destroyed huge swaths of the Amazon rainforest’s biomass as trees are cleared to make way for pasture, soy fields, and other developments. Now, a new study has determined how much that destruction has contributed to climate change.

Researchers with the University of Edinburgh say 1.7 to 1.9 parts per million of atmospheric CO2 — about 1.5 percent of the increased amounts of carbon in Earth’s atmosphere due to human activity — came from the destruction of the Amazon. Their results were published in the journal Geophysical Research Letters.

While they caution that the combustion of fossil fuels has contributed much more to the global atmospheric CO2 load, the study still paints a stark picture of the price the Amazon has paid throughout human history — and how much it may contribute to global warming for years to come.

Were it not for destruction at the hands of man, the Amazon would store 12 percent more carbon in its vegetation, according to the report. That is a net deficit of somewhere between seven and eight billion metric tons of carbon in the Amazon’s above-ground biomass, and it doesn’t even include the carbon stored in the forest’s soil. So the deficit is actually even higher. 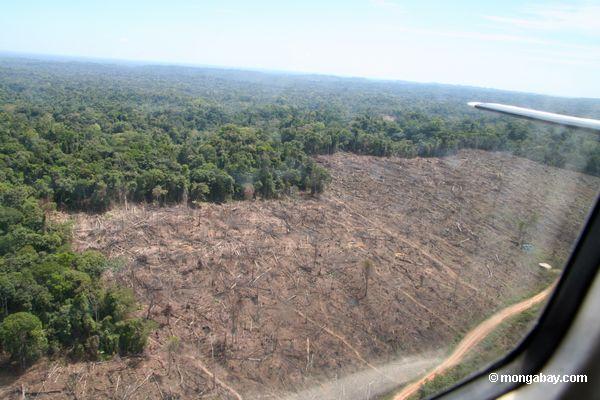 Trees and other flora suck carbon out of the atmosphere as they grow, making the world’s rainforests some of the most important terrestrial carbon sinks helping to offset the emissions from our use of fossil fuels. As the report notes, the world’s forests and other vegetation absorbed about 25 percent of manmade carbon emissions over the past half-century.

Of course, some of the emissions from deforestation in the Amazon were offset by the regrowth of vegetation despite the continued pressure of human activity.

This delicate balance between carbon sinks and emissions of previously stored carbon is known as the carbon cycle. Calculating the historical emissions from deforestation of the Amazon helps us understand it that much better, according to Dr. Jean-François Exbrayat of the University of Edinburgh’s School of GeoSciences, the lead researcher behind the paper.

Exbrayat explained to mongabay.com in a statement how his team calculated the amount of biomass that would be stored in the Amazon if deforestation had not occurred. High-resolution satellite imagery of the rainforest is only available from the year 2000 onwards, so calculating historical emissions from deforestation required the team to create computer models to determine how the rainforest had been impacted in previous decades.

“We trained an algorithm to reproduce the relationship between biomass and climate in identified Intact Forest Landscapes,” Exbrayat said. “Then, we applied the previously trained algorithm to deforested regions to reproduce the potential biomass. The difference between the reconstructed potential biomass and the current biomass represents the net deficit due to past deforestation, including regrowth processes.”

The team ran through the entire procedure twice, and Exbrayat says that the results converged on an 11.5 to 12 percent biomass deficit, which corresponds to the rates observed in ongoing deforestation since the 1960s.

The report doesn’t make any policy recommendations, but shows “the usefulness of frequent biomass inventories to quantify emissions by studying the evolution in biomass,” Exbrayat said.