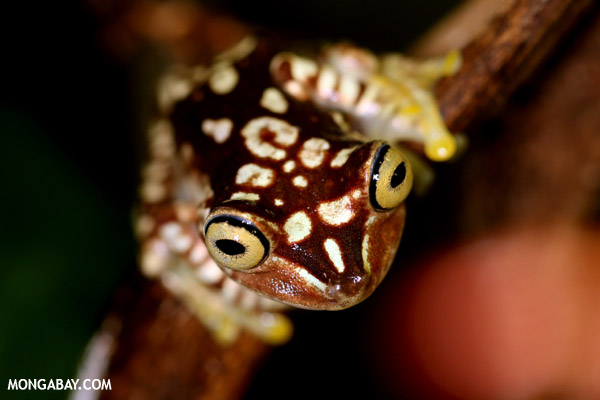 Hypsiboas picturatus, a tree frog found in Colombian and Ecuadorian forests. Photo by Rhett A. Butler.

“We would call it the ‘Triple A’ corridor, because it would go from the Andes to the Amazon to the Atlantic,” Santos said, according to German news organization Deutsche Welle (DW).

Santos plans to propose the protected environmental corridor during the UN climate talks in Paris later this year as a means to combat global warming by preserving forests. But the 135-million-hectare (333.6-million-acre) corridor would also protect some of the most biodiverse regions on the planet as well as the Indigenous peoples who call them home.

Martin von Hildebrand, founding director of the Gaia Amazonas foundation, came up with the idea for the protected area, nearly two-thirds of which would be in Brazil, while the remaining third would be in Colombia and less than five percent would be in Venezuela. Much of the area included in the proposal is already under some kind of protection, but connecting all of the individual protected areas is crucial, according to Hildebrand.

Studies maintain that continuous tract of intact land can support biodiversity far better than fragmented pockets of preserved land. And according to Global Forest Watch, there is more than enough reason to believe that these protected areas may some day soon become isolated pockets: the area that would be encompassed by the corridor lost approximately 1.5 million hectares of tree cover from 2001 through 2012, primarily in regions not currently protected.

“Right now we have a mosaic of parks, indigenous areas and protected areas,” Hildebrand told DW. “Sometimes there is a connection between them. But nevertheless, they are more like islands and are still working as individual areas.” 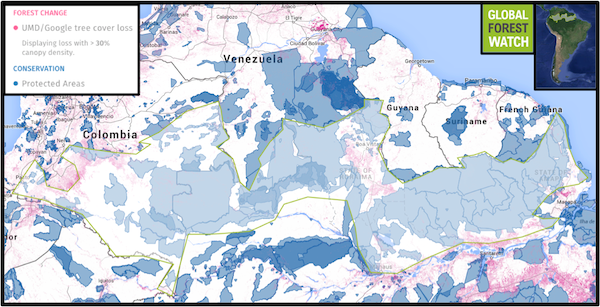 Approximate range of the proposed corridor. The corridor would knit together many protected areas into one long swath along northern South America, and proponents say it may help reduce deforestation in the region. Click to enlarge.

Making the corridor a reality brings with it a number of challenges that will not be overcome easily. For one thing, Brazil and Venezuela have yet to agree to the proposal. And the existing protected areas are subject to various levels of safeguards, so some common standard would have to be agreed upon. But Hildebrand is optimistic that a deal can be struck. “It could just be the right moment for something like this to happen and to inspire the world with something positive around the environment. So I think it has a good chance.”

According to AFP, Colombia’s Environment Minister Gabriel Vallejo and Foreign Minister Maria Angela Holguin plan to begin discussions with Brazil and Venezuela this week, in the hopes that the three countries can present the proposal together in Paris.

If it becomes a reality, the Triple A corridor would be the largest protected area in the world, dwarfing the current largest in New Caledonia by 5,000 hectares. It would also be one-of-a-kind in terms of the biological diversity that would be preserved. Colombia, for instance, contains more than 300 different ecosystems, many of which would be included in the corridor.

“We are going to propose this environmental corridor to preserve it and as a contribution to humanity in the debate on how to arrest climate change,” President Santos is quoted as saying by AFP. 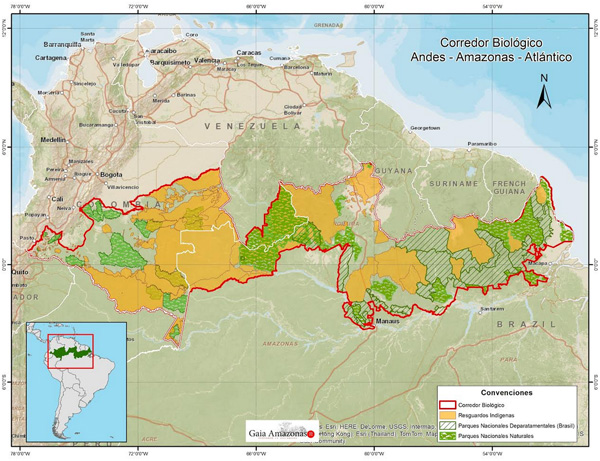