Jungle in Belize. New research finds Belize has been drying out for over a century, likely due to pollution from burning fossil fuels in the northern hemisphere which has left to a shift in the a vital precipitation belt along the equator. Photo by: Rhett A. Butler.

Fossil fuel pollution may have caused a southern shift in a vital rainfall belt across Central America, according to a new study in Nature Geoscience, potentially leading to drier conditions and droughts in some northern tropical countries. Using data from a single stalagmite in a Belizean cave, the researchers were able to create an accurate record of both rainfall and temperature for the last 450 years and show a likely change in the Intertropical Convergence Zone, a precipitation belt around the equator.

“The research presents strong evidence that industrial sulfate emissions have shifted this important rainfall belt, particularly over the last 100 years,” said lead author, Harriet Ridley, from Durham University. According to the research, the shift began around the time of the Industrial Revolution in the northern hemisphere.

The Intertropical Convergence Zone (ITCZ), known to sailors as the doldrums, girdles the planet near the equator. However, it likes heat best. This is important, because when industry in the northern hemisphere ramped up in the mid 19th Century, it spewed tons of sulfate emissions into the atmosphere from burning fossil fuels. Sulfate emissions have a regional cooling effect by reflecting light back into the atmosphere and increasing cloud cover. Scientists believe that when the parts of the northern hemisphere cooled slightly from these emissions—at least compared to the southern hemisphere—the ITCZ migrated southward, repelled by the cooler north.

“Although warming due to man-made carbon dioxide emissions has been of global importance, the shifting of rain belts due to aerosol emissions is locally critical, as many regions of the world depend on this seasonal rainfall for agriculture,” said Ridley. 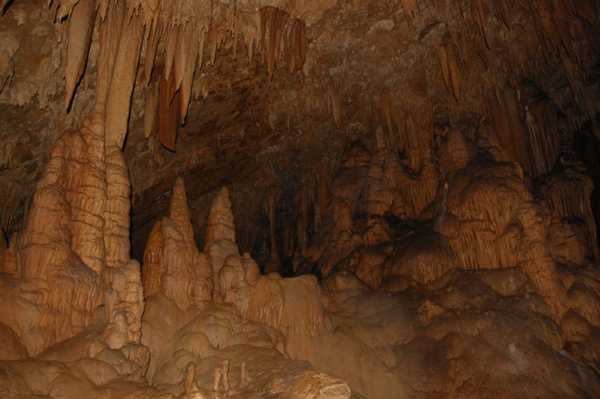 To test this idea, researchers looked at the chemical composition of a single stalagmite from Yok Balum Cave in southern Belize, at the very northern edge of the ITCZ, to reconstruct both temperature and precipitation from 1550 to 2006. From the stalagmite, dubbed YOK_G, the scientists write that they found “an unprecedented drying trend since AD 1850 that indicates a southward displacement of the intertropical convergence zone.”

While the stalagmite showed variability in precipitation, including drying events linked to volcano eruptions in the northern hemisphere (volcanoes also spew out sulfates), they found no overall trend until around the mid-19th Century. Then rainfall suddenly fell and drier conditions persisted. Most recently, severe drought hit Central American countries last year—including Guatemala, Honduras, El Salvador, and Nicaragua—has led to a food crisis in the region as thousands of cattle have perished and crops have failed. Last December, the UN estimated that nearly 2.5 million people were facing food insecurity.

Computer modeling by other researchers has already shown that pollution beginning in the Industrial Revolution likely led to a similar drop in precipitation in the Sahel region of Africa and parts of Asia with possible large-scale impacts on human populations.

The researchers write that the stalagmite is “the strongest proxy evidence available that recent droughts in the northern tropics” are due to sulfate emissions from industry in the Northern Hemisphere. In other words, drying out of parts of Central America is likely not due to natural variation or a natural cycle, but to human-caused pollution.

“The role of sulphate aerosols in repositioning the ITCZ was previously identified using computer modelling, but until now no suitable climate record existed to support those ideas,” confirmed Ridley.

Sulfate emissions are largely released from burning fossil fuels. They lead to acid rain, severe air pollution, and other major environmental problems. But scientists also believe the world would be even warmer today from climate change if not for sulfate emission’s cooling effect, though the impact is short term compared to the warming affect of carbon dioxide. Given this, some have even suggested injecting sulfate into the atmosphere as a form of geo-engineering to counteract worsening climate change.

Globally sulfate emissions peaked in the 1970s and then fell. However, beginning around 2000, emissions began to go up again due to rising emissions from China and other developing countries. These ongoing emissions are very likely still impacting rainfall worldwide.