Borneo consistently makes the list of the world’s “biodiversity hotspots” – areas full of a wide variety of forms of life found nowhere else, but which are also under threat. To better understand the hazards, a study published today in the journal Current Biology examines the effects of climate change and deforestation in the coming decades on mammals living on the island.

“Few forward-planning conservation assessments consider both the effects of climate change and land-cover change on tropical biodiversity,” said author Andreas Wilting of Leibniz Institute for Zoo and Wildlife Research in Germany in a news release, “because land-cover change is difficult to predict reliably.”

Not only is it difficult to forecast how habitats will change, but also how plant and animal species will respond to those changes. Will they adapt to their shifting surroundings, or will they migrate to new areas (if they’re available)? Or, will they go extinct? Borneo is home to many unique species, such as the endangered Bornean orangutan (Pongo pygmaeus). Photo taken in Sabah, Malaysia, by Rhett Butler.

The international team, led by Matt Struebig of the University of Kent in Great Britain, comprised researchers from universities, research institutions and conservation groups. They integrated predictions from models of how the land would change as a result of climate change and deforestation between 2010 and 2080.

Then, they consulted with experts around the world to create maps of suitable habitat – sometimes eight per species – for 81 of the island’s 221 species of mammals. Their database included 13 species of primate, 23 species of carnivore, and 45 species of bat. Borneo is the third-largest island in the world and is divided between three countries: Indonesia, Malaysia and Brunei.

By looking at both climate change and deforestation, the researchers were able to paint a more detailed picture of how suitable habitats might be for Borneo’s wildlife in the future. Running just the climate change model, they found that up to 36 percent of the island’s mammals could lose a third of their habitat. With deforestation added to the mix, the percentage of mammals likely to lose that much rose to almost half.

The team also looked at habitat loss in the past, going back to around 1950, to see how the projected trends compared. Based on their modeling, they concluded that now nearly twice as many mammal species are at risk of losing substantial proportions of their habitat.

As expected, climate change and deforestation will likely hammer lowland areas the hardest. The authors also point out that many habitats deemed “suitable” by the mammal experts are creeping out of these lowland areas and into higher elevations under pressure from climate change.

That’s a positive finding for biodiversity, say the researchers, because a lot of Borneo’s protected areas are found above the island’s lowest elevations. So, chances are good that at least some species will move to habitats that are refuges from human activity such as hunting and agriculture.

Around a quarter of the “best areas” for biodiversity habitat identified by the study are not protected conservation reserves, but they have been set aside as permanent forests. While logging does and will likely continue to occur in these spots, the authors write that these forests may provide the best return on investment for the conservation dollar – or rupiah, ringgit, or Brunei dollar, the island’s three forms of currency.

That’s because, unlike large-scale, single-crop agriculture such as oil palm, companies can selectively log areas while still maintaining enough forest habitat to protect a sizeable number of species. Global Forest Watch Commodities data show the concentration of timber sites in Indonesian Borneo, particularly in the highlands. 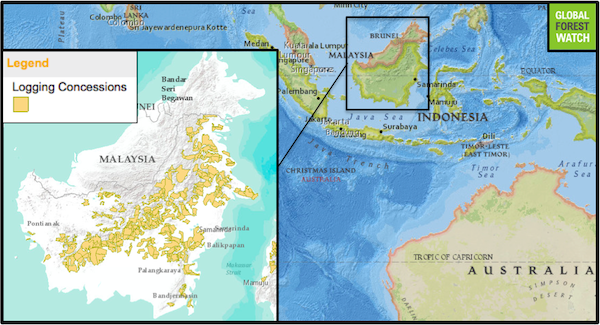 The locations of logging concessions on the Indonesia portion of Borneo (roughly three-quarters of the world’s third largest island). Many are located in higher-elevation areas that are likely to see increased concentrations of biodiversity as a result of climate change. The study’s authors write that partnerships with logging interests could help preserve important diversity habitat located outside of protected areas. Map courtesy of Global Forest Watch and the National Geographic Society. Click to enlarge.

But walking the tight rope between allowing timber extraction and conserving biodiversity will require land managers to follow a number of best practices, write the authors – for example, eliminating the number of ancillary effects such as illegal logging and hunting that often accompany timber developments.

The researchers identified a number of “priority areas,” places where Borneo’s mammals can find suitable habitat when climate change and deforestation through 2080 are factored in. Nearly 90 percent of these spots aren’t further than five kilometers from logging roads. That makes it imperative to close these roads to illicit loggers and hunters for the sake of biodiversity, the authors contend.

If animals are able to make the transition upslope as quickly as climate change alters their habitat – as-yet a major unknown, caution the authors – it’s possible that smaller areas in the higher elevations could house even greater concentrations of biodiversity, the authors say. As species vacate more of the lowland areas, it could be tempting to swap out the protection of lowlands in favor of more biodiverse locations. But that’s a move that wouldn’t take into account the full value of the land, the team argues.

“Downgrading reserves that underachieve conservation objectives is one way to free up land elsewhere,” the authors write, “but we find this difficult to justify given additional conservation values inherent to lowland tropical forests,” such as Borneo’s deep, carbon-containing peatlands. Global Forest Watch Commodities maps show the widespread presence of these important carbon repositories. Also, the authors caution some species aren’t likely to make a successful transition to the highlands, including the large flying fox (Pteropus vampyrus) and the endangered otter civet (Cynogale bennettii).

Instead of shrinking the island’s protected ranges, the authors conclude that finding ways to protect even just a little bit more space could pay off dividends for biodiversity protection.

“Only a modest amount of additional land on Borneo – about 28,000 square kilometers or four percent of the island – would be needed outside of existing protected areas and reserves to safeguard many mammal species against threats from deforestation and climate change,” Struebig said in the news release. The researchers plan to share their work with representatives of all three countries. 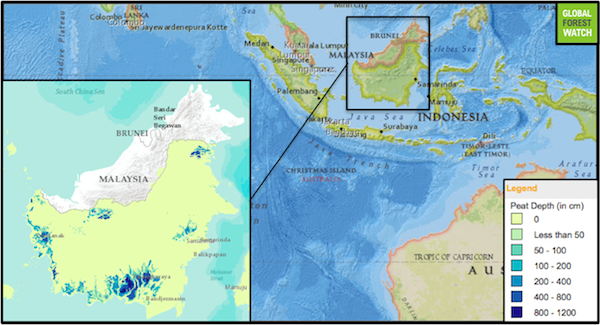