Use of mammals still prevalent in Brazil’s Conservation Units

For as long as humans and animals have co-existed, people have utilized them as resources. Animals, and their parts, have been used for a variety of purposes, ranging from basic food to more esoteric practices such as in magical ceremonies or religion. A new study published in mongabay.com‘s open-access journal Tropical Conservation Science has found that the undocumented use of animals, particularly mammals, continues to occur in Brazil’s protected areas known as Conservation Units. Overlooked statistically, such uses could hinder conservation efforts in the megadiverse country.

The study looked at two communities living in the semi-arid regions of northeastern Brazil—the Sitio Betania community and the Caldas community. Both of these are contained within the Chapardo do Araripe Environmental Protection Area (APA/Araripe). The proximity of the Caldas community to the Riacho de Meio Ecological Park means it attracts more tourist activity, and this, coupled with a local business-based economy, makes it the more urbanized of the two. The Sitio Betania community is still primarily agricultural, with plantations of bean, cassava, and corn, alongside small pastures for cattle and goat. Both areas have precarious living conditions, and as subsistence hunting was legalized in 1998 by Brazil’s Environmental Criminal Law, the researchers suspected that some mammal hunting still occurred. 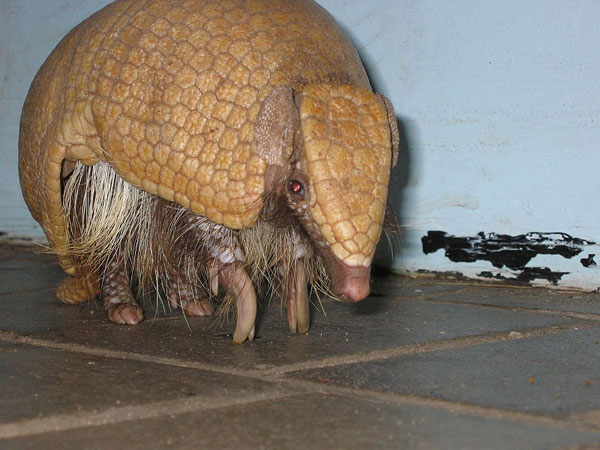 Researchers interviewed over 200 people in these two communities asking about their use of mammals for food, magic or religious purposes, or zootherapeutic, meaning the use of wild animals for medicinal purposes. According to the interviews, local residents still used mammals for all three purposes, and although men and women used them about equally, frequency often depended on the age of the interviewee.

Community members most commonly used mammals for food. Scientists recorded that 17 species were eaten, with the three most common being the gray brocket deer (Mazama gouazoubira), the black-rumped agouti (Dasyprocta prymnolopha), and the Brazilian three-banded armadillo (Tolypeutes trincintus), currently listed as Vulnerable by the IUCN Red List. The study found that adults and elderly consumed more bushmeat than adolescents. The most commonly given reason for eating wild meat was a lack of resources to buy other types of meat.

Respondents used eight species for zootherapy, of which six were wild and two domestic. The most important species were, once again, the gray brocket deer, as well as domesticated sheep. Medicine was usually made from the otherwise unusable parts of an animal, such as their shell, cartilage and horn, as well as the fat, feces and liver. The parts were administered as treatments for approximately 18 diseases. Most people stated they did not use any traditional medication. But within the positive answers, the treatments were primarily used by adults and the elderly. Although, once again, the main reason people cited for turning to zootherapy was a lack of access to mainstream medication.

The superstition category included the highest number of species, with 15 of the 23 recorded being wild. The researchers further subdivided the uses into three categories: animals that bring good luck, animals that bring bad luck, and sacred animals. Respondents said the luckiest animals were gray brocket deer and tapeti (Sylvilagus brasiliensis), while the unluckiest were black domestic cats, common marmosets (Callithrix jacchus), and crab-eating foxes (Cerdocyon thous). Alongside bulls, cows, and donkeys, the gray brocket deer was also the most sacred. All age groups believed in the animals that brought good luck, and the sacred animals, but more adults and elderly believed in bad luck animals than adolescents.

Although both of these communities reside in areas where animal use is prohibited, scientists recorded that the community consumed 24 wild mammals in all. Worryingly, some of the species mentioned are threatened with extinction: namely, the Brazilian three-banded armadillo; the oncilla (Leopardus tirgrinus), listed as Vulnerable by the IUCN; and the jaguar (Panthera onca), considered Near Threatened. The paper reports that these results undermine current conservation strategies in place in Brazil, which suggests that current strategies need to be rethought.

Poverty and a lack of law enforcement in these areas are most likely the chief culprits for the high mammal use, according to the study. A dearth of access to resources often drives people to utilize their surroundings, despite the Brazilian government having several social welfare programs.

“Most likely, what drives hunting in such communities are poverty, cultural traditions, and especially the lack of legal enforcement,” the authors write. “However, it is very hard to assign conservation policies in communities where wild animals have always been seen as critical resources. To avoid ethical conflicts between human needs and wildlife conservation, these policies should take into account the social and cultural aspects of local communities in addressing the use and management of wild animals.”

(09/26/2014) With an estimated population of 700 million individuals, domestic dogs are the most abundant carnivore in the world and are present everywhere that man has settled. Domestic dogs are not usually viewed as a huge threat to wildlife and native habitats, but according to a recent study dogs fit all three categories to be considered an invasive species and may be decimating mammals in agroforests in Brazil.

(09/24/2014) Although not always very wide, roads can be huge barriers to wildlife. Not only do roads break up habitats, making animal movement more difficult, but they also allow people into long-inaccessible natural areas. A new study in mongabay.com’s open-access journal Tropical Conservation Science looks at how drivers on Brazil’s MG-010 road act when faced with small animals, such as snakes, on the path.

(09/19/2014) Brazilian authorities have suspended the auction of the centerpiece of the massive Tapajos hydroelectric complex, reports Agencia Brasil.

(09/14/2014) A plan to build a dozen dams in the Tapajós river basin would drive the loss of an additional 950,000 hectares of rainforest by 2032 by spurring land speculation and mass migration to the region, suggests a new study published by Imazon, a Brazilian NGO.