As if amphibians weren’t facing enough—a killer fungal disease, habitat destruction, pollution, and global warming—now scientists say that a second fungal disease could spell disaster for dozens, perhaps hundreds, of species. A new paper published today in Science finds that this new disease has the potential to wipe out salamanders and newts across Europe, the Middle East, North Africa, and the Americas. The bright side? The disease doesn’t harm frogs, toads, or caecilians.

In 1999, scientists discovered a fungal disease that was responsible for mysterious die-offs of frogs in pristine habitats: Batrachochytrium dendrobatidis or Bd. A type of chytrid fungus, it causes a disease in amphibians called chytridiomycosis, leading to changes in the amphibians’ skin and, in many cases, cardiac arrest and death. The disease is so potent that it has wiped out whole populations in a single season, becoming at least partially responsible for dozens, maybe even hundreds, of amphibian extinctions.

But Bd has proven to not be the end of it. Last year, scientists discovered another chytrid fungus that was wrecking havoc on salamander populations in Europe. They named this one: Batrachochytrium salamandrivorans (Bs) or literally the “salamander-eating fungus.”

At the time of its discovery, this Bs (aptly named) was wiping out populations of fire salamanders (Salamandra salamandra) across the Netherlands. But scientists knew little about it. Today’s ground-breaking paper not only determines what species may be at risk, but also where the disease came from. 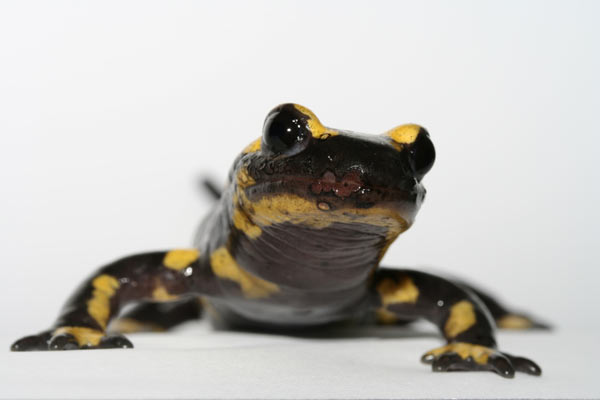 The scientists started by checking for the fungus in wild amphibians from the world. They found it in just two regions: Europe and East Asia, more specifically Japan, Thailand, and Vietnam, where the salamanders proved immune to its impacts. The researchers believe the disease has been in Asia a long time—at least 30 million years—meaning the species have developed resistance to it over millions of years.

So how did the disease come to Europe? The global pet trade, according to scientists.

“Asian salamanders and newts are being traded internationally in large numbers annually,” the researchers write, pointing to the fact that 2.3 million Chinese fire belly newts (Cynops orientalis) were imported into the US between 2001 and 2009 as pets. Chinese fire-belly newts may be a carrier of Bs.

“When a disease has been around for a long time, animals develop resistance to it. Globalization has resulted in the movement of humans and animals all across the world, bringing pathogens into contact with hosts that haven’t had the opportunity to establish resistance,” explains lead author An Martel at Ghent University. “As a consequence, pathogens like Batrachochytrium salamandrivorans that are brought to a new environment can very rapidly threaten many species with extinction.”

In the Netherlands—where the disease was first reported in Europe—the scientists believe the disease was likely passed from a pet Asian salamander into the wild population. The disease can be transmitted simply by touch.

To test this theory, the researchers conducted 2,000 tests from amphibian skins in pet shops in Europe or awaiting export from Asia. They came up with three positives, all from Vietnamese crocodile newts (Tylototriton vietnamensis), a species that was only described in 2005 and is currently listed as Near Threatened by the IUCN Red List. The Red List from 2008 says the species is “probably not” threatened by the global pet trade. However, the paper found that at least two individuals of this newt were imported into Europe in 2010. All it would take for an infected newt to impact a wild population would be physical contact at one time—the disease would spread from that one meeting. 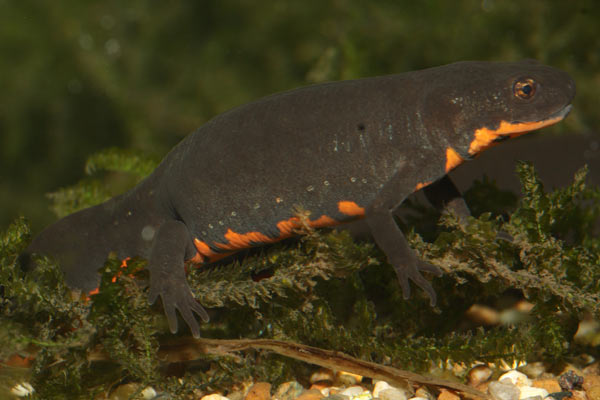 Millions of Chinese fire-bellied newts are being imported into the US and Europe for the global pet trade. Photo by: Frank Pasmans.

Currently Bs is only found in the Netherlands and Belgium, but scientists don’t expect it to stay there. In preparation, the researchers tested the disease on numerous species in the lab to test how each fared.

While only impacting salamanders and newts, the disease could have devastating impacts on some families. In fact, the researchers found that 41 species out of 44 in Europe and North Africa readily died when confronted with the disease. This means the whole region could soon face population collapses and maybe even extinctions.

But what about the Americas? 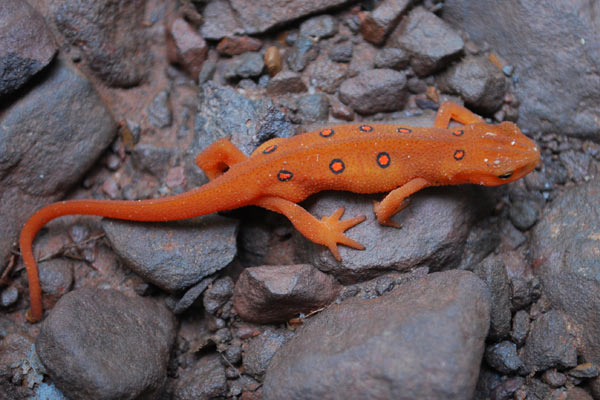 Mortality was 100 percent among Eastern red-spotted newts (Nothophthalmus viridescens) exposed to a fungus from Asia that recently reached Europe, probably carried by salamanders in the pet shop trade. The newt, shown here in its juvenile stage, is a North American native and a popular aquarium pet. Photo by: Nicholas Caruso.

“It would be to early to give a reliable estimate,” Martel told mongabay.com. “We do know that at least several species are susceptible however [on] the vast majority of species [in the America]…we have too little information. If these would be partly susceptible this might mean that several hundred of species could be threatened upon introduction of Bs in the [Americas].”

For example, Bs killed all individuals of the Eastern red-spotted newt (Notophthalmus viridescens) and the rough skinned newt (Taricha granulosa) in the laboratory. Both species are abundant in North America.

“It’s a question of when, not if, this fungus reaches North America,” said co-author Carly Muletz with the University of Maryland said.

The news of this disease must lead to tighter restrictions on importing amphibians into the Americas, says Karen Lips, also with the University of Maryland and considered one of the world’s top experts on amphibian diseases.

“If scientists and policy makers can work together on this, we have a rare opportunity to stop an epidemic from spreading around the globe with potentially deadly effect,” said Lips. 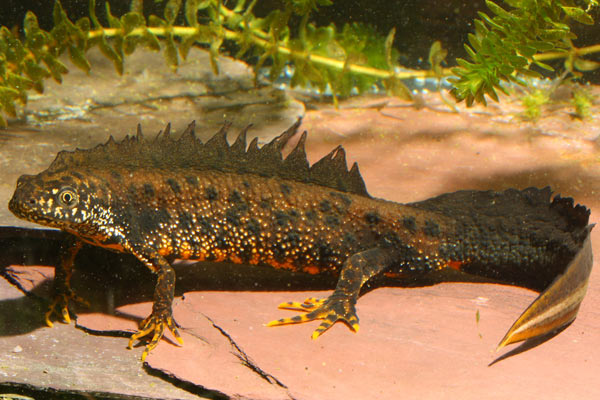 The great crested newt, a protected species in Europe, is among the species that rapidly die once infected. Photo by: Frank Pasmans.

For years, scientists have been rushing against time to find ways to combat Bd’s—the other killer fungus—already-devastating impacts on frogs and salamanders alike. Possible mitigation measures have included anti-fungal baths, heat, and antibiotics. But for species in the wild, the best bet has been collecting individuals for captive breeding until scientists can figure out how to combat the epidemic in the field.

As amphibians are dying worldwide due to these fungal diseases, scientists stress that they are not even the biggest threats. Habitat destruction remains the largest threat to amphibians. Currently, one third to half of all the world’s amphibians are threatened with extinction, while over 130 species are believed to have gone extinct. Another 40 or so are extinct in the wild, surviving only in captivity.

“This study captures a pathogen’s first steps out of Asia,” said Kelly Zamudio at Cornell University. “The more globalized our world becomes, the more our biodiversity will be challenged by diseases moving into areas where they have never occurred before.” 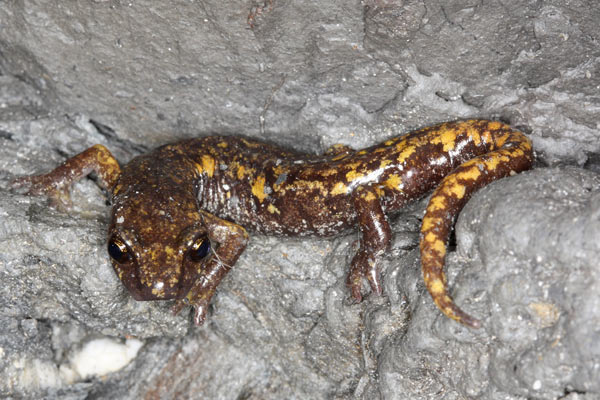 Strinati’s cave salamander (Hydromantes strinatii) from France and Italy is considered Near Threatened already and dies rapidly after infection in lab conditions. The disease hasn’t spread to France of Italy yet, but experts believe it’s only a matter of time. Photo by: Frank Pasmans.

(08/20/2014) Sometimes all it takes is fewer clicks. Scientists have discovered a new species of frog from Madagascar that stuck out because it “clicked” less during calls than similar species. Unfortunately the scientists believe the new species—dubbed the Ankarafa skeleton frog—is regulated to a single patch of forest, which, despite protected status, remains hugely threatened.

(08/05/2014) Scientists have identified a new species of frog on the Malay Peninsula. The newly named Hylorana centropeninsularis was discovered in a peat swamp and genetic analyses revealed that it is evolutionarily distinct from its stream-dwelling cousins.

‘Exciting implications’ for conservation: new technology brings the lab to the field

(06/26/2014) Times have changed, and technological advancements have scaled down scientific equipment in terms of both size and cost. Among them are the tools and procedures needed to conduct molecular genetic analysis. A study published this week explored the potential applications of this new technology, and found that it allows both researchers and novices alike to analyze DNA in the field easily, cheaply, and effectively.