Peruvian authorities have pulled more human remains from a remote river in the Amazon, which may belong to one of the four murdered Ashaninka natives killed on September 1st. These human remains—and those found last week—will undergo DNA testing to determine who they belonged to. It is believed the four Ashaninka men, including renowned leader Edwin Chota Valera, were assassinated for speaking up against illegal logging on their traditional lands.

On August 31st, Chota, left the Ashaninka village of Saweto along with three other leaders to attend a meeting with other Ashaninka groups in a few days. They never showed up. Authorities suspect that Chota, along with his compatriots—Jorge Ríos Pérez, Leoncio Quinticima Melendez, and Francisco Pinedo—were murdered en route.

As body parts were pulled from the river, the indigenous rights group known as the Coordinator of the Indigenous Organizations of the Amazon Basin (COICA) called on Peru to establish land rights for its indigenous people.

Amazon rainforest in Peru. Photo by: Rhett A. Butler.

In response to murders—which were covered by media around the world—the Peruvian government sent authorities to investigate as well as announcing that it would form a commission to combat illegal logging, much as it has done to tackle an epidemic of illegal gold mining across the country’s Amazon regions.

However, Vazquez said these measures were not enough.

“The only way our governments can demonstrate a commitment to ending violence and illegal logging is to title our historic lands in the Amazon.”

Indigenous groups in the Amazon have faced oppression, violence, and assassinations for centuries. But as roads, dams, mines, logging operations, and the fossil fuel industry push deeper and deeper in the region, the violence may be escalating. In fact, a report earlier this year by Global Witness found that 908 environmental activists were murdered globally from 2002 and 2013, yet still admitted this was likely a huge underestimation. More than two thirds of those murdered were involved in land disputes.

“We have faced violence, racism, neglect indifference, all arising from the sense of indigenous as worthless. We are outraged at the ‘colonization’ of the forest, where indigenous peoples are killed with impunity. We are abandoned and stripped of our riches by those in search of rubber yesterday, and today by loggers, miners, oil extractors, and tomorrow anyone who has ‘power,'” COICA, and its partner-organizations, said in a statement following the murders.

The group went on, “Enough is enough! Today it is the Asháninka in Peru, but we are dying trying to stop the destruction of our forests in Venezuela, Bolivia, Brazil and many other nations. The green Amazon is red with indigenous blood. We obey the one principle our ancestors left us—to defend the Amazon and our territories, where beats the life for humanity and the planet’s future.” 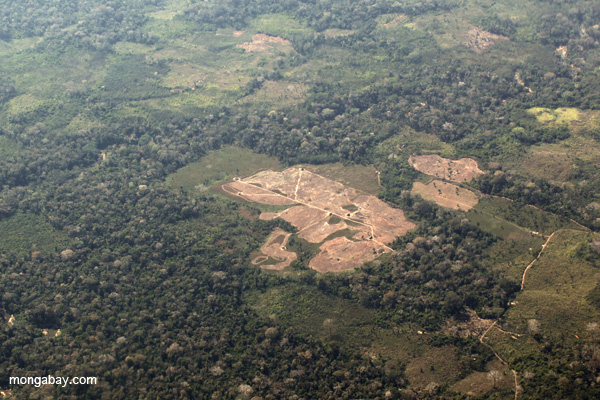 Aerial view of deforestation in the Peruvian Amazon. Photo by: Rhett A. Butler.

Vazquez said indigenous groups were ready to play a major role in mitigating climate change by preserving their forests and lands, but they needed government backing.

“Governments are increasingly recognizing that the titling of traditional territories of forest peoples can achieve both forest protection and social justice for indigenous people,” he noted. “If the governments of the Amazon want to demonstrate their commitment to slowing climate change, we can help. But we need strong rights, and we need an end to the murders and the destruction.”

In the case of Chota, he had warned just last year he faced assassination for his activities to safeguard his peoples’ land.

“The law does not reach where we live,” he told The New York Times. “They could kill us at any time.”

(08/22/2014) Public hearings into alleged violations of indigenous peoples’ land rights will open next week in Palu on the island of Sulawesi. This is the beginning of a series of hearings by the Commission on Human Rights to explore conflicts affecting indigenous people in forest areas. The Commission will travel throughout Indonesia, providing concerned parties an opportunity to meet and discuss land disputes, before submitting the results of their findings to the next president.

(08/12/2014) Figuring out what species live in a given area is important to the determination of its conservation importance. Traditionally, these biodiversity assessments have been done directly by scientists via surveys, which can be very time-intensive and expensive. However, a new study found that interviewing people in local communities who are familiar with the species of their regions could be just as effective – and much cheaper.

(08/11/2014) A generation ago, Borneo was one of the wildest places on the planet. But decades of logging and oil palm plantations has changed the landscape of Borneo forever: in fact a recent study found that the island has lost 30 percent of its total forest cover since 1973. In the face of this large-scale environmental destruction, a new study finds that Indonesian Borneo’s children have a pessimistic view of their future.

(07/31/2014) The Brazilian government has released footage showing ‘first contact’ with an isolated group of indigenous people in the Amazon rainforest.