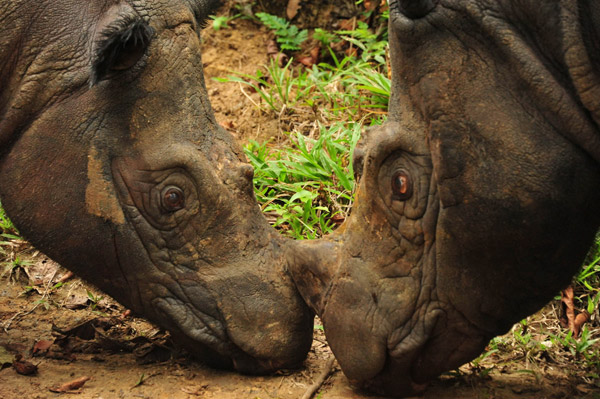 In 1893, William Bell, a surgeon in the service of the Dutch East India Company stationed in Bencoolen, Sumatra, examined the body of a dead rhinoceros. The animal, a male, was relatively small as rhinoceroses go, measuring only four feet four inches at the shoulder and eight feet five inches from its nose to the tip of its tail. Dr. Bell noted that the animal resembled a large hog and judged it to be a young individual based upon the condition of the bones and teeth.

“There were six molares, or grinders, on each side of the lower jaw. The tongue was quite smooth. The ears were small and pointed, lined and edged with short black hair, and situated like those of the single horned rhinoceros. The horns were black, the larger placed immediately above the nose, pointing upwards…; it was about nine inches long. The small horn was four inches long …standing in line with the larger horn, immediately above it. They were both firmly attached to the skull, nor was there any appearance of joint, or muscles to move them,” Bell wrote. “The whole skin of the animal is rough, and covered very thinly with short black hair… The animal had not the appearance of armour which is observed in the single horned rhinoceros.”

The single-horned creature to which Dr. Bell compared the specimen was the greater one-horned or Indian rhinoceros, christened Rhinoceros unicornis by the eminent taxonomist, Carolus Linnaeus, in 1758. It’s not clear if Dr. Bell was aware of the other one-horned species that still inhabited the island of Sumatra at that time. Marco Polo may have observed it early in the 14th century, writing in his journal of the “monoceros”. Sumatra’s “other rhino” was the last of the living species recognized by the scientific community, officially described as the lesser one-horned or Javan rhinoceros (Rhinoceros sondaicus) in 1822. Just over a century later, probably in the 1930s, it was extirpated—wiped out—from the Sumatra, the world’s fifth largest island, though it still survives today in a small population on Java. 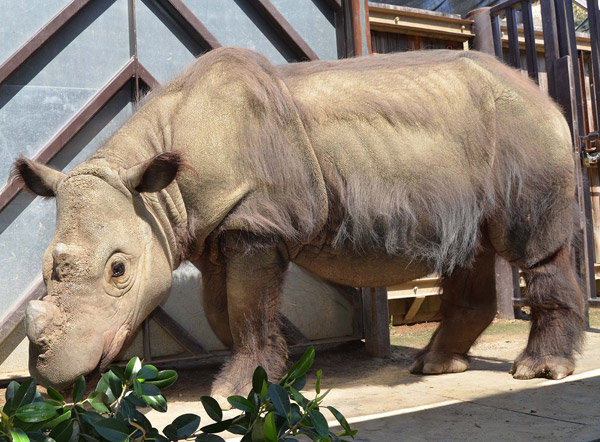 Male, Harapan, born at the Cincinnati Zoo in 2007. Sumatran rhinos are the hairiest of the world’s rhino species. Photo courtesy of Bill Konstant.

It wasn’t until 1814, nearly two decades after Dr. Bell’s anatomical examination, that German biologist Johann Gotthelf Fischer von Waldheim, provided a scientific description of the Asian two-horned or Sumatran rhinoceros (Dicerorhinus sumatrensis). At the time, the species could be found from as far away as Assam in northeastern India, south through mainland Asia and peninsular Malaysia, onto the islands of Borneo and Sumatra. Three subspecies were ultimately recognized, lasiotis in the north, harrisoni on the island of Borneo, and sumatrensis in Peninsula Malaysia and on Sumatra. The species probably once numbered in the tens of thousands across these countries, but centuries of hunting and habitat loss drastically reduced its populations to small fragments. The northern subspecies, lasiotis, is now extinct. There’s a chance that some animals may survive on mainland Asia, but certainly any relict populations cannot be considered viable, including the few animals that somehow have managed to hang on by a thread in Borneo.

The final stronghold for the critically endangered Sumatran rhino is the island from which it derives its name. Experts now believe that about 100 animals survive in three Indonesian national parks: Bukit Barisan Selatan, Gunung Leuser and Way Kambas. Today, the International Rhino Foundation (IRF), working in collaboration with its Indonesian NGO partner, Yayasan Badak Indonesia (YABI), and national authorities, provides anti-poaching patrols in both Bukit Barisan Selatan and Way Kambas National Parks. Specially-trained Rhino Protection Units (RPUs) assist government forest guards by conducting round-the-clock surveillance, as well as monitoring populations of Sumatran rhino, elephant, tiger and tapir. Seven four-man RPUs patrol Bukit Barisan Selatan and five units are stationed in Way Kambas, a total of 48 well-trained professionals safeguarding elusive rhinos that barely outnumber them. Though the park guards and rangers cover thousands of kilometers each year on patrol, the number of times they directly observe Sumatran rhinos in the wild can easily be counted on only one or two hands. They confirm the presence of survivors through indirect evidence – footprints, dung, wallows and plants that have been fed upon. Measurements are routinely taken and samples collected for further scientific investigation, allowing experts to estimate population densities and composition. Thanks to the protection afforded by the RPU program, the last documented incident of a Sumatran rhino being killed by poachers took place in Way Kambas National Park in 2006. Support for this crucial effort comes from a funding consortium that includes a variety of government, foundation and private sources, including annual Bowling for Rhinos fundraising events held by the American Association of Zookeepers. 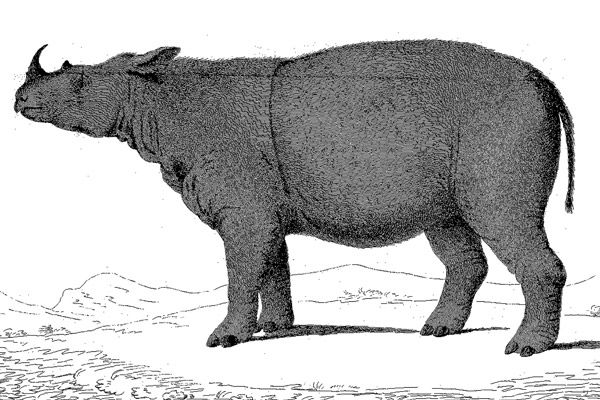 In addition to the remaining wild Sumatran rhinos, nearly another ten rhinos are currently maintained in three managed breeding centers: five at the Sumatran Rhino Sanctuary in Way Kambas National Park, three at the Borneo Rhino Sanctuary in Sabah, Malaysia, and two at the Cincinnati Zoo in the United States. Four Sumatran rhinos have been born in captivity thus far this century, the first three in Cincinnati. The first one, Andalas, was born in September 2001. As part of an international commitment to the species, he was sent to Indonesia, where he mated with a wild-caught female, Ratu, and fathered a male calf, Andatu—the first Sumatran rhino born in captivity in its native Indonesia. Andatu’s birth has helped focus attention on the plight of this Critically Endangered species. Just a few weeks prior to Andatu’s arrival, Indonesia’s president launched the International Year of the Rhino. In March 2013, rhino specialists from around the world convened in Singapore for a Sumatran Rhino Crisis Summit and, only a few months ago, the first meeting of Asian Rhino Range States, held in Bandar Lampung, called for expanded protection efforts on behalf of Sumatran, Javan and Indian rhinos.

The New Year marks the bicentennial anniversary of the Sumatran rhino being described by science. A species that appeared on Earth millions of years ago now battles for its very survival. Protection efforts that have proven successful must not only continue, but be expanded. If we do this, 2014 will mark the beginning of the Sumatran rhino’s recovery. Should we fail to mobilize, the years ahead will simply bring us closer to its requiem. 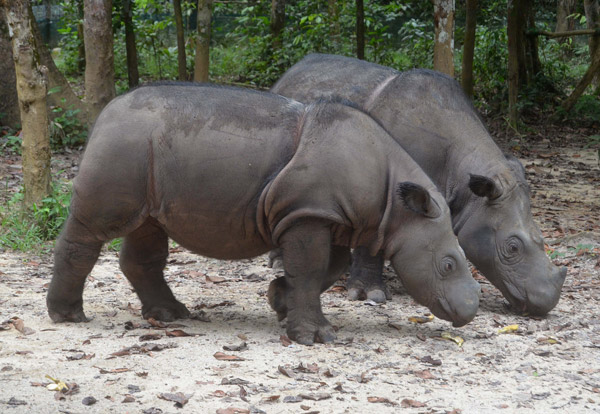 Andatu (one year old) and his mother, Ratu, at the Sumatran Rhino Sanctuary. Photo by: Bill Konstant. 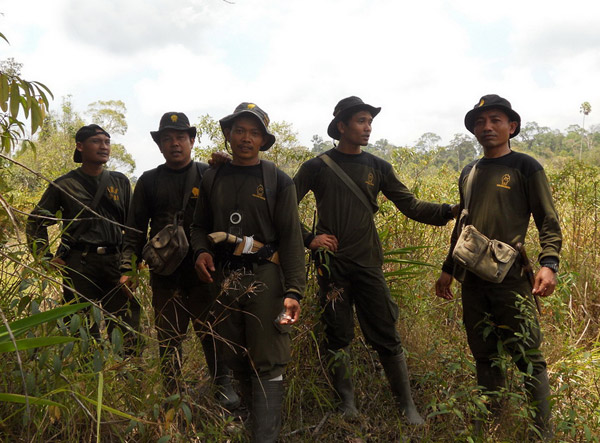 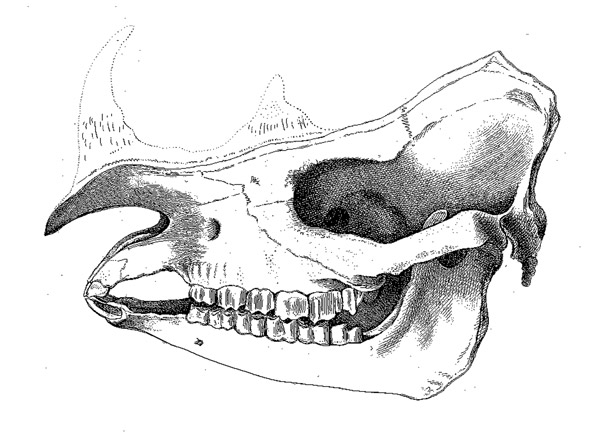 Skull of the Sumatran rhino. Illustration by: William Bell, 1793. 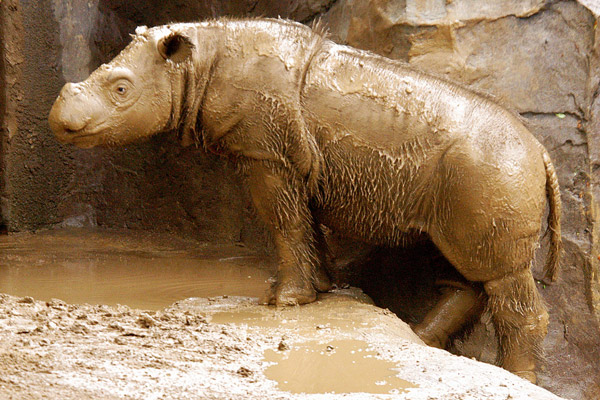