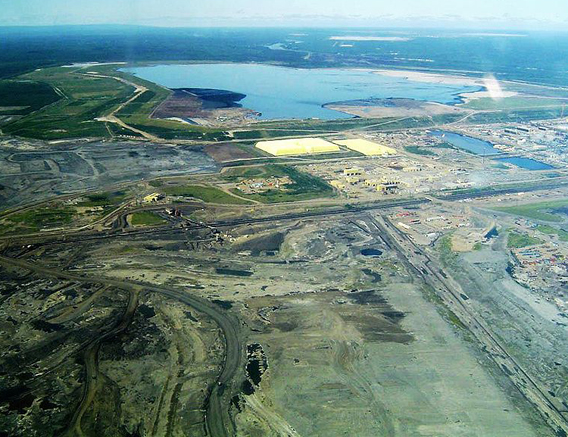 A portion of the tar sands in Alberta as viewed from the air in 2006. Some have dubbed this the ‘largest energy project in the world.’

Yesterday, climate activists marched around the White House in opposition against the Keystone XL pipeline, which if built will carry tar sands from Canada to the Gulf of Mexico and an international market. The protest, which included over 3,000 people according to organizing groups, is an opening salvo in activists’ battle to convince the Obama Administration to turn down the pipeline for good.

“It’s time to start holding the fossil fuel industry accountable for the wholesale damage they’re doing to our planet,” said Bill McKibben head of 350.org in a press statement. “If [Hurricane] Sandy showed us anything, it’s that the hour is late and the need is urgent–but the fossil fuel industry has terrified our politicians and the result has been two decades of inaction. We need that to change.”

Organized by 350.org, the Sierra Club, and other groups, the march hoped to capture the attention of newly re-elected President Obama. In late 2011, the Obama administration delayed a decision on the Keystone XL Pipeline after green groups raised considerable pressure through civil disobedience and large-scale protests. But with the election behind them, it’s expected the Obama Administration will look again at the pipeline and many experts anticipate the massive project will be rubber-stamped.

The pipeline has become a symbol for a lack of action on climate change in the U.S. Although estimates vary, tar sands emit significantly more carbon than conventional oil sources. Oil taken from tar sands—which is a mix of bitumen, clay, sand, and water—must go through a high energy process and be mixed with a lot of freshwater. The controversial industrial process has also caused significant deforestation in Canada’s boreal forest and polluted nearby rivers. If built, the pipeline would carry around 800,000 barrels of oil every day 1,700 miles from the tar sands Alberta. Protestors fear that opening up the tar sands to an international market will spur large-scale expansion in Canada, and resulting greenhouse gas emissions.

NASA climatologist, James Hansen, has stated that if the full-extent of the tar sands was exploited along with the world’s coal reserves “it is essentially game over” for the climate.

The International Energy Agency (IEA) recently warned that the world could only consume one third of known fossil fuel deposits before 2050 if we are to have a fifty percent chance of keeping the 2 degree Celsius goal. Meanwhile a new report by the World Bank warned that the world was headed toward a rise in temperatures of 4 degrees Celsius, which scientists agree would lead to catastrophic warming.

“In 2012 we’ve seen epic droughts and the Sandy superstorm—extreme weather delivering a loud and clear message that solutions to climate disruption can’t wait. Keeping tar sands out of America is a critical step to turn this problem around,” Sierra Club President, Allison Chin, said.

In his victory speech, President Obama mentioned the need to tackle climate change. He also talked at some length about the issue at a press conference last week. There he stated that climate change action would not come before jobs and economic growth.

Kelly Blynn: activists not “letting the pressure off” on Keystone pipeline

(02/06/2012) Along with Bill McKibben and a small cadre of passionate environmental activists, Kelly Blynn co-founded the climate activism group “350.” 350 exemplifies the power of online networks combined with activism and has coordinated some of the largest and most successful environmental protests in history. The 350 team has organized more than 5,200 events in 181 countries around the world. Kelly graduated from Middlebury College with a degree in Geography and Environmental Studies and experience coordinating one of the largest university campus environmental activism groups in the United States. Blynn is currently situated in Washington, D.C.