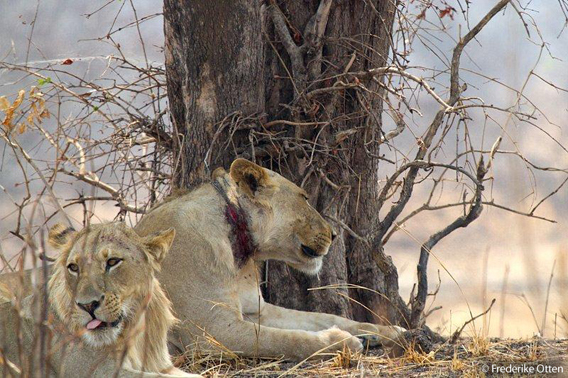 Lion with a snare around its neck. Photo by: Frederike Otten. Courtesy of Panthera.

Bushmeat hunting has become a grave concern for species in West and Central Africa, but a new report notes that lesser-known illegal hunting in Africa’s iconic savannas is also decimating some animals. Surprisingly, illegal hunting across eastern and southern Africa is hitting big predators particularly hard, such as cheetah, lion, leopard, and wild dog. Although rarely targets of hunters, these predators are running out of food due to overhunting and, in addition, often becoming victims of snares set out for other species.

“Snaring is the most common illegal hunting method and is particularly undesirable from a conservation perspective as it is highly effective, difficult to control, unselective in terms of the genders or species of animals captured, wasteful, and has severe animal welfare implications,” reads the report which was co-authored by Panthera, the Zoological Society of London (ZSL), and the Wildlife Conservation Society (WCS).

The report finds that demand for bushmeat is growing in both eastern and southern Africa as populations boom–human populations in Africa are growing faster than anywhere else in the world–and protected areas suffer from ongoing human encroachment. In addition, bushmeat is becoming seen as a “luxury” good in urban centers, pushing some in rural communities to see illegal hunting as a new livelihood where there are few.

The bushmeat boom, which has not been largely studied across eastern and southern Africa, has put the continents big predators on notice, according to the report.

“Most cheetahs and African wild dogs occur outside protected areas, coexisting with people and their livestock, and are very vulnerable to snaring and the loss of their wild prey,” says Netty Purchase with both ZSL and WCS.

Cheetahs (Acinonyx jubatus) are currently listed as Vulnerable by the IUCN Red List, while African wild dogs (Lycaon pictus) are considered Endangered. Africa’s most well-known top predator, the lion (Panthera leo), is listed as Vulnerable with data showing it has plunged by 30 percent since 1990. Leopards (Panthera pardus) are probably doing the best of the four, and are listed as Near Threatened. All of these predators face other threats beyond illegal hunting—including habitat loss, human-wildlife conflict, and in some cases trophy hunting—but an overall decline in prey and injuries or death caused by snare cannot be overstated. For example, in Mozambique’s Niassa Reserve over half of lion mortalities are caused by snares.

The report notes that some areas have undergone “empty savanna syndrome,” similar to the more well-known “empty forest syndrome.” The ecosystem is there, but large wild mammals are simply gone due to unregulated over-hunting. In some countries, hunters have begun turning to smaller animals, as larger-bodied mammals have vanished.

Recommendations from the report include addressing human population growth through education and family planning; better land-use planning; providing alternative livelihoods and other protein sources in rural areas; encouraging tourism and sustainable-use of wildlife; as well as passing and enforcing better laws.

“Frank discussion of the issue of high levels of human population growth within and near to protected areas is required,” the freely-available report reads, “because if current trends continue, other interventions to address illegal hunting the bushmeat trade are much less likely to succeed.” 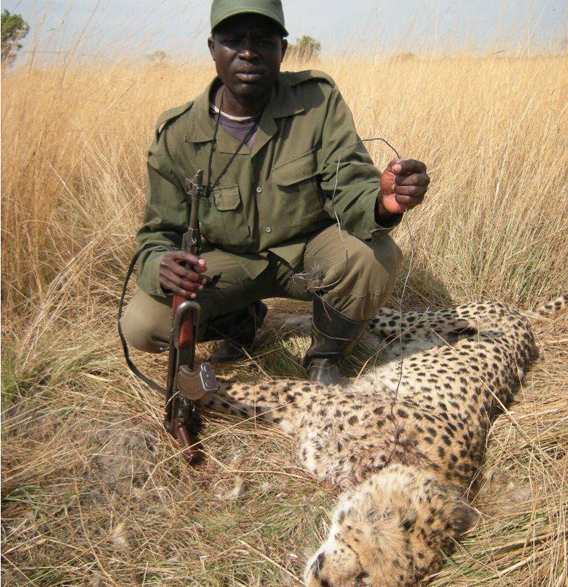 Conflict and perseverance: rehabilitating a forgotten park in the Congo

(09/19/2012) Zebra racing across the yellow-green savannah is an iconic image for Africa, but imagine you’re seeing this not in Kenya or South Africa, but in the Democratic Republic of Congo (DRC). Welcome to Upemba National Park: once a jewel in the African wildlife crown, this protected area has been decimated by civil war. Now, a new bold initiative by the Frankfurt Zoological Society (FZS), dubbed Forgotten Parks, is working to rehabilitate Upemba after not only decades of conflict but also poaching, neglect, and severe poverty.

(09/17/2012) Bushmeat consumption depends on the make-up of individual communities, according to a new study in the open access journal Tropical Conservation Science. By interviewing indigenous groups and refugees living near two protected areas in western Tanzania, researchers found that consumption rates differed significantly, likely based on costliness and access.