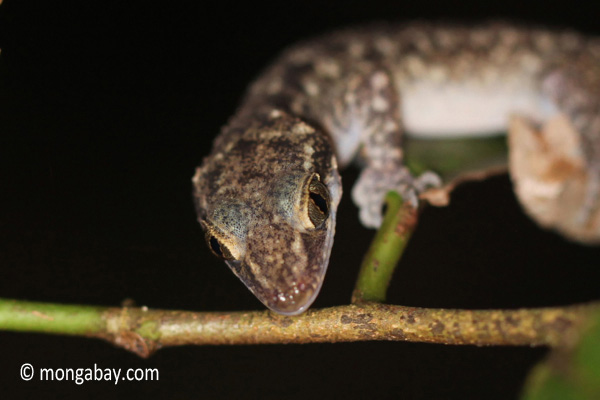 An as yet unidentified species of gecko on the island of Java, Indonesia. Photo by: Rhett A. Butler.

World leaders need to do much more to protect the Earth’s millions of species for the services they provide, according to a new scientific consensus statement in Nature based on over 1,000 research papers. Written by 17 top ecologists, the statement points out that despite growing knowledge of the importance of biodiversity for human well-being and survival, species continue to vanish at alarming rates. The statement comes just weeks before the UN’S Rio+20 Summit on Sustainable Development, which is supposed to chart a path for a less impoverished and more equitable world including an emphasis on greater environmental protections, but which has been marred by a lack of ambition.

“We need to take biodiversity loss far more seriously—from individuals to international governing bodies—and take greater action to prevent further losses of species,” said lead author Bradley Cardinale, with the University of Michigan, in a press release. “This is a consensus statement by experts who agree that loss of Earth’s wild species will be harmful to the world’s ecosystems and may harm society by reducing ecosystem services that are essential to human health and prosperity.”

Cardinale and colleagues found that research over the past two decades has proven again and again that biodiversity is key for functioning and abundant ecosystems, which supply humanity with food and commodities. For example, the scientists write that the evidence shows that genetic diversity boosts crop yields, fisheries’ catches, wood production, and fodder in grasslands. They also point out that plant diversity increases carbon sequestration and improves soil health, while decreasing plant disease and mitigating the damage done by invasive species.

“We’ve reached a point where efforts to preserve species and biological diversity might no longer be an act of altruism,” explains co-author, Diane Srivastava, with the University of British Columbia. “This research review dramatically underscores the importance of strengthening—not weakening or curtailing—environmental assessment processes in order to stem the tide of the loss of species and diversity that so many humans benefit from and depend on.”

Scientists have been warning for decades that if business-as-usual continues the Earth may well undergo a mass extinction with large-scale impacts on human society. Last year, 99.5 percent of 583 conservation scientists agreed in a survey in Conservation Biology that a serious loss in biodiversity was ‘likely’, ‘very likely’, or ‘virtually certain’.

According to the IUCN Red List, over 19,000 species are currently classified as Vulnerable, Endangered, or Critically Endangered. The IUCN has also recorded 875 extinctions in the the last 500 years. However the Red List has only had the capacity to date to analyze around 3 percent of the world’s known species—mostly mammals, birds, and amphibians—which number about 2 million in total. The vast majority of extinctions have likely gone undocumented, with lesser-known species simply vanishing beyond human record.

“No one can agree on what exactly will happen when an ecosystem loses a species, but most of us agree that it’s not going to be good. And we agree that if ecosystems lose most of their species, it will be a disaster,” said co-author Shahid Naeem of Columbia University.

The scientists say that many questions regarding the importance of biodiversity to the world’s ecosystems remain unanswered, but emphasize that researchers know enough now to make the point that biodiversity is inherently connected to human well-being.

While the ecologists’ consensus statement has been released in conjunction with the Rio+20 Summit, many already fear the summit is a failure before it has even begun. Yesterday, the World Wide Fund for Wildlife (WWF) warned that negotiations over an already watered-down agreement to be signed at the summit could well “collapse.” Even before this expectations for the summit, which is devoting little time to global environmental crises like climate change and deforestation, have been low. Some observers say that while governments are failing to take the summit seriously, it will bring together hundreds of NGOs, businesses, and experts who, together, could build useful coalitions to help tackle global environmental and poverty issues.

(05/02/2012) For decades scientists have been warning that if global society continues with “business-as-usual” practices the result will be a mass extinction of the world’s species, an extinction event some researchers say is already underway. However, the direct impacts of global biodiversity loss has been more difficult to compile. Now a new study in Nature finds that loss of plant biodiversity could cripple overall plant growth.

Cinderella animals: endangered species that could be conservation stars