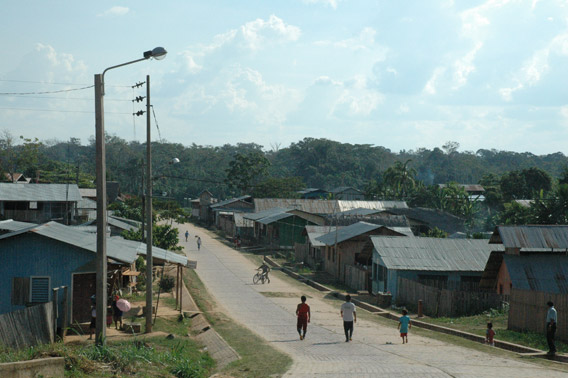 A view of Puerto Esperanza. Photo by: David Hill.

A grassroots indigenous organization in Peru is calling for the removal of an Italian Catholic priest from the remote Amazon in response to his lobbying to build a highway through the country’s biggest national park.

The park, in the Purus region in south-east Peru, was founded with the WWF’s support and is home to at least two groups of indigenous people living without any contact with outsiders, often called “uncontacted.”

The priest, Miguel Piovesan, has been vigorously promoting the highway in his parish magazine, on the parish radio and even during mass in the local church. The parish website features a photo of a sign reading, “WW, GET OUT OF PURUS NOW,” “WW” being local short-hand for the WWF.

But FECONAPU, an indigenous organization based in Purus’s only town, Puerto Esperanza, is firmly against the road.

It calls Piovesan’s lobbying a “disinformation campaign” and says he has “insulted,” “mocked,” “humiliated” and “defamed” Purus’s indigenous residents opposed to his plans.

“For years indigenous people in Purus have been the object of constant mockery and humiliation from the Catholic church’s representative, who has been obsessively trying to build a highway between Puerto Esperanza and Inapari,” says FECONAPU, which represents 47 indigenous communities in Purus and claims the priest’s lobbying has created “marked ethnic tension” in the region.

FECONAPU is now demanding Piovesan’s removal and is urging national indigenous organization AIDESEP to raise the matter with his superiors at the Apostolic Vicariate, which falls under the immediate responsibility of the Vatican, in a town in Peru’s south-east.

Piovesan, from Italy’s Veneto region, refused to comment, but a spokesman said the “uncontacted tribes ‘made him laugh’.”

The priest has previously denied the existence of the tribes, leading one critic to describe him as “believing in the existence of God but not in indigenous people who live in voluntary isolation.”

FECONAPU is also calling for an investigation into Piovesan’s “real motives,” and, according to AIDESEP, it has announced it will march in protest against him.

“Purus’s indigenous population is against the highway,” says FECONAPU’s Flora Rodriguez Arauso. “The people who want it are the priest and a few mestizos who actually live in Pucallpa.”

Piovesan argues the highway would bring “development,” “freedom” and cheaper goods to Purus. At present, the region is so remote its only connection with the rest of Peru is by plane.

But the director of the national park, Arsenio Calle Cordova, has dismissed these claims, saying the highway is about opening up the otherwise inaccessible forest to loggers in search of valuable timber.

The Upper Amazon Conservancy, an American NGO working in the region, warns the highway could lead to “exponential increases in illicit resource extraction” including drug trafficking, mining and poaching as well as logging.

Piovesan, who claims support from some local people, is fiercely critical of his opponents, both in Peru and abroad.

In the latest edition of the parish magazine, Purus is described as “the property of polluting countries in the First World which, under a facade of ‘protected areas,’ are really protecting their own selfish, inhumane interests.”

“The majority of indigenous people in Purus, as well as local and even national authorities, believe the construction of this road would be extremely worrying,” says Jorge Herrera from the WWF, which continues to support the national park’s protection. “It is not a road that would solve Purus’s isolation, but a strong government presence.”

If built, the highway would connect to the Inter-Oceanica road system running all the way from Brazil’s Atlantic coast to Peru’s Pacific.

In addition to the national park, called by the WWF “a vast portion of the Amazon in its original state,” the highway would cut through Purus’s Communal Reserve and a reserve for ‘uncontacted’ people in the Madre de Dios region.

Piovesan’s position is in stark contrast to that adopted by other Catholic clergy in Peru in recent years.

In a statement titled ‘The Catholic church’s role in the Peruvian Amazon’ made in 2010, the president of Peru’s Conference of Bishops committed his organization to promoting peace and warned against allowing powerful economic interests to exploit natural resources at the expense of others and the environment.

“It’s reprehensible that a representative of God should adopt this kind of attitude,” says ORAU, an indigenous organization, based in Pucallpa, to which FECONAPU is affiliated. “It’s an attitude that is far removed from his role as an evangelist and quite different from what is recommended by the Catholic church.”

Last month a delegation from Peru’s Foreign Relations Commission visited Purus to hold a public meeting and announced it would push for the highway’s construction in Congress.

The meeting was condemned by FECONAPU, AIDESEP and the national park’s management committee, which complained many indigenous people could not attend or understand what was being said.

Opposition to the highway centers on the impact it would have on local people, including the uncontacted groups, and the rainforest.

“It’s the largest protected area in the country and it now runs a serious risk of being invaded by a highway which threatens to destroy the lives of thousands of indigenous people by exposing them to the dangers of drugs trafficking, illegal logging, and unwanted contact,” says AIDESEP.

Some of the uncontacted people at risk are known as the ‘Mashco-Piro.’ Photos of a different ‘Mashco-Piro’ group made world headlines earlier this year after they were published by Survival International.

“It’s an outrage that in the face of massive indigenous opposition plans for this road continue to push ahead,” says Survival’s Rebecca Spooner.

Indigenous groups fight for recognition and illumination in Peru

(03/26/2012) “Shh, wait here,” Wilson told me. I ducked down behind the buttress of a large tree to wait. We had been walking through the jungle for a few hours. At first we followed a path through the undergrowth, a wet world of ferns, trunks and lianas speckled with the sunlight that made it down through the canopy and understory, but soon we simply walked along a route Wilson picked out. I had been trying to concentrate on the myriad sounds: cicadas were the background and various small birds tweeted from different points. We were listening and looking for signs that would lead us to prey—perhaps the calm whistle of a perdiz or the scent—marking of a boar—but just before Wilson became excited I had heard nothing. He stopped and said, “Red monkeys,” pointing ahead.