Clearing for soy in the Brazilian Amazon

Surging demand for vegetable oil has emerged as an important driver of tropical deforestation over the past two decades and is threatening biodiversity, carbon stocks, and other ecosystem functions in some of the world’s most critical forest areas, warns a report published last week by the Union of Concerned Scientists (UCS).

But the report, titled Recipes for Success: Solutions for Deforestation-Free Vegetable Oils, sees some reason for optimism, including emerging leadership from some producers, rising demand for “greener” products from buyers, new government policies to monitor deforestation and shift cropland expansion to non-forest area, and partnerships between civil society and key private sector players to improve the sustainability of vegetable oil production.

“It’s important for consumers to insist that companies ensure the products they sell are deforestation-free,” said report co-author Calen May-Tobin, a policy analyst with UCS’s Tropical Forests and Climate Initiative, in a statement. “If leading companies commit to using deforestation-free vegetable oil in their products, others will follow suit, curbing the rate of deforestation and climate change.”

Vegetable oil demand has grown by more than five percent annually over the past decade due to rising affluence and population. To meet increased demand, large swathes of land have been converted for rapeseed (canola), oil palm, sugar cane, maize (corn), and soy. Some of the area has included carbon-dense rainforest in Brazil, Malaysia, and Indonesia, a development that has alarmed environmentalists, scientists, and people who rely on forests for subsistence.

But concern over the impact of oilseed expansion has begun to spur reform. Targeted campaigns by environmental groups have led some buyers to demand that palm oil, soy, and other oilseeds be produced at a lower cost to the environment. For example, a high-profile investigation by Greenpeace in 2006 led the Brazilian soy industry to implement a moratorium on conversion of rainforests for soybeans. Subsequent Greenpeace reports targeting PT SMART, an Indonesia palm oil giant owned by Sinar Mas and Golden Agri Resources (GAR), caused Unilever and Nestle — major palm oil buyers — to enact strict sourcing policies. These eventually led PT SMART to adopt a progressive policy that limits new oil palm development to lands with less than 35 tons of carbon and requires informed consent on the part of communities that may be affected by new plantations. PT SMART was the first, and remains the only, Indonesian palm oil major to establish such a policy, which effectively mandates deforestation-free palm oil.

While the developments are encouraging for the sake of the environment, hurdles remain. Some companies continue to strongly resist any effort to limit expansion into forests and peatlands. For example in February, GAPKI, the Indonesian palm oil industry association, inaccurately asserted that the United States and the E.U. banned Indonesian palm oil due to greenhouse gas emissions associated with production. GAPKI seems to have made the claim in part to stir up resentment towards efforts to improve the environmental performance of palm oil. Last year some Indonesian palm oil companies successfully lobbied to weaken Indonesia’s moratorium on new forest concessions for plantations.

Still the UCS report provides examples of nascent efforts to encourage oilseed expansion in degraded, non-forest areas, including conversion of invasive alang alang grasslands for oil palm plantations in Indonesia and low productivity cattle pasture for soy in Brazil. Not mentioned in the report, but important, is Brazil’s push to expand oil palm plantations in long ago deforested areas. The government’s biodiesel plan offers economic incentives to producers who follow strict social and environmental standards. The initiative could put pressure on developers who continue to clear forest for new plantations. 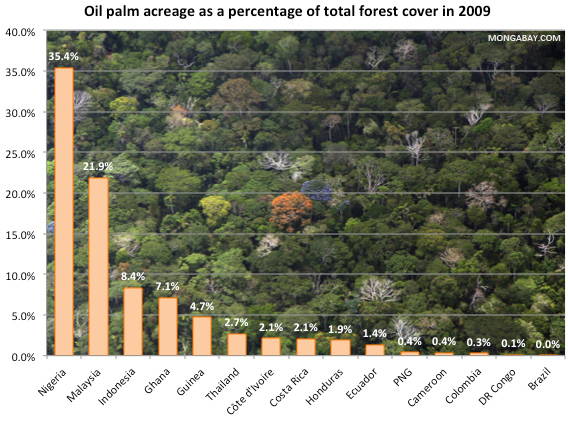 Oil palm acreage as a percentage of total forest cover in 2009. Data from FAO and the governments of Indonesia and Malaysia. Photo by Rhett A. Butler 2005.

Recipes for Success ends on hopeful note, concluding that future demand for vegetable oil can be met without converting critical forest areas.

“Producing deforestation-free cooking oils and other products is absolutely doable. We’ve seen it work in Brazil and we are encouraged by Nestle’s policies,” said May-Tobin in a statement. “But it’s up to businesses and governments to make the commitment and consumers to hold them to it.”

(02/07/2012) More companies are reporting on the impact of their operations on global forests, finds a new report. Eighty-seven global corporations disclosed their “forest footprint” in 2011, according to the third Forest Footprint Disclosure (FFD), which asks companies to report on their impact on forests based on their use of five commodities: soy, palm oil, timber and pulp, cattle, and biofuels. This is a 11 percent rise from the companies that reported in 2010, including the first reports by companies such as the Walt Disney Company, Tesco UK, and Johnson & Johnson. However a number of so-called “green” companies continue to refuse to disclose, including Patagonia, Stonyfield Farms, and Whole Foods Markets Inc.

(01/10/2012) Intensive palm oil production is expanding at the expense of biolologically-rich lowland rainforests in the Peruvian Amazon, reports a study published in Environmental Research Letters. The research indicates that enthusiasm for oil palm — one of the world’s most lucrative crops — is taking a toll on forests outside of Southeast Asia, where the vast majority of palm oil is produced.