Geology has split the Amazon into two distinct forests

Aerial photo of an Amazon rainforest tributary in Peru. Photo by: Rhett A. Butler.

The common view of the Amazon is that it is one massive, unbroken forest. This impression is given by maps which tend to mark the Amazon by a large glob of green or even by its single name which doesn’t account for regional changes. Of course, scientists have long recognized different ecosystems in the Amazon, most especially related to climate. But a new study in the Journal of Biogeography has uncovered two distinct forest ecosystems, sharply divided, caused by million of years of geologic forces.

“We look at a boundary of over 300 kilometers between two geological formations, the Nauta Formation and the Pebas Formation,” lead author Mark Higgins with Duke University told mongabay.com. “The forests of these two geological formations differ by almost 90 percent in their plant species and this turnover occurs in under two kilometers. So, we see an abrupt and almost complete change in plant species between the two formations.”

The major difference in the two Amazonian forests, which split in northern Peru, is soil fertility: the Pebas Formation is 15 times more fertile than the Nauta. This means that the two forests support very different plant species.

“On the poor soils, the plants invest very heavily in roots and leaf defenses, to acquire and hold onto scarce nutrients; while on rich soils, the plants are free to invest heavily in height and competition for light,” explains Higgins, who says the different ecosystems are easily identifiable.

“While the Pebas Formation forests look like your typical tall rainforest, the poor-soil Nauta Formation forests are a different matter completely. In these forests […] the ground is often covered by a spongy mat of roots up to 10 centimeters in depth. Sprouting from this root mat you can find hundreds of tiny roots climbing up small palms and saplings, looking for nutrients in leaves caught above the ground. At times I felt that if I stood still long enough they’d start climbing me too. Due to their strong investment in roots and in leaf defenses, these trees invest much less in height and girth, and the forest is generally shorter with many small stems. Sometimes, the canopy in these forests opens up completely and the ground is dominated by massive ground-dwelling bromeliads. Really weird stuff [see photos at the end of the article].”

The distinct nature of the forests is so strong that it can be viewed in satellite images. Higgins says their findings add a new layer to current understanding of Amazonian ecosystems.

“We propose that geology provides a framework over which variations due to climate are superimposed. In any case, the existence of large-area units in Amazonian forests strongly supports the ecoregion-based mapping and planning of the WWF, The Nature Conservancy, and others. However, our findings also suggest that these maps may need to be substantially redrawn to reflect these underlying divisions.”

The identification of such broadly different ecosystems should also play a role in conservation efforts argues the paper. For example forests in the bizarre Nauta Formation have been largely ignored to date both by conservationists and researchers.

“These poor-soil forests are distributed across northern Peru, but are essentially unknown and severely underrepresented in existing protected areas,” explains Higgins. “One of the most common plant species found on these poor soils was previously unreported in Peru prior to our work, and we have found populations of bird species that are otherwise unknown except for small patches in northern Peru. In short, we believe that many of these rare species will turn out to be widespread. The new Nanay River Protected Area in northern Peru is a good start, but our findings suggest there is much more to be done. Luckily, mapping and protecting these unique ecosystems could be achieved in months rather than decades given the tools we describe.”

Higgins adds that conservation should be more focused on protecting the great variety of the world’s ecosystems, instead of simply pursuing protection of charismatic habitats that draw considerably more attention and dollars.

“For me, the aim of conservation planning is to ensure that the full range of ecosystems are represented in protected area systems. Simply protecting the most species-rich, or the most tall and impressive forests will only protect one environment and one set of evolutionary strategies, and this is not the future I am aiming for,” he says. “Instead, we should aim to include the full spectrum of ecosystems and evolutionary strategies in our protected areas. I think that this is also a much more compelling strategy than chasing hotspot after hotspot, or simply following political expediency.”

Behind the curtain: the Andes

The research doesn’t end there: Higgins and colleagues next sought determine how had this happened: how is it that the Amazon ecosystem could shift from one ecosystem to another in some cases within a few hundred meters?

“Based on our results, the geological and biological patterns we see in lowland Amazonia are the result of the uplift of the Andes mountain range, hundreds to thousands of kilometers away. The Andean uplift creates these patterns through its control of drainage patterns in the vast Amazon basin, alternately depositing and eroding massive geological formations. This has happened in three phases spanning 25 million years, all of which contribute to the patterns we see today,” says Higgins.

The story begins around 25 million years ago when the Andes began to rise, the geologic uplift created a massive water body across parts of today’s Amazon.

“Because these were very low-energy conditions, sediments were able to settle without too much leaching or removal, resulting in a very deep band of fertile sediments called the Pebas Formation,” says Higgins. As the Andes continued to rise from 10-5 million years ago, swift-moving rivers appeared, including the Amazon River. But this was a high-energy environment and sediments lost their nutrients, causing “the Pebas Formation [to be] buried beneath a shallow band of low-fertility sediments called the Nauta Formation (in Peru) or the Ica Formation (in Brazil).”

Finally, erosion over the past five million years in western Amazonia has led to the exposure of the Pebas Formation in some regions. 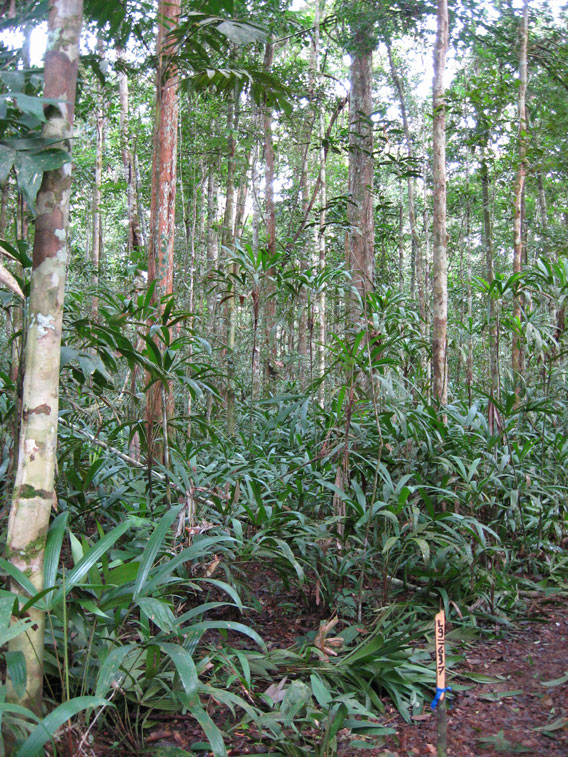 A typical Nauta forest—open canopy with lots of small stems, and lots of Iripaja (a ground palm) in the understory. Photo courtesy of Mark Higgins. 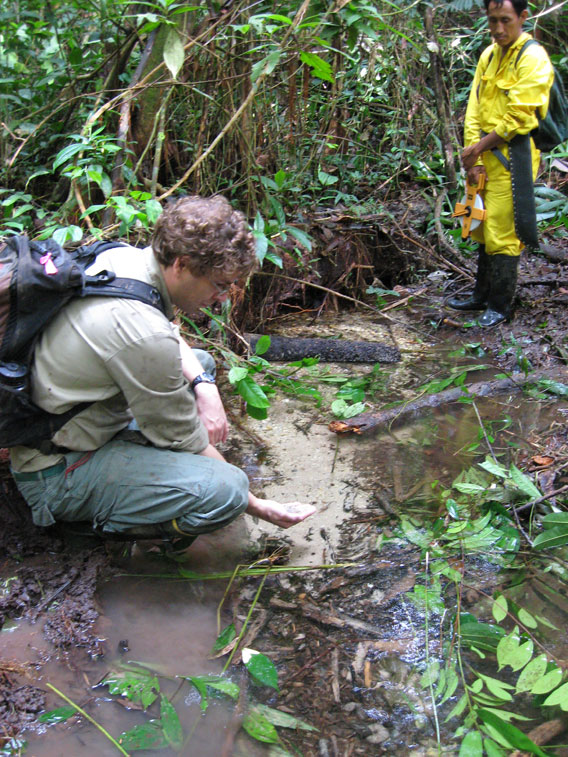 The white sands that we see on the Nauta soils. Photo courtesy of Mark Higgins.

(09/26/2011) The Amazon rainforest can recover fromlogging, but has a far more difficult time returning after repeated burning, reports a new study in mongabay.com’s open-access journal Tropical Conservation Science. In areas where the Amazon had been turned to pasture and was subject to repeated burning, Visima trees become the dominant tree inhibiting the return of a biodiverse forest. The key to the sudden domination of Visima trees, according to the study, is that these species re-sprout readily following fires; a capacity most other Amazonian trees lack.

Picture of the day: where the Andes meets the Amazon rainforest

(09/04/2011) The zone where the Amazon rainforest meets the Andes mountains is the most biodiverse place on Earth. Large amounts of rainfall and altitudinal gradients create a variety of microclimates and niches that are exploited by a wide range of species. The Western Amazon—especially its submontane and montane forests—are also poorly known due to their inaccessibility. Only a few research sites have been studied extensively.