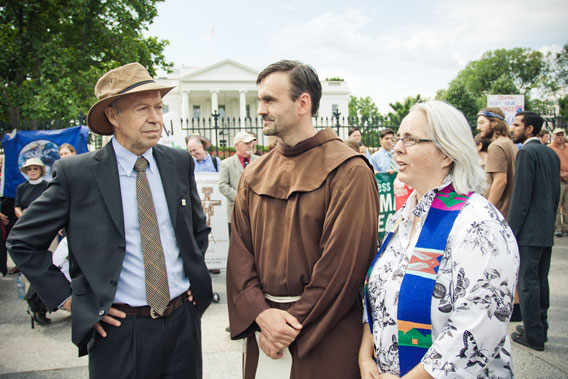 Two weeks of climate disobedience at the White House ended over the weekend with 1,252 people arrested in total. Activists were protesting the controversial Keystone XL pipeline in an effort to pressure US President Barack Obama to turn down the project. If built the pipeline would bring oil from Alberta’s tar sands through six US states down to Texas refineries. While protestors fear pollution from potential spills, especially in the Ogallala Aquifer which supplies water to millions, the major fight behind the pipeline is climate change: Canada’s tar sands emit significantly more carbon than conventional sources of oil.

Renowned NASA climatologist, James Hansen, raised awareness of the issue when he wrote that if the tar sands are exploited along with coal reserves “it is essentially game over” for the climate. Hansen was arrested on Day 10 of the protests.

What was once a relatively obscure issue impacting 6 states has galvanized environmentalists across all 50 states. After years of disappointment on environmental issues it has become a litmus test of the Obama administration’s dedication to fight climate change as he promised to do in his 2008 campaign.

“It’s not the easiest thing on earth for law-abiding folk to come risk arrest. But this pipeline has emerged as the single clear test of the president’s willingness to fight for the environment,” author, activist, and head of 350.org Bill McKibben said in a statement prior to being arrested early on in the protests. “So I wore my Obama ’08 button, and I carry a great deal of hope in my heart that we will see that old Obama emerge.”

However, during the two weeks of civil disobedience, the ‘old Obama’ was decidedly absent as number of administration decisions further frustrated protesters. An environmental impact assessment of the pipeline found that it would have ‘no significant impact’ on the environment, but neglected to address what campaigners say is the biggest and most obvious impact: climate change. Then on Friday the Obama Administration backed down on setting regulations on smog standards that scientists say are necessary for public health. After years in the making, the sudden drop of the planned regulations shocked many.

“For two years the Administration dragged its feet by delaying its decision, unnecessarily putting lives at risk. Its final decision not to enact a more protective ozone health standard is jeopardizing the health of millions of American, which is inexcusable,” said Charles D. Connor, President and CEO of the American Lung Association.

A litany of recent decisions against environmental protections—including opening up the Arctic to oil drilling—have pushed environmentalists to increasingly view the administration with wariness, instead of as allies.

Michael Brune, executive director of the Sierra Club, told the New York Times that if the Keystone XL pipeline is rubber-stamped by Obama it will have large-scale political impact on an administration that is already being seen as weak and cowardly by many of its past supporters.

“It will be increasingly difficult to mobilize the environmental base and to mobilize in particular young people to volunteer, to knock on thousands of doors, to put in 16-hour days, to donate money if they don’t think the president is showing the courage to stand up to big polluters,” Brune said.

The Keystone XL Pipeline would carry around 800,000 barrels of oil every day 1,700 miles from the tar sands Alberta. Extracting oil from the tar sands is both difficult and energy intensive. The oil—which exists in the form of bitumen and is mixed with clay, water, and sand—must be extracted from the ground with hot water and upgraded by using a high energy process. To make a single barrel of oil two tons of oil-sands and three barrels of water are required. In terms of carbon emissions, Cambridge Energy Research Associates (CERA) estimated the greenhouse gas emissions of the tar sands was 5-15 percent higher than conventional sources, while the International Energy Agency (IEA) found that emissions were 20 percent higher.

“I want to emphasize that I am not opposed to pipelines,” Heineman wrote. “I am opposed to the proposed Keystone XL Pipeline route because it is directly over the Ogallala Aquifer. The aquifer provides water to farmers and ranchers of Nebraska to raise livestock and grow crops.” The Ogallala Aquifer spans eight states and provides around one-third of the nation’s irrigation water.

Many of the states that would be directly impacted by an oil spill from the pipeline are so-called Red States.

Heineman was joined in opposition to the pipeline by Governor of Vermont, Peter Shumlin, a democrat. Vermont has recently seen record flooding from Hurricane Irene, which Shumlin linked directly to climate change.

“Our nation must come together to find local, clean, renewable energy to reduce our carbon footprint and spur the economy,” Shumlin wrote in a letter opposing Keystone XL, adding, “we need to find sources that will mitigate the impacts of climate change as much as possible for Vermont and the United States.”

An op-ed from the New York Times also came out against the proposed pipeline, citing a recent report by Canada’s environment ministry which estimates production in tar sands will jump to 1.8 billion barrels a day by 2020.

“That rate will mean cutting down some 740,000 acres of boreal forest—a natural carbon reservoir.[…] greenhouse gas emissions from the oil and gas sector as a whole will rise by nearly one-third from 2005 to 2020—even as other sectors are reducing emissions,” reads the editorial.

Still all signs point to the likelihood that the Keystone XL pipeline will be approved. Even Energy Secretary Steven Chu, who has long been outspoken about the need to fight climate change, has said he views Keystone XL pipeline as ‘tradeoff’. President Obama may be little aware of the protests themselves: when press secretary, Jay Carney, was asked if the President knew about the civil disobedience outside the White House, Carney responded, “I haven’t talked to him about it.”

Proponents of the pipeline say it will provide jobs and make the US less reliant on the Middle East for oil. However, a recent report by Oil Change International claimed that much of the oil would likely be sold overseas and not consumed in the US.

The US is the world’s biggest consumer of oil: in 2009 it is estimated that the US consumed 18,690,000 barrels of oil a day or 6.8 billion a year. It is also the world’s largest importer. Although US politicians have long paid lip service to the nation’s addiction to oil and its impact on both the environment and foreign policy, almost nothing has been done to stem the addiction. In fact, for decades the US has focused on importing more from abroad and drilling more—including off-shore drilling—rather than curbing consumption. The one thing the Obama Administration has done on this front is raise efficiency standards for vehicles, though that has not appeased activists who see a need for the federal government to propel the US to move beyond the age of fossil fuels.

“If the tar sands pipeline is approved, we will be back and we will grow,” Hansen said. “For the sake of our children and our grandchildren, we must find somebody who is working for our dream.” 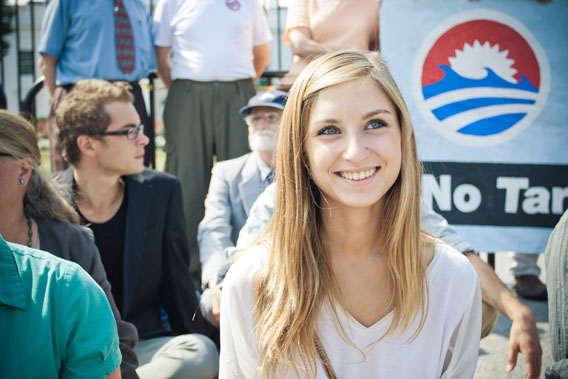 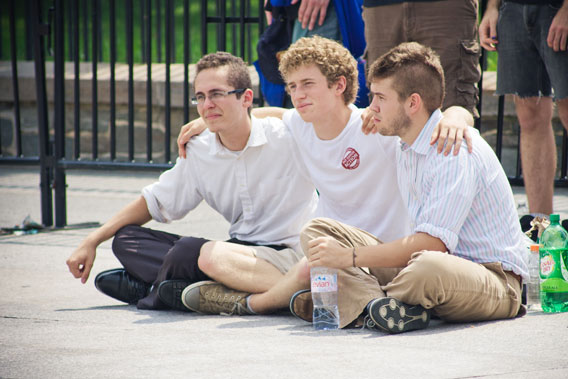 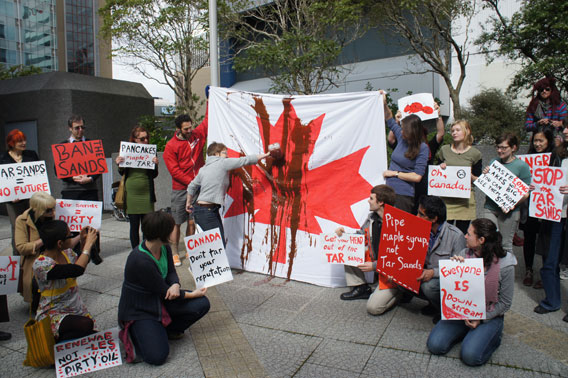 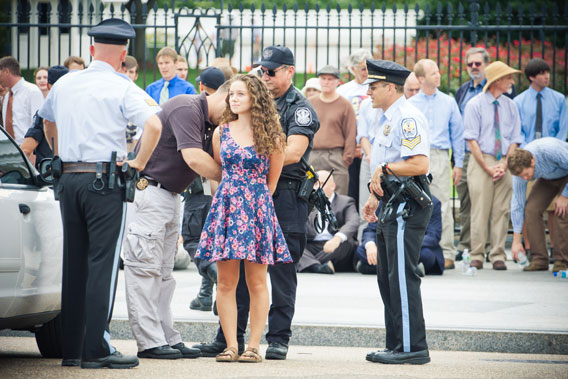 young woman is placed in handcuffs and arrested in front of the White House. Photo by: Josh Lopez/Tar Sands Action.

(08/30/2011) As arrests over a two week long civil action against the Keystone Pipeline XL rise to nearly 600 people, Bill McKibben, head of 350.org, debated Robert Bryce, Manhattan Institute for Policy Research, on the issue on PBS.

Picture of the day: activists rally at White House against tar sands pipeline

(08/29/2011) A two week long civil action is taking place in front of the White House in an attempt to convince the Obama Administration to turn down the Keystone Pipeline XL, which would bring oil from Alberta’s tar sands to the US market.

(08/22/2011) In the first two days of a planned two week sit-in at the White House in Washington DC, over 100 activists against the Keystone XL pipeline have been arrested, reports Reuters. If approved by the Obama Administration, the 1,700 mile pipeline would bring around 700,000 barrels of oil daily from Canada’s notorious tar sands to oil refineries in Texas.

(09/01/2011) Recent, unprecedented walrus haul-outs and increased instances of long-distance swims by polar bears show the direct impacts on wildlife of dwindling Arctic sea ice from climate change. These threatened species also face the prospect of offshore drilling in the Arctic after the Obama Administration recently approved a number of plans to move forward on oil exploration. At least 8,000 walruses hauled out on an Alaskan beach along the Chukchi Sea on August 17. Only a day before, the U.S. Geological Survey announced it would begin tagging walruses near Point Lay, Alaska to study how a lack of sea ice is affecting the species

Shell spills over 50,000 gallons of oil off Scotland

(08/16/2011) Yesterday, Royal Dutch Shell estimated that to date 54,600 gallons of oil had spilled into the North Sea off the east coast of Scotland, spreading some 19 miles wide (30 kilometers) at its maximum. While the company stopped the initial leak on Thursday, it has now announced that the oil has found a ‘second pathway’ and is still leaking into the sea around 84 gallons a day.

Climate activist sentenced to 2 years in jail for civil disobedience

(07/27/2011) Yesterday a federal court in Salt Lake City, Utah convicted climate activist Tim DeChristopher of defrauding the US government, sentencing him to two years in jail and a fine of $10,000, reports the Associated Press. In December 2008, Tim DeChristopher, won the mineral rights for 22,500 acres of US Interior Department land at a Bureau of Land Management auction with a $1.8 million bid. The only problem was: DeChristopher did not have the money to pay for his bid nor did he ever intend to pay for his drilling rights. Instead, he was committing civil disobedience in order to draw attention to the oil industry and government’s complacence on global climate change; in his words, DeChristopher meant to ‘expose, embarrass, and hold accountable the oil industry to the point that it cut into their $100 billion profits’. However, his actions have now landed him in jail.