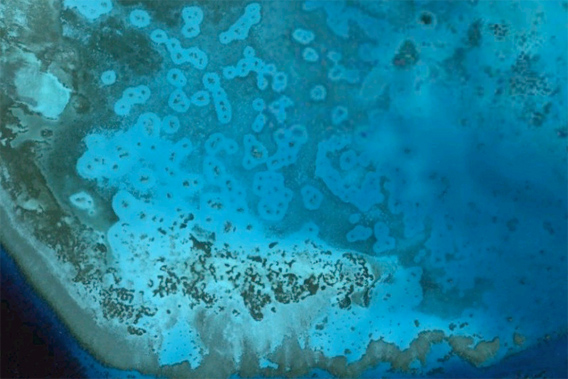 From the all-seeing eye of Google Earth, one can spy the tip of Mount Everest, traffic on 5th Avenue in Manhattan, and the ruins of Machu Picchu, but who would have guessed everyone’s favorite interactive globe would also provide marine biologists a God’s-eye view of fish behavior? Well, a new study in the just-launched Scientific Reports has discovered visible evidence on Google Earth of the interactions between marine predators and prey in the Great Barrier Reef.

“Freely-available satellite imagery of the entire Earth’s surface via Google Earth allows examination of landscape features in even the most remote areas, including difficult-to-access habitats within them,” the paper’s authors write, adding that, “here we demonstrate […] it is possible to remotely observe the landscape-scale footprint of behavioral interactions between predators and prey on shallow coral reefs.”

Studying the satellite imagery of lagoons around remote and protected Heron Island in the Great Barrier Reef, researchers found that they could easily identify a phenomenon known as ‘grazing halos’. Scientists believe these ‘grazing halos’ are created by hungry herbivorous fish and sea urchins who pick a region clean of seaweed, revealing the substrate beneath. Seeking protection from predators in a reef, these herbivores venture out to feed only so far, creating a halo-shape around their refuge. Therefore, these areas are the result of a complex game of cat-and-mouse between marine predators and their cautious prey.

“The collective antipredator behavioral patterns of small herbivores are sufficient to shape the distribution of vegetation on a scale clearly visible from space,” the authors state.

After observing the distinct halos on Google Earth, researchers then ventured to Heron Island to examine the evidence on the ground. They found that herbivores grazed outward from patch reefs in a 9 meter radius, leaving the area bare of seaweed but covered in algae. Wariness of predators likely keep the plant-eaters from straying further.

The research adds further evidence of the important role predators have in shaping the world’s ecosystems, since such grazing halos likely do not occur in ecosystems where marine predators have been wiped out by fisheries. Other studies have shown an analogous impact between land animals, such as wolves and elk. For example, the presence of wolves restrains elk herds from overgrazing, allowing forests—and biodiversity—to flourish.

The scientists believe their study could be replicated again in both marine and land environments in order to “remotely [monitor] predator-prey interactions through the patterns they generate over the landscape.” With such easy-to-access data, researchers could, according to the paper, quickly and cheaply monitor how effectively parks safeguard predator populations.

(06/08/2011) How do you celebrate World Oceans Day? Well, if you’re Google you make the oceans of the world’s most impressive interactive digital globe, Google Earth, come alive. With oceanographers at Columbia University’s Lamont-Doherty Earth Observatory, Google Earth has fine-tuned its oceans’ resolution in selected areas from 1 kilometer to just 100 meters.

(05/24/2011) The Save the Redwoods League is partnering with Google Earth Outreach and iNaturalist.org to connect citizens and scientists in an effort to track the effects of climate change on redwood trees and forests.