Sharks dwell in the ocean, wolves on land; sharks are a type of fish, wolves are a mammal; sharks go back some 400 million years, wolves only some 2 million years. So, these animals should have little in common, right? However, a new study in Frontiers in Ecology and the Environment points to surprising similarities among these disparate animals. As top predators, both wolves and sharks impact their prey and other species in similar ways.

By examining interactions between sharks and their prey, dugongs, in Australia, researchers found a number of commonalities between how wolves impacted elk when reintroduced to Yellowstone National Park in the US.

Top predators do not only keep prey populations in check, but, according to a number of studies, establish an ‘ecology of fear’ in their prey, whereby the prey’s day-to-day behavior is constantly affected by the predator’s presence, i.e. shark and wolf. These impacts go far beyond predator and prey: research has shown that the presence of such predators can significantly impact a whole trove of species from plants to other animals. 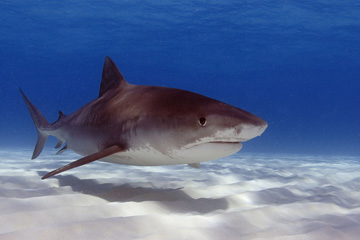 “For too long we’ve looked at ecosystem functions on land and in the oceans as if they were completely separate,” said co-author William Ripple with the Department of Forest Ecosystems at Society at Ohio State University in a press release. “We’re now finding that there are many more similarities between marine and terrestrial ecosystems than we’ve realized. We need to better understand these commonalities, and from them learn how interactions on land may be a predictor of what we will see in the oceans, and vice versa.”

Past research has shown that the reintroduction of wolves in Yellowstone National Park reined in elk populations and kept elk wary and nervous, changing their feeding patterns. This change in the elk’s behavior lead to what is known by ecologists as a ‘trophic cascade’, whereby adding wolves to the environment spread ripples down throughout the entire food chain. Many local plants—long devastated by elk overgrazing—were suddenly returning.

“The removal of top predators from landscapes allows, via reduced predation and predation risk, unimpeded foraging by large herbivores such as elk and deer,” explained Dr. Robert Beschta, to mongabay.com for a previous story. “Heavy utilization of plants by these animals, over time, can greatly alter the composition of plant communities and thus impact other animals that are dependent upon these plants as part of their life cycles.”

With the wolves return, trees grew more abundantly, which heralded a population explosion of another mammal in Yellowstone National Park: the beaver.

Sharks, like wolves, have similar impacts according to Ripple’s study. Where sharks are abundant, dugongs—large mammalian herbivores—are forced by the ecology of fear to move their grazing areas just like elk. This allows seagrass meadows to recover, providing particular habitat for a host of marine biodiversity, both plant and animal.

The authors say their study should warrant more discussion between marine and terrestrial ecologists in the surprising similarities above and below water.

Over 30 percent of open ocean sharks and rays face extinction

(06/25/2009) The first global study of open ocean (pelagic) sharks and rays found that 32 percent of the species are threatened with extinction largely due to overfishing and bycatch, making pelagic sharks and rays more threatened than birds (12 percent), mammals (20 percent), and even amphibians (31 percent), which are considered to be undergoing an extinction crisis. The situation worsens when only sharks taken in high-seas fisheries are considered: 52 percent of these species are threatened.

(11/02/2009) As hunting wolves is legal again in two American states, Montana and Idaho, researchers have discovered an important role these large predators play in creating nutrient hotspots in northern forest environments. Researchers from Michigan Technological University found that when wolves take down their prey—in this case moose—they do more than simply keep a check on herbivore populations. The corpses of wolf-hunted moose create hotspots of forest fertility by enriching the soil with biochemicals. Due to this sudden up-tick in nutrients, microbial and fungal growth explodes, in turn providing extra nutrients for plants near the kill.

(05/07/2009) On Monday the gray wolf was removed from the Endangered Species Act (ESA) in Idaho and Montana, two states that have protected the wolf for decades. According to the federal government the decision to remove those wolf populations was based on sound conservation science—a fact greatly disputed in conservation circles. For unlike the bald eagle, whose population is still rising after being delisted in 1995, when the wolf is removed from the ESA it will face guns blazing and an inevitable decline.

(11/06/2008) Sharks are disappearing from the ocean at startling rates: currently one-in-five of these famous marine predators are threatened with extinction. According to a report from the Australian Government and TRAFFIC—an organization that monitors wildlife trade both legal and illegal—the collapse of shark populations is being caused largely by rising demand for shark fin in Asia. The report shows that legal fishing for sharks has become nearly as detrimental as illegal, since few fisheries have management strategies concerned with sustainability.