Fish doesn’t just feed humans. Millions of tons of fish are fed every year to chickens, pigs, and even farmed fish even in the midst of rising concerns over fish stocks collapses around the world. Finding an alternative to fish as livestock feed would go a long way toward preventing the collapse of fish populations worldwide according to a new paper in Oryx.

“Thirty million tons – or 36 per cent – of the world’s total fisheries catch each year is currently ground up into fishmeal and oil to feed farmed fish, chickens and pigs,” world-renowned fishery researcher and co-author,
Daniel Pauly, told the University of British Colombia (UBC).

“Twenty-five per cent of infants in Peru—which produces half of the world’s fishmeal using anchovies—are malnourished,” says Pauly.

Although it has long been known that ocean life is undergoing a crisis due to overfishing—for example, predatory fish populations have dropped 90 percent since the 1950s—little action has been taken to stop impending collapses. The researchers argue that finding an alternative to feed pigs, chicken, and farmed fish would be an important start.

“Globally, pigs and chickens alone consume six times the amount of seafood as US consumers and twice that of Japan,” lead author Jennifer Jacquet told UBC. “Ultimately these farm animals have a greater impact on our seafood supplies than the most successful seafood certification program.” Jacquet is a post-doctoral fellow at the university’s Fisheries Centre.

“We should work to eliminate the use of tasty fish for livestock production. It’s a waste,” adds Pauly. “Plus, it is not what pigs or chickens naturally eat. When is the last time you saw a chicken fishing?” 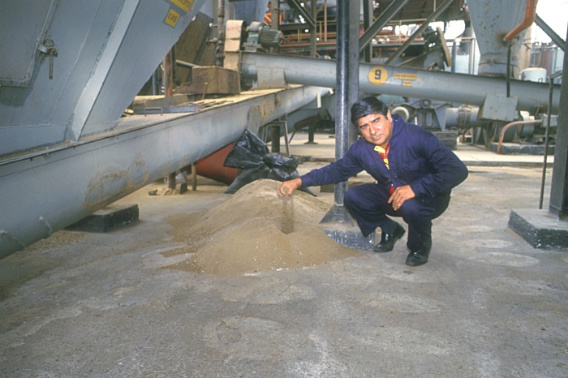 (09/09/2009) The ever-growing demand for fish and fish oil due to their omega-3 fatty acids has led to exponential growth in the aquaculture industry—and depletion of the world’s oceans. While aquaculture is farmed fish, the fish are fed with wild marine species.

(07/30/2009) New research reveals hopeful signs that overfished marine ecosystems can recover provided adequate protections. The two-year study, publish in the journal Science, found that efforts to reduce overfishing are beginning to succeed in five of the ten large marine ecosystems examined, suggesting that “sound management can contribute to the rebuilding of fisheries.”

Madfish?: scientist warns that farmed fish could be a source of mad cow disease

(06/17/2009) In a paper that shows just how strange our modern world has become, Robert P. Friedland, neurologist from the University of Louisville, warns that farmed fish could be at risk of Creutzfeldt Jakob disease, or mad cow disease.

Marine scientist calls for abstaining from seafood to save oceans

(06/08/2009) In April marine scientist Jennifer Jacquet made the case on her blog Guilty Planet that people should abstain from eating seafood to help save life in the ocean. With fish populations collapsing worldwide and scientists sounding warnings that ocean ecosystems—as edible resources—have only decades left, it is perhaps surprising that Jacquet’s call to abstain from consuming seafood is a lone voice in the wilderness, but thus far few have called for seafood lovers to abstain.