In a Perspectives piece in Science, John R. Regalbuto argues that the world will soon see a revolution in biofuels, but not those made from corn. Instead Regalbuto, program director of Catalysis and Biocatalysis at the National Science Foundation, says that the future of biofuels is in substances that can be converted into liquid hydrocarbons, such as switch grass, woody biomass, corn stover, and even algae.

“Hydrocarbon biofuels” carry a number of advantages, according to Regalbuto. First, they can be made from nonfood sources. As well, these biofuels will be “drop-in replacements for gasoline, diesel, and jet fuel,” Regalbuto writes. With hydrocarbon biofuels there will be no need to make a ‘biofuel friendly engine’: these biofuels can simply be added directly to your existing tank.

Finally, at only two-thirds the energy density of gasoline, ethanol cannot compete with gasoline as an energy source: transportation powered by ethanol gets about 30 percent lower gas mileage. Yet, hydrocarbon biofuels’ gas mileage will be competitive with gasoline.

However, there is a reason why no one is filling their cars with liquid wood yet. The major difficulty facing cellulosic biofuels, those made from woods or grasses, is cost. Standard production of biofuels from woody biomass is currently double that of ethanol. Yet in recent years, creative researchers have found several ways to make the production of cellulosic biofuels competitive with both ethanol and gasoline. 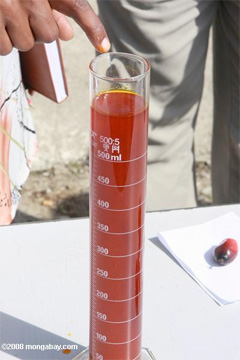 One method is to replace the yeast used to ferment the biomass’ sugar with genetically altered microorganisms. Using such microorganisms researchers have been able to convert woody biomass into fuel at the same rate as corn into ethanol. Another method is to skip fermentation altogether, and convert dissolved sugars into hydrocarbon biofuels through a process that is not dissimilar from petroleum processing.

Researchers have also worked on converting biomass into fuel by way of prolysis: this means that instead of processing the sugars, the biomass is first turned into an intermediate substance called bio-oil. This bio-oil is “very acidic, unstable, and too low in energy content to be a viable fuel,” writes Regalbuto. “The bio-oil therefore has to be stabilized and upgraded in a subsequent catalytic step.” Several companies are using this process (see list below).

Finally, algae are also back on the table as a possible fuel source. Algae have a particular advantage over the fuels described above: it can be produced without using up finite land or potable water. The main hurdle is economic, but this hasn’t stopped increasing interest in research and even predictions of commercial production within a decade.

While the advantages of hydrocarbon biofuels over ethanol are clear, the sudden second-generation biofuels mania has produced concerns. Scot Quandra, director of the Dogwood Alliance which fights to protect embattled forests in the Southern United States, sees possible disaster in the rush to create cellulosic biofuels in particular.

“More forests will be cut down, a greater number of greenhouse gases will be released into the atmosphere, air and water quality will be compromised, and our already taxed water supply will be further depleted, threatening both our environment and quality of life,” Quandra told Mongabay in an interview last October. “The [cellulosic biofuels] industry states it will initially rely on ‘wood waste’ for production. As it stands now, over 90% of all wood waste from sawmills and paper production is already accounted for and the additional waste would mean stripping every last twig from the forest when they are clear-cut leaving nothing behind to replenish the soils, slow sedimentation or provide wildlife habitat.”

Considering that ethanol was only recently touted as the ‘green’ alternative to gasoline before becoming reviled by many environmentalists and culpable, at least in part, for the global food crisis, warnings about these new biofuels should not be dismissed outright.

Yet whether the prospect of hydrocarbon biofuels leaves one filled with hope or dread, second-generation biofuels from a variety of sources are on their way. Large corporations, driven by visions of dollar signs, are pursuing them aggressively; policy-makers, hoping for a petroleum-replacement, are already imposing quotas; and many environmentalists, desiring a rapid decline in greenhouse gases, are rallying them on. It’s only a matter of time.

Regalbuto writes about a number of companies which are currently working on hydrocarbon biofuels. A partial list is below.

CHOREN Industries: Converting biomass into electricity or heat in gas engines through a multi-stage gasification process.

Ensyn: Employing pyrolysis to create a bio-oil to be used as heating oil.

KiOR: Using waste from forestry and agriculture for biofuels, intends to market a product within two years.

Sapphire Energy: Farming algae for biofuels production, plans to have a product by 2016.

Synthetic Genomics, Inc.: Using algae for biofuels. The company hopes to be in production within 5-10 years. Partnered with ExxonMobil.

Virent Energy Systems: Developed a process to convert water-soluable sugars into gasoline. The company expects to be ready for commercial production in 5-7 years. Partnered with petroleum giant Royal Dutch Shell.

(05/07/2009) Yesterday the Obama Administration established a Biofuels Interagency Working Group to oversee implementation of new rules and research regarding biofuels. On the group’s first day of work they would do well to look at a new study in Science Magazine comparing the efficacy of ethanol versus bioelectricity.

Cellulosic ethanol healthier, better for the environment, than corn ethanol

(02/03/2009) Ethanol produced from switchgrass, prairie biomass, and Miscanthus will reduce the environmental and health impacts of expanded biofuels production relative to using corn as a feedstock, report researchers writing in the journal Proceedings of the National Academy of Sciences.

(10/16/2008) Cellulosic biofuel is on its way. This second generation biofuel — so-called because it does not involve food crops — has excited many researchers and policymakers who hope for a sustainable energy source that lowers carbon emissions. However, some believe that cellulosic biofuel may prove less-than-perfect. Just as agricultural biofuels have gone from being considered 'green' to an environmental disaster, some think the new rush to cellulosic biofuel will follow the same course. Scot Quaranda is one of those concerned about cellulosic biofuel’s impact on the environment. Campaign director at Dogwood Alliance, which he describes as "the only organization in the Southern US holding corporations accountable for the impact of their industrial forestry practices on our forests and our communities", Quaranda condemns cellulosic biofuels as dangerous to forests “by its very definition”.