Markets could save forests: An interview with Dr. Tom Lovejoy

Market mechanisms are increasingly seen as a way to address environmental problems, including tropical deforestation. In particular, compensation for ecosystem services like carbon sequestration — a concept known by the acronym REDD for “reducing emissions from deforestation and degradation” — may someday make conservation a profitable enterprise in which carbon traders are effectively saving rainforests simply by their pursuit of profit. Protecting rainforests and their resident biodiversity would be an unintentional, but happy byproduct of money-making endeavors.

While the idea may seem far-fetched at present, many people are working feverishly on the policy side to make the concept a reality. Few are more qualified to work on these issues than Dr. Thomas Lovejoy, a conservation biologist who has authored scores of articles and books and currently serves as president of the Heinz Center, an environmental policy group.

“Chances of saving rainforests by appealing to the profit motive have increased sharply over the last five years,” Dr. Thomas Lovejoy, who is also a senior adviser on biodiversity to the World Bank and the United Nations Foundation, told Mongabay.com in an interview. “We’re seeing the beginning of market mechanisms for preserving the environment.”

Credited with coining the term “biological diversity”, developing the concept of a “debt-for-nature swap”, and founding the world’s longest-running tropical biology experiment, Lovejoy is recognized as a leading expert on subjects ranging from tropical ecology to conservation finance to environmental policy. An advisor to some of the world’s top-ranking policymakers, Lovejoy previously served as director of the World Wildlife Fund-US, Assistant Secretary for the Smithsonian Institution, president of the American Institute of Biological Sciences, chairman of the United States Man and Biosphere Program, and president of the Society for Conservation Biology. Today he serves on the board of a number of scientific and advisory groups.

In a March 2008 interview with mongabay.com, Lovejoy discussed his work and his outlook for market-based conservation.

An interview with Dr. Thomas Lovejoy

Mongabay: What are the objectives of the Heinz Center?

Global change goes well beyond climate change to look at all the inter-related things that are altering the ecological balance of the planet including land use change, biodiversity loss, the nitrogen cycle, and methane emissions. Recognizing that it is no longer a choice between mitigation and adaptation, our global change strategy looks at both mitigation and adaptation. Every two years in conjunction with the Global Energy Assessment (for which we are the U.S. node) we release reports that look at new technology and energy sources like biofuels. We’ve also done pioneering work on what we call ecothresholds — thresholds in ecosystems that once crossed will present serious adaptation challenges for mankind.

In what is traditionally called environmental reporting, we work on indicators. In this area we look at things like carbon accounting and other ecosystem services. We are publishing a report (The State of the Nation’s Ecosystems) this year.

So that’s a rapid run through of the kinds of things the Heinz Center is likely to be involved in.

Mongabay: Are you looking much at market mechanisms for addressing things like deforestation? Specifically REDD or avoided deforestation?

Dr. Tom Lovejoy: Very much so. We’re seeing the beginning of market mechanisms for preserving the environment. This is the type of subject John Heinz was engaged in 20 years ago together with Timothy Wirth and Rob Stavins at Harvard: “Project 88” looked at how market mechanisms could work on behalf of the environment, and led to the sulfur market in the Clean Air Act of 1990. John Heinz visited the Amazon and saw the importance of conserving biodiversity and ecosystem services.

Regarding REDD, I had a meeting here yesterday with a group looking for the best way to advance that agenda — the difficulty being that if you get 190 nations around a table negotiating, it takes forever to get anywhere.

Mongabay: Have you found there’s much support for REDD in Congress and high levels of government?

Dr. Tom Lovejoy: A couple of weeks ago I had three separate phone calls from Capitol Hill about REDD so there is definitely interest. The big challenge is that at the international level negotiations are overly defined by national self interests and worries about details instead of the scale of the problem we’re facing. We’ve got to get that agenda moving forward.

I’m very interested in major amounts of money becoming available for ecosystem services. We’re first going to see this in terms of carbon. A lot of the rainforest countries have shown an interest in REDD — not all of them, but even Brazil has gotten closer to being open to the concept.

Mongabay: Are you envisioning payments for ecosystem services beyond carbon?

Dr. Tom Lovejoy: We could but I think it’s a lot easier to start with carbon. We’re working with the state of Mato Grosso on carbon accounting.

Mongabay: You mention Brazil — it always seems to be concerned about it sovereignty?

Dr. Tom Lovejoy: You just have to work with Brazil in a way that will by respectful of that sensitivity.

Mongabay: Do you find that there is more interest in conservation in Brazil now than there was 10 years ago?

Dr. Tom Lovejoy: Huge. The governor of the state of Amazonas is using money out of his budget to compensate some communities for environmental services. In the last several years Brazil by itself has set aside 40% of the land area in the world total on new protected land.

Mongabay: Switching gears a bit, in the 1970s you developed a simple but critically important experiment in the Brazilian Amazon. Can you elaborate on this experience, perhaps what drove you to establish the forest fragments project and you thoughts on its success? Did you expect that it would go on as long as it has? 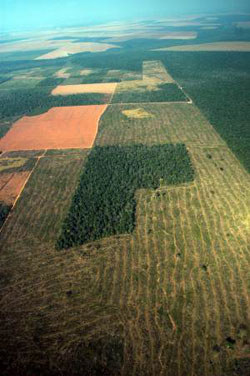 Mosaic of forest and agriculture. Courtesy of WHRC

Dr. Tom Lovejoy: I initated the Forest Fragments Project (first known as The Minimum Critical Size of Ecosystems Project, later as the Biological Dynamics of Forest Fragments project) together with Brazilian colleagues because there was a great controversy about how big protected areas should be — which is better a single large or several small reserves? The “SLOSS” debate in one sense was about the applicability of island biogeographic theory to rserve design, and it flourished as a controversy because there was so little direct data. Consequently I designed the project to do that.

I thought it would run for 20 years, but I had no idea of rates of change and it turns out the 100 ha fragments are still changing relatively slowly. In addition, it accumulated value just as long term data sets, enabling other questions to be asked. On top of that it became a major training exercise for Brazilian and other Amazon nationals in particular. So we eventually concluded that it should be a permanent project.

Mongabay: In the 1980s you pioneered the concept of the debt-for nature swap which has since driven hundreds of millions of dollars toward conservation efforts. What was your inspiration for the program and what do you see for its future? Do you expect to see more debt-for-nature swaps, or will they begin to be replaced by market mechanisms like REDD, or will REDD be applicable in some circumstanes and debt-for-nature applicable in others?

Dr. Tom Lovejoy: I was listening to a hearing on the environmental effects of development bank loans. I realized that the debt itself was causing environmental problems. So I wrote a piece for the New York Times raising the possibility of turning it around so that debt could be used to “Help Debtor Nations’ Ecology” to quote the headline. That was 1984. The first debt swap was done in 1971. We know billions of dollars worth have been carried out but the total is unknown because each nation does it individually and there is no central registry.

Mongabay: What would you recommend the U.S. government do to do a better job promoting rainforest and biodiversity conservation?

Dr. Tom Lovejoy: The single best thing we could do would be to become a leader on climate change. A lot of things would then fall into place. However I’m not going to hold my breath on that until January of next year.

I think there are a number of things that might be done. John Negroponte and Harry Paulson have been quietly working on some promising things and I think we’re going to see some money go into Aceh for forest conservation. So yes indeed, there is interest.

Mongabay: Between scientists and high level policymakers, you really work with a broad range of interests.

Dr. Tom Lovejoy: For whatever it is worth, I’ve been called the Switzerland of Conservation. I work with everybody who’s reasonable.

Mongabay: Overall are you hopeful that the world will be able to rein in deforestation and begin to protect biodiversity more effectively?

Dr. Tom Lovejoy: You’ve got to be. People are talking about things now that they weren’t even six months ago. So I’m hopeful. It’s a matter of looking at it clearly and figuring out where the greatest leverage points are and go for them.

Mongabay: We have new drivers of deforestation — namely biofuels and the run up in commodity prices — do you think that certification schemes could help bring more environmental responsibility to the market?

Dr. Tom Lovejoy: Absolutely. I think there is real interest in some industries. Brazil would love to have everything certified. Its timber exports are totally certified — it’s their internal markets they still need to deal with.

Mongabay: What can individuals do here to help preserve forests and further the move towards sustainability and biodiversity conservation?

Dr. Tom Lovejoy: It’s the usual things. Get people educated on it, make sure your elected officials are educated, and encourage philanthropy in a direction towards sustainability and biodiversity conservation. You should look for ways for your state to engage and take a leadership role on something like this.

The private sector can get involved ahead of some big international policy coming into place. Voluntary markets are a real option for things like REDD.