Rainforests worth $1.1 trillion for carbon alone in Coalition nations


Rainforests worth $1.1 trillion for carbon alone in “Coalition” nations

Rainforests worth $1.1 trillion for carbon alone in “Coalition” nations

If a coalition of developing countries has its way, there could soon be new forests sprouting up in tropical regions. The group of ten countries, led by Papua New Guinea, has proposed that wealthy countries pay them to preserve their rainforests. The Coalition for Rainforest Nations argues that all countries should pay for the benefits — from carbon sequestration to watershed protection — that tropical rainforests provide.

Forests play an important role in the carbon cycle. As forests grow, they absorb atmospheric carbon into their tissues via photosynthesis. The opposite occurs when they are cut, thinned and degraded carbon is released into the atmosphere, contributing to global warming. The UN estimates that 20-25 percent of greenhouse gas emissions come from the destruction and degradation of forests, an amount similar to the volume produced each year by the United States. The Coalition will argue that developing countries should be paid for the amount of carbon locked up by their forests.

Focusing specifically on the value of carbon sequestration the coalition could be talking a lot of money. At the current going rate of $20 for a one-ton unit of carbon dioxide, the forests of Bolivia, Central African Republic, Chile, Congo, Costa Rica, Democratic Republic of Congo, the Dominican Republic, Guatemala, Nicaragua, and Papua New Guinea are worth around $1.1 trillion for their carbon sequestration alone. Of course the forests offer a great deal more value through the other, less measurable services they provide including fisheries protection, biodiversity preservation, erosion and flood control, recreation and tourism value, harvest of renewable products, and water services.


For comparison, a recent study by the Pembina Institute for the Canadian Boreal Initiative found that carbon stored in Canada’s boreal forests and peatlands is worth $3.7 trillion, while the annual value of ecosystem services like water filtration, pest-control services, and carbon storage at $93 billion — roughly 2.5 times greater than the net market value of forestry, hydroelectric, mining, and oil and gas extraction in Canada’s Boreal region. The values can be expected to be similar in tropical countries.

While developing countries will not be asking for or receiving $1.1 trillion, they will present a strong argument at this week’s United Nations summit on climate change in Montreal. Burdened by poverty, the Coalition nations say they cannot be expected to forfeit income from economic activities that result in deforestation, especially while other countries benefit from forest services.

Deforestation of tropical rainforests has a global impact through species extinction, the loss of important ecosystem services and renewable resources, and the reduction of carbon sinks. Recently a study by NASA found a direct impact that tropical deforestation has on the economies of the United States and Europe. Research shows that deforestation in the Amazon region of South America influences rainfall from Mexico to Texas and in the Gulf of Mexico, while forest loss in Central Africa affects precipitation patterns in the upper and lower U.S Midwest. Similarly, deforestation in Southeast Asia was found to influence rainfall in China and the Balkan Peninsula.

Armed with the knowledge that ecosystems in their own backyards are critical to the global economy, Coalition Nations appear to be in a good position to ask for money to conserve their rainforests. Amid growing consensus that climate change is indeed a real threat, increasing concern over catastrophic environmental events like the devastating 2005 Gulf hurricane seasons, and renewed interest in eradicating poverty, there will be considerable political pressure for wealthy countries to sit down at the bargaining table to hammer out some form of agreement that would protect rainforests in exchange for cash.

Should an agreement be reached it is likely that it would include provisions for the restoration of degraded forests and the development of plantations on deforested lands. Tropical countries would then have an incentive to begin replanting the forests that have so rapidly been lost due to logging, commercial and subsistence agriculture, and other forms of development over the past 50 years. Already, private companies are positioning themselves to cash in on the potential windfall. Several firms, including Carbon Capital in London, are forming trading partnerships with developing countries, while others are establishing plantations in tropics.

The nascent carbon trading market could prove to be a model for financing large-scale conservation while simultaneously providing profit opportunities for private firms. While corporations pursuing commercial interests could end up doing a lot of good for the global environment, poor countries could have a new way to capitalize on their natural assets without destroying them. 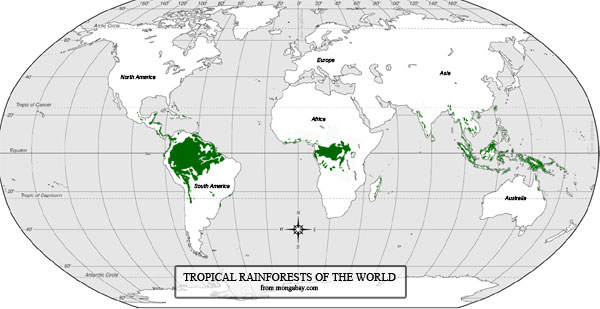 Developing countries: pay us to save rainforests

At this week’s United Nations summit on climate change in Montreal a coalition of tropical developing countries plans to propose that wealthy countries pay them to preserve their rainforests. The group of 10 countries, led by Papua New Guinea and Costa Rica, will argue that they should be compensated for the services rainforests provide the rest of the world.

Rainforests around the world still continue to fall. Does it really make a difference? Why should anyone care if some plants, animals, mushrooms, and microorganisms perish? Rainforests are often hot and humid, difficult to reach, insect ridden, and have elusive wildlife.

Nigeria has the world’s highest deforestation rate of primary forests according to revised deforestation figures from the Food and Agriculture Organization of the United Nations.

The economic benefits of protecting a rainforest reserve outweigh the costs of preserving it, says University of Alberta research–the first of its kind to have conducted a cost-benefit analysis on the conservation of species diversity. “The traditional moral and aesthetic arguments have been made about why we should conserve the biodiversity in rainforests, but little has been done that looks at whether it makes pure economic sense to do so,” said Dr. Robin Naidoo, who did his PhD at the U of A in biological sciences and rural economy. “We provide some good evidence from a strict economic side, that yes, it does.”