Large hydropower dams that obstruct the Amazon basin have long come under fire for their environmental and cultural impact — Belo Monte being the most prominent example. Yet a bigger threat is the cumulative damage from dams created by small hydropower plants and small-scale fish farming, reveals a new study, putting the Amazon’s aquatic ecosystem at risk of “death by a thousand cuts.”

Published in Environmental Science & Policy, the study mapped the density of dams of small hydropower plants (SHPs) up to 30 megawatts and aquaculture farms across the state of Rondônia and the city of Manaus in the state of Amazonas. They identified 6,507 small dams in these regions and determined their collective impact “can be profound in the aggregate,” leading to a loss of biodiversity and increased deforestation rates as well as preventing fish migration and impacting Indigenous livelihoods.

“We found a huge number of these dams, and this worried us because the tributaries in this area of the Amazon are very important,” Carlos Edwar de Carvalho Freitas, the study’s lead author and professor at the Federal University of Amazonas, told Mongabay by phone. “They form a network that’s essential for the basin for both the flow of nutrients and for the connectivity that allows fish migration.”

The Amazon basin is made up of 1,100 free-flowing tributaries that feed the basin’s namesake river and are home to more than 2,500 fish species, representing 15% of the freshwater fish known in the world. The basin’s enormous hydropower potential has prompted the construction of energy-generating dams, mostly in the Tapajós, Xingu, Madeira, Tocantins and Araguaia rivers across the states of Mato Grosso, Goiás, Tocantins and Rondônia.

Rondônia is also a hotspot for small-scale aquaculture, an important income and food source for locals, where farms encompass more than 14,800 hectares (36,571 acres) of water surface over at least 8,000 licensed properties. The state produced 69,590 tons of farmed fish in 2016, representing more than half of the country’s total fish farming.

On an individual level, the dams from these small farms and hydropower units have a minimal impact on the environment, according to the study. In fact, the damage caused by small-scale dams is considered so negligible that hydropower plants with a capacity of up to 30 megawatts can be constructed in some parts of Brazil without an environmental impact assessment. They also benefit from economic incentives and simple licensing procedures, compared with the construction of large hydropower plants, which are restricted by stronger regulations.

However, in high concentrations, dams from both small hydropower plants and aquaculture can “cumulatively cause negative impacts” by breaking up free-flowing rivers into a chain of reservoirs, resulting in connectivity losses four times greater than large hydropower plants. 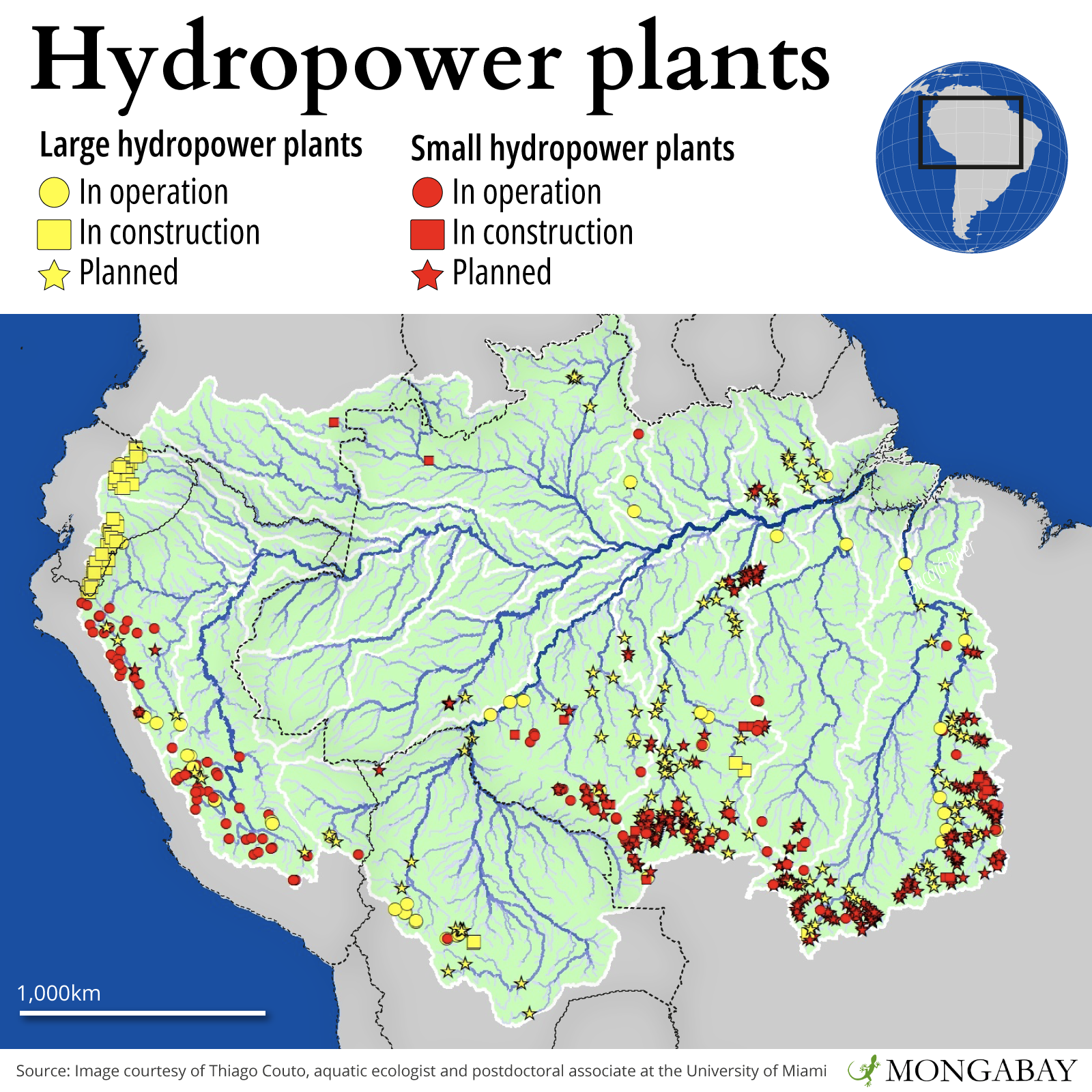 “The dams block the river flow, and the fish can’t live without the rapids,” Flávio Montiel, the interim director of the Amazon Program at NGO International Rivers, told Mongabay in a video call. “They can’t move along the basin, and they can’t migrate, which means they can’t complete their life cycles.”

The dwindling fish populations have a knock-on effect on the region’s millions of Indigenous people and riverside populations, who depend on fish for food and income. “Infrastructure projects, including dam projects of all sizes on or near Indigenous peoples’ territories, can have devastating impacts on Indigenous peoples who depend completely on their lands for their survival, their food, their medicine and their shelter,” Sarah Shenker, campaigner at the Indigenous rights charity organization Survival International, told Mongabay by phone.

The Enawenê-Nawê Indigenous people, who live near the Iquê River in Mato Grosso, are one of many communities that have been unable to catch fish due to the drastic drop in fish stocks since dam construction began in the region. The Enawenê-Nawê don’t eat meat, so fish is an important food source for them.

Hydropower represents 60% of energy generation in Brazil. Across the country, small plants account for 85% of the 1,517 hydropower plants in operation, and they generate just 7% of the country’s hydroelectricity.

“The importance of electrical generation from SHPs is falling due to the rapid price decrease for solar and wind power installations,” according to the 2022 study. “The negative effects of SHPs and aquaculture facilities should be part of the discussion, particularly because the number of small dams seems to be growing without control.”

More than 350 dams are being considered for construction in the South American Amazon basin, including three large hydroelectrics plants in the Brazilian Amazon. Fragmentation from small hydropower dams throughout the Amazon basin is projected to increase by 21% in the future, according to a 2021 study published in Nature Sustainability.

Under the new administration of Luiz Inácio Lula da Silva, who took office in Jan. 1, 98 medium-sized plants will be prioritized for construction, Mauricio Tolmasquim, Lula’s energy adviser, said during a political campaign roundtable in August. During his first and second tenures, between 2003 and 2011, Lula showed support for major infrastructure projects in the Amazon, including the controversial Belo Monte hydropower dam that displaced tens of thousands of people and unleashed devastation on the surrounding environment.

These new hydroelectric dams “are in areas where we already know that there is a probable reduction in flow, which, if that is the case, they become unfeasible,” Natalie Unterstell, president of the Talanoa Institute, a climate policy think tank, told Mongabay by phone. “If Lula is really going to be a green president, build a team for that. They will have to pay attention to that aspect. I think that the chances of such a thing happening are very small.”

During his campaign, Lula showed special interest in Indigenous affairs. He promised to end all criminal activities inside Indigenous territories and said during the COP27 summit that he would create a new Ministry of Indigenous People.

Some experts see the change in government as a chance to review and improve current dam building procedures. Montiel says it could be “an opportunity to create a space of dialogue and understanding of what the main initiatives are and what must be prepared in order to have the right tools to analyze the real impacts of small dams in the Amazon.”

Currently, the process of licensing for small dams is done by the state government and not the federal government, which provides licenses just for big dam projects. This means that “even if the federal government establishes new legal instruments, the state government can avoid these new laws and conduct their own licensing procedures that they think is better,” Montiel said. Brazil’s agriculture powerhouse Mato Grosso, for example, is flexible toward licensing, he said, largely to facilitate the production of soy. “The agribusiness model is connected with the construction of small dams,” Montiel said.

Experts say that current approaches to the environment are outdated in Brazil and need to be improved in order to minimize the environmental damage that coincides with construction.

“The climate has already changed and, at the same time, Brazilian public policies continue to be made in a climate that no longer exists,” Unterstell said. “Anything that is done from now on, be it a small, medium or large hydroelectric plant, will have to take into account the new climate scenarios.”